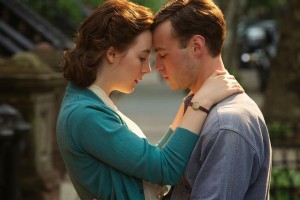 I will begin this review with a warning, an emotional censor’s rating if you like. If you’re one of those people whose tears flow after watching a cat video, you had best avoid this movie. Focusing on a sweet and believable character who is pulled apart by forces beyond her control, the movie adaption of Colm Tóibín’s Brooklyn engages our emotions by engaging our sympathy for the central character right from the start.

Saoirse Ronan’s agreeable face fills up the screen for most of this movie. An Irish actress finally playing a quintessentially Irish girl, she brings dignity to the role, which may not be one of her most interesting, but will likely cement her in the memories of moviegoers. And her character is someone with a lot of dignity, a person who when things happen to her, gets on with it as best she can.

Though I confess to not having read the book, I was introduced to it years ago through a beautifully written review in our archives. So let me enlighten you on the similarities between the book and the movie, as far I’m aware of them. Both seem to explore the idea that emigration is a coin-toss, a gamble you take with everything that is familiar, exchanging it for the unfamiliar in the hopes of something better. But even if this decision is taken with a light heart, the inevitability of the distance between home and abroad, and eventually between the past and future can install rules of fate that are not as easy to gamble away.

Eilis leaves Enniscorthy in County Wexford because she has a good mind, is young and strong, and, like all young people, wants to put her mind and body to use. In making this most natural journey, she unintentionally does an unnatural thing, putting a whole ocean between herself and her beloved sister and mother. She starts work at a department store, gradually overcomes her homesickness and meets a young Italian man who helps her to enjoy life and feel that she owns it for the first time. She studies hard and does exceptionally well at her bookkeeping exams. Eilis begins to blossom and starts wearing the “right” makeup and clothes, gradually drawing away from the unformed young woman who stepped off the boat.

This is a movie about the heart and what it wants. The impulses that the heart feels aren’t rational, and they don’t offer guarantees. But they do give life its movement and color

This transition from a dutiful, mousey Irish Catholic girl to a grown woman is really effective in Ronan’s hands. She plays Eilis with a kind of relish for the changes she’s going through. Partly it’s the work of the movie’s sensitive costume designers too – they put the women in the kind of clothes that suit them, but also look like the clothes they can afford. Women drift by in big gingham dresses or pastel sweaters, and there’s a sense of the ordinariness of it all – girls experimenting with styles, finding what suits them, enjoying a favorite item, like Eilis’s first swimming costume, which is a huge hit when she brings it home. Unlike some period dramas, where the costume-changes are constant, we even see the same clothes reappear more than once, loved and lived in.

Eilis really wears her new life, including the clothes, with the sudden outwardness, the “fake it til you make it” attitude that she’s been taught to adopt in her new homeland. But her confidence becomes self-fulfilling, as we see a young woman begin to understand why it’s alright to enjoy the pleasures of life, letting go a little of the Catholic guilt and small-town begrudgery her hometown has schooled her in.

Eilis is not a complicated character. She doesn’t want a complicated life – she seems to be comfortable enough with commitment and settling down. But despite her simplicity in some ways, her inner life appears sensitive, and it’s here that the movie can’t follow the book. So instead of this, we experience the film as a moving tableau of Eilis’s body and her emotions – the clothes she wears, the emotions that come and go.

And this is where the crying comes in. Saoirse Ronan’s acting is incredibly natural and affecting. There’s a key scene when tragedy hits, forcing Eilis to return to Ireland and face the choice of where she wants to put down her roots. During this scene I became aware that all around me the snuffling which I had mistaken for colds had increased. It was suddenly like being in a pit of tears, a cry-in; most people had given up and were sobbing away. I began to wish I hadn’t picked the seat only a few rows from the front, as I was swallowed up in Eilis’s face and the overwhelming poignancy of the scene.

Without giving away any spoilers, Eilis eventually comes to realize that there are no right choices, and in the more optimistic view of it, no wrong ones either. This is a movie about the heart and what it wants. The impulses that the heart feels aren’t rational, and they don’t offer guarantees. But they do give life its movement and color – a forward-going motion clearing out all that’s static and dead. Eilis makes choices that are impulsive, but never emotionally shallow. With her sincerity and her ability to go for it, you get the feeling that she will probably be alright no matter what the future holds.

Brooklyn may not be the most thrilling and fast-paced movie ever made (it’s no Mad Max). But it’s a big movie, a heartfelt movie and a watershed too – it’s been one of Ireland’s most successful films at the box-office, starring an Irish actress who was nominated for the most visible award in the whole film industry. Most importantly it points to the accumulating recognition of the Irish film scene, with attention on movies like Room (director Lenny Abrahamson was nominated for Best Director), the success of Ronan and her co-star, the ubiquitous Domhnall Gleeson, and of course an Irish Oscar win for Best Short Film, Stutterer.

Although dealing with familiar themes of emigration, family and tradition, Brooklyn is an understated and well-made movie. And sometimes any step towards the future is a good one, especially when you’re an Irish film-maker who needs to put distance between yourself and Far and Away.