Leaf season had already peaked and the famous green mountains had faded to a burnished gold. The vibrant, shocking colors of autumn had given way to the quiet beauty that would melt all too soon into desolation.

In some ways, this is the perfect time to visit Vermont. No longer overrun with tourists, the small towns are quiet, sleepy with the first snap of winter cold. Bennington, a charming little college town in southern Vermont, was no exception.

My trip to Bennington was inspired by the frequently-forgotten author Shirley Jackson. From the 1940s to the 1960s, Jackson was one of the most widely-read authors in America, with her stories appearing everywhere from Good Housekeeping to The New Yorker. She lived much of her adult life near Bennington College, where her husband taught literature to his adoring female students. Many of Jackson’s creepiest stories take inspiration from the rural Vermont landscape and the small communities that populate the mountains and valleys. In walking where Jackson once walked, standing where she once stood, I hoped to get a more comprehensive picture of what inspired such visions of terror as “The Lottery” and “The Haunting of Hill House.”

However, the first thing I noticed upon entering Bennington is just how pretty it all is. Wandering through Bennington, one gets the sense that this is a real community, a true American small town. The streets are populated with little coffee shops and used bookstores. In the crisp fall air, the town’s residents were bundled against the cold, wrapped in scarves and fleece as they hurried about with errands and the other minutia of day-to-day existence. Sometime in the early afternoon, though under the ominous sky it felt far later, I stopped at a gas station to ask for directions to Bennington College. The teenager behind the counter wasn’t sure, but one of the local ladies waiting for her coffee wasn’t nearly so shy. As soon as she found out that I was writing about her town, she began to fill my ears with the pleasant chatter of recommendations, histories, and of course, driving directions.

Though the day started out nice, clouds began to crowd the sky as the afternoon went on, casting Bennington into a dark and moody shadow. The quaint New England churches and old-fashioned colonial houses seemed almost sinister in this light, spread out against a background of purple and gray sky.

The small-town feel only lasted so long. Driving out of downtown Bennington, toward the school, monument, and museum (which are all located on the outskirts of town), I began to feel as though I was heading into another century. It’s not just because Vermont is quaint or charming or even kitschy, there is something else about the land itself that feels out-of-time. Having lost their green coverings, the mountains seemed vaguely eerie like something out of a black-and-white horror film. As I drove away from the town, I could feel myself leaning into a peculiar sense, as though I could call forth some supernatural, Jackson-esque horror if I only tried hard enough.

I soon learned that I wasn’t alone in this feeling. As I approached the giant monument on the northern part of town, my companion started voicing his opinion that this was “the creepiest monument [he’d] ever seen.” Indeed, the large stone structure, rising 300 feet above the town, cast an imposing shadow on everything in its path, out of place among the cheery yellow leaves and refurbished barns.

Perhaps this is because of the weather, but it was not difficult to imagine any one of Jackson’s heroines, to use the term loosely, walking the streets of historic Bennington. As I stopped to watch a wedding party file out of a large white church, observing the joyous occasion from a respectable distance, I was put in mind of 18 year-old Mary Katherine Blackwell, Jackson’s 18 year-old narrator of “We Have Always Lived In The Castle.”  Mary Katherine, more regularly referred to as Merricat, was always my favorite of Jackson’s characters. Despite her official status as an adult, Merricat is oddly child-like, infantile in a way that is more unsettling than charming. Perhaps I identified with this murderous woman-girl simply because of her name, which is an inversion of my own, but I think there is more to it.

To borrow from horror-movie jargon, Merricat is something of a Last Girl. While all else falls into chaos around her, Merricat is somehow left standing long enough to tell the tale. Just as Bennington’s small-town charm thinly covers a much more complex reality, Merricat’s beautiful old house and family wealth hides her inner turmoil from the rest of the world. She is forever excluded, both from her family and her community. However, viewing things from the outside can often lead to greater insights, a fact that Jackson knew all too well.

According to her biographer, Judy Oppenheimer, Jackson spent much of her own life as an outsider. Oppenheimer is of the opinion that part of this was due to Shirley’s continual struggle with her weight; she would swing throughout her life from one end of the spectrum to another. As a child, her mother would frequently comment on her unruly daughter’s weight, perhaps with the hopes that Shirley would eventually be shamed into dieting. But even when she was in college, thin as a whip and being pursued by multiple suitors, Shirley was not entirely happy. She remained somewhat on the fringes of Syracuse social life, popular with some though known by many.

Shirley’s reputation for strangeness followed her through college and well into adulthood. As she began to publish more and more of her fantastical, dark, and often violent stories, she began to play on her status as something of a witch. In interviews, Shirley would often talk about her experiences with magic. It is still unclear whether she believed her claims, but they worked to fuel interest in her spooky novels. However, Shirley wasn’t just spooking her readers for fun. No, Jackson truly believed that she was tapping into something essential, something human. She explained:

I have had for so many years a consuming interest in magic and the supernatural. I think this is because I find there so convenient a shorthand statement of the possibilities of human adjustment to what seems to be at best an inhuman world.

Jackson’s sense that she was living in an inhuman world was only heightened by the events of World War II. Her most famous story, “The Lottery,” does not include any magic, yet it is impossible to read this piece without recognizing that some familiar cruelty, some dark force at work within the villagers.

Furthermore, it is clear that Jackson drew some of her inspiration for the quaint, bucolic village depicted in “The Lottery” from her own life in Bennington. Oppenheimer even suggests that the stoning at the end of the tale may be allegorical for the anti-Semitism Jackson felt in Bennington. While she was not Jewish, her husband, Stanley Hymen, was. One of Jackson’s close friends once explained that the possibility of anti-Semitism in their small community bothered her enormously. Even in the picturesque small town, Jackson felt the dark painful undercurrents of prejudice.

But prejudice, like all other human evils, can be found anywhere. Just because Jackson felt it more strongly in the Vermont town does not mean that Bennington is at all unique. Yet Jackson felt that there was something special about this place, something that made it infinitely appealing to the writer in her but appalling to the humanist.

Leaving Bennington, there was only one thing I knew for certain: this place had inspired Jackson, shaped her views and molded her writing. Without the hills of rural Vermont, Merricat may never have come into being, and “The Lottery” would have remained unwritten. 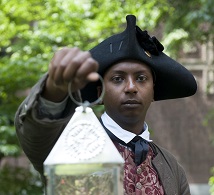 I Am Providence: The City that Made H.P. Lovecraft