In an old house in Paris
that was covered with vines
lived twelve little girls in two straight lines.

Austrian-born Madeline creator Ludwig Bemelmans penned these words each and every time he begun one of his children’s books about this charming, yet tiny only in stature, redheaded French girl.  The character of Madeline, named after Bemelmans’ wife, carried on in a sweet and innocent in demeanor; however, the author maintained a much darker past.  At the age of sixteen, young Ludwig apprenticed in a relative’s restaurant, and had an unfortunate dispute with a waiter. Bemelmans’ response was unmitigated, since he took out a gun and shot the waiter.  Thus the author’s parents shipped him to America, where he joined the U.S. Army and became a naturalized American citizen. Throughout the 1920’s and 1930’s, he established himself as a restauranteur and an illustrator/author. Similar to tales of numerous writers, Bemelmans suffered rejection by publishers and only achieved moderate success until his Madeline series of five books.  In fact, he won the prestigious Caldecott Award in 1954 for Madeline’s Rescue. After his death in 1962, the grandiose triumph of the Madeline series continued for decades, even with a cartoon series, narrated by the legendary Christopher Plummer.  On television, little Madeline can still be seen every Saturday, while in libraries and bookstores, she is constantly checked-out or bought.

The beauty of Madeline comes from two distinct areas: the culture of Europe and the illustrations.  The former derives from the rhyme-scheme which encompasses all of the books, allowing the reader to imagine a perhaps British narrator.  Yet the latter is what leaves the most memorable impressions on the audience–both younger and elder. Bemelmans composes his illustrations of smeared watercolors, and almost a childlike sense of painting.  For instance, if one inspects an illustration closely, s/he will notice that a black hair ribbon or a bow tie is not properly colored in–Bemelmans distinctly colors “outside of the lines” in some of the smallest details.  Little girls with curly hair simply have quickly-doodled ringlets, while the leaves on the trees droop like the wings of birds.  It seems as though Bemelmans consciously makes these decisions of where to input simplicity.  On the other hand, his exquisite and elaborate illustrations of Paris’ landscape provide the reader with a feeling of place–even if a child has never visited Paris, s/he will comprehend that ornate buildings, beautiful gardens and the Eiffel Tower are features of this unknown place.  His illustrations are so memorable and vivid, that even the televised cartoon series took on the same appearance as the books.  In one picture, the looming Notre Dame, home of the famed Hunchback, stands majestically, even in the rain, as Miss Clavel and the girls grasp their teeny, black umbrellas from monstrous rain drops.  In the illustration of the Eiffel Tower proudly erected, Bemelmans’ representation of the scene, is closely related to Vincent van Gogh’s “The Starry Night.”  The Tower maintains a black frame with navy blue hues for the sky thus swathing the surrounding apartment buildings with the same bluish tints–giving Paris a ethereal, yet eerie presence.  Also in this scene an ambulance is rushing past, particularly representative of Bemelmans’ illustrations–mixing the breathtaking with everyday Parisian life.

It is well-known that the author was an extensive traveler.  He bounced around in both the United States and Europe, for his restaurant business, but he also spent time in California working for the movie industry.  He was a true literary traveler since he wrote and illustrated throughout his travels, gathering information for describing and illustrating such cities as Paris and London. Besides his children’s books, his other famous work of art is his mural “Central Park” located inside the Carlyle Hotel’s Bemelmans Bar on the Upper East Side of Manhattan at East 76th Street and Madison Avenue.  The Carlyle Hotel, an elegant establishment with a long-standing history of famous movie stars, businessmen and socialites, commissioned Bemelmans to paint the mural.  However, the author took his commission in a most unusual way.  Foregoing financial compensation, he swopped his services for a year and a half’s stay at the Carlyle Hotel.  Bemelmans’ memory has long survived over the years, since every Saturday and Sunday there is a Madeline tea party and lunch at the bar named in the author’s honor.  In the dimly-lit bar, little girls arrive dolled up in flowery dresses and sing along to children’s songs, led by a female musician at the piano, which is adorned with a stuffed Madeline and her books.  Of course, they are accompanied by their parents who have the option of either sipping tea or drinking a Bemelmans Barter–an alcoholic cocktail which consists of Cognac, Caracao, pineapple, Angostura Bitters and nutmeg.  Also, for children and parents alike, there are cheeses in the shape of the minute Madeline.

Ludwig Bemelmans completely turned his life around–from shooting a man at the age of sixteen  to becoming an idolized children’s author. He faced rejection and struggle, yet by the latter part of his life, Bemelmans earned a handsome living for his travel and humor writing, books, illustrations, paintings and especially the Madeline series. He captures the spirit of Paris in the most whimsical and uncanny way–following around a little red-haired girl and her friends who march in “two straight lines.” 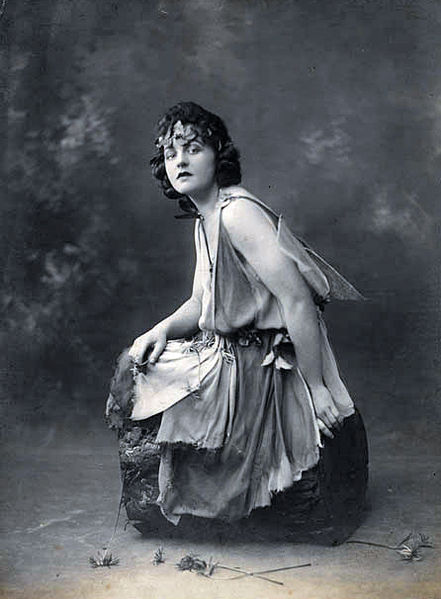 One Nanny, Hold the Spoonful of Sugar: The REAL Mary Poppins and Her Creator, P.L. Travers