For each reader of Frost there is a different poet and poem. We can make our own meaning of his work. To celebrate that work we left Boston, MA on a two day road trip through New Hampshire and Vermont to see how the states where the poet lived and wrote, remember him.

Our journey begins on I-93 heading northwest of Boston. I left on a Saturday Morning, with my wife by my side, a New England road map, camera, binoculars, bird guide (in case of oven birds), and some sandwiches and water in the trunk. The first stop was The Robert Frost Farm in Derry, NH about an hour from Boston. This was where the poet wrote many of the poems for his first book of poetry, A Boys Will published in England in 1913, including poems such as “Into My Own,” and “The Trial by Existence.” Here Frost claimed to have written material for his first three books.

We arrived before the house opened and took a stroll around the property. The white farmhouse and barn sit on a two lane highway that did not see much traffic during our visit. We went out past the house into the pasture in back. The grass was not cut and we stayed on a trail that runs along a stone wall beside the pasture. The air was filled with the smell of sunshine and flowers. This stone wall was the inspiration for the poem “Mending Wall” in North of Boston. It was here that Frost used to repair this old wall, with his neighbor Napoleon Guay, who liked to say “Good fences make good neighbors.” I looked at the wall the way it was now. Some of the stones were down, but the wall still held it shape. I wondered if someone was continuing to mend it.

At the edge of the pasture there are woods that mark Hyla Brook and there is a nature trail that takes you along side it. The woods were cool and quiet except for the slow hushing reminder of water. The dark water winds through the woods back into the other side of the pasture towards the house.

We came up to the barn as the tour guide was arriving and she invited us to come in and have a seat and watch a film before taking the tour. The barn was rustic and decorated with pictures of Frost and his family along with quotes and excerpts of his work. The film gives a good feeling for how Frost got on in Derry, with dramatic representations of his poetry.

The house itself is simple. Attempts have been made to recreate the interior back to how it looked at the time Frost lived there. Frost’s eldest daughter Lesley Frost Ballantine helped in the restoration. The rooms are decorated in a similar manner to how they were when the Frosts lived there. The kitchen wallpaper is a reproduction of the pattern they had and the dishes in the dining room are original. The tour is not long but takes you through the house and explains how the Frost family lived at Derry. In the kitchen it was easy to picture Frost up late writing at the table after his family had gone to bed.

The Frost family lived here from 1900-1911. The farm was an important place for Frost and would grow to become more so in his mind as time passed. His intention was to make a go at poultry farming, and write poems on the side in hopes to fulfill his ambition of being a poet.

Frost received the money to buy the farm from his grandfather William Prescott Frost. He did not get along well with his grandfather who made certain arrangements concerning the disposition of the farm. One was that Frost’s friend from high school Carl Burell, an amateur naturalist, come live at the farm and help him run the farming side of things. This along with the fact that ownership of the farm was dependent upon Frost’s ability to stick with it. Ownership would pass into the poet’s hands only after he had lived at the farm for ten years.

These arrangements had been made without Frost’s knowledge and he resented his grandfather for it. His friendship with Burrell suffered and eventually Burrell left the farm.

Frost believed that his grandfather saw him as a failure. It was hard for him to stick with the jobs he had growing up. He had dropped out of two prestigious colleges, Dartmouth and Harvard, after being valedictorian of his high school class.

Despite the difficulties in the beginning, the family adjusted to life at Derry. They enjoyed excursions into nature hunting for flowers such as orchids where their father would teach them about the natural world.

Most importantly for Frost it was here he overcame problems he had faced in his earlier years such as depression and unfulfilled attempts at suicide. It was at Derry that Frost began to write seriously. His intention all along had been to sell the farm after the ten years were up. When selling time came it was tinged with regret. The farm held both good and bad associations for him and he would return there for inspiration both in a literal and figurative sense. Frost did return to the farm when he was older and tried to explain who he was but was unrecognized and turned away by the current owner. He wrote this Poem to commemorate the sale of his farm.

“On the Sale of My Farm”

Well-away and be it so,

To the Stranger Let them go.

Even Cheerfully I yield

Yea and wish him all the gain

I required of them in vain.

Yea, and I can yield him house,

Barn, and shed, with rat and mouse

To dispute possession of.

These I can unlearn to love.

Since I cannot help it? Good!

Only be it understood,

It shall be no trespassing

If I come again some spring

In the grey disguise of years, 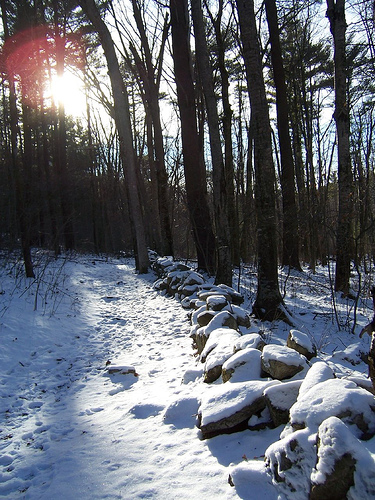