by Jessica A. Beck

When I first read Cornelia Funke’s The Thief Lord, I couldn’t have been more than 10 years old. I was a girl infatuated with the idea of running off. I could get lost anywhere: the grocery store, a library, even my own neighborhood. As I wandered, so did my imagination. Eager to devour whatever was in front of me, I dove into the novel. I quickly slipped into the pages, and soon I too was one of the orphans in Funke’s story, slinking about the back alleys of Venice.

I was unsure what the Venice of reality shared with the Venice of The Thief Lord. In the book, Venice had always been calling to the Boniface brothers. The boy’s heads were filled with fairy tales their mother told them of secret passages, riches, illusion, and mystery. After her death, Bo and Prosper Boniface were left orphaned and feared they would be separated. They chose to take fate into their own hands by sneaking away to Venice, chasing the whispers and magic of their mother’s voice. Throughout their adventure, Bo and Prosper managed to stay a step ahead of a private eye named Victor Getz, hired by their aunt and uncle in a half-hearted attempt to find them. They were quickly acquainted with the labyrinth of passageways making up their new home and became experts of elusion. Bo and Prosper took up residence in Star Palace, an abandoned theater occupied by other orphans and their masked leader, The Thief Lord. He was a peculiar boy who, not unlike the city in which he resided, remained always secretive, quiet, and magnetic. Perhaps this was because the Thief Lord was himself an illusion, a rich runaway who crept back into his own home under the cover of night in order to provide for his loyal band of orphans.

It’s ten years later and the story still stays with me. In late August of this year, I woke after a train ride to find myself in Venice. This seemed to be the way of things for my entire stay; walking the winding pathways, I would suddenly appear in a place without quite being able to recall how I had arrived. Throughout my days in Venice, the hours toyed with me, passing slowly then all at once. How fitting it is, then, that The Thief Lord’s main conflict revolves around a manipulation of time, as it contains a mythical carousel that possesses a power to turn the old young and the young old, depending on the way it spins. 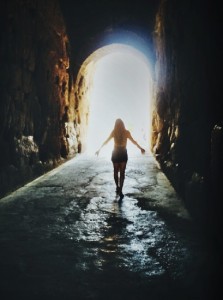 I dragged my backpack out of the train and left the station. It was a warm, gray day. The clouds hung low and lazy just above my head. The ocean, despite the canal’s best efforts to contain it, was everywhere. The smell hung in the air, even, as I would soon find, inside of my hotel room. I stepped out onto a wooden dock and climbed aboard one of the many boat taxis. The driver’s warm eyes met mine. His weathered skin was glowing with a tan and he didn’t mind when I asked him to take me the long way around.

The canals are the veins of this city, pulsing along, slowly pushing daily life from one place to the other. We began to glide down one of the narrow waterways as I watched green moss climb out of the sea and up the walls of stranger’s homes. The slat air ate away at paint and the faces of statues, leaving me with a feeling that unseen forces had been at work here. It was impossible not to think of my old friends Bo, Prosper, and the other orphans in Star Palace. I could see them now, lounging about behind moth eaten curtains, sorting out their stolen treasures among the crumbling stone.

In a word Venice is – enchanting. It will make you lost. There are echoes of plates and cups clanking, the constant lapping of waves up against boat bottoms. Seagulls fly in and call to their friends while rain begins to drip from above. At the whim of the tides the ancient city rises and falls as if it’s breathing. Old palaces, like gray skeletons with their toes in the water, lean whichever way they please. They have grown so elegantly tired. Narrow passages wind their way in circles and dead ends. The locals and their ghosts chuckle from around corners. Time here is a game, exposing the city’s secrets before they are slowly swallowed up again.

I kept looking over my shoulder, always catching something just out of the corner of my eye. It could have been The Thief Lord himself disappearing down a footpath or Victor Getz watching from a bridge as I passed beneath him. On my first evening in Venice, while the end of summer sun began its dip to meet the horizon, the city had already convinced me to suspend my disbelief. There is such a thing as magic. It lives here.

The Year of Shakespeare: How to Celebrate the Bard in 2016

The High Mountains of Portugal: A Thoughtful but Underwhelming Study of Grief