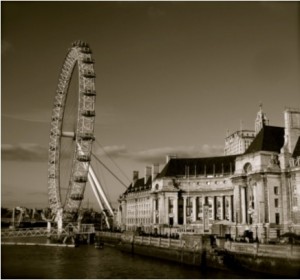 Through invention, invasion, immigration and preservation, the city of London has sustained itself since its founding by the Romans, when it was first dubbed Londinium. It remains a leading global city centuries later, upholding itself upon the River Thames. This is a place where over 300 languages are spoken within its boundaries and people of all different cultural backgrounds call it home. Thousands flock every year to take a ride on the London Eye, walk through Trafalgar Square, take pictures of Buckingham palace, and shop on Portobello Road.

But aside from the main attractions, the city itself has so much more to offer. London is a character that breathes so vibrant a breath that life seems to feed both off and on itself in order to perpetuate the vital activity that keeps it in motion. If you peel back the layers of contemporary fashion and posh attitudes you will find history’s residue still embedded within. Mixed with this historical relevance and the city’s modern day characters, London should definitely be on your list of places to visit.

Literature can reveal so much about a particular setting, revealing to you firsthand the intricacies of London’s culture and the many characters that make it up. Here is a list of contemporary British literature that enables you to get a glimpse of the raw nature that occurs in this colorful place.

Wise Children is a fictitious story that recaps the lives of twin sisters Dora and Nora Chance along with their outrageous family. Starting with birth, Dora and Nora were said to be destined performers – as they quoted themselves having come out of the womb doing back flips and cartwheels. In this novel Carter employs a great deal of magic realism and carnivalesque elements. The characters are comical and desperate, which in turn transmits itself into great amusement.  At some points you may find yourself laughing, however more often than not you’ll find yourself questioning the validity of each character’s ridiculous and perplexed story, including that of Dora Chance as she narrates everything so brilliantly. This book explores the more theatrical side of London and its humor, revealing to the reader the hysterics that occur both on-stage and off. Buy it on Amazon.

This novel reflects the strong relationship between two veterans, Bangladeshi Samad Iqbal and Englishman Archie Jones, who befriend each other during their service in WWII. Now living in London with their families, their struggles consist of raising teenage children, keeping their wives happy, and learning that things will not always go as planned.

Zadie Smith toys with the concept of chance vs. fate in this novel. For example, Archie Jones resorts to flipping a coin so that he doesn’t have to make a decision for himself. Smith also bemuses the reader with the actions of second-generation children, implying how important/unimportant roots are and what purposes they may serve to alternately hold us in the past and provide the advantage to getting ahead. A great deal of the novel also covers the hardships of preserving one’s culture while trying to assimilate into a new one as Samad Iqbal tries to force his two twin sons to live by traditional Islamic beliefs. Because London seems to be a melting pot for surrounding cultures, Zadie Smith addresses what it’s like when one’s moral character clashes with foreign influences. Buy it on Amazon.

If you enjoy a more modern style of writing, try Amanda Craig’s Hearts & Minds. The story is relayed through multiple perspectives, as each chapter flips back and forth between several characters whose lives intersect in fleeting moments. These characters’ stories intersect, although for the most part only the reader is aware of this. The setting opens with a body being found in Hampstead Heath located on the outskirts of London, and unfolds with the stories of those who are affected. The characters meandering through these narratives vary — an immigration lawyer, a teacher, minicab driver, starting journalist and a young Russian immigrant sold into sexual slavery.  With stories both compelling and raw, readers will find themselves not wanting to put the book down as each chapter ends abruptly and the next narrative begins.

Amanda Craig does an amazing job portraying London’s dueling natures — as a place for new beginnings, as well as a place to hide amongst the crowd. Either way it is a place to find refuge. Her characters are indicative of the various denizens that make up the city, and the book itself centers on the reasons why they call London their home. Craig tackles such issues as immigration and upper class snobbery, struggle and misfortune, luck and resolution and conveys all of this in a captivating and jarring manner. Buy it on Amazon.

An amazing read, this book captures the modern day anxieties of an ever-growing city and explores one’s personal satisfaction in a post-modern world. Ian McEwan presents London and it’s people operating like the innards of a clock – consistent and comfortable in motion, set to operate appropriately. It takes place post 9/11 and details how the population of a large city carries on by living through routine. The protagonist, a neurosurgeon named Henry Perowne, finds comfort in this order. He is a strategic and methodical character, as his occupation requires him to be. Taking place over the course of a single Saturday from which the novel takes its name, the day is interrupted by a chance encounter with a mentally unstable young man and circumstances extend beyond Perowne’s control. These forces threaten Perowne and his family as they are challenged with the task of restoring order to their previously contented lifestyles. Ultimately, the reader becomes a spectator, watching as the events unfold and end in a climactic twist of fate. Buy it on Amazon.

This dark comedy follows the stories of four characters, whose interconnected lives provide the basis for the novel. Samson Young is an American writer who ventures to London in an attempt to break his writer’s block. In the introduction, Young admits that the story he is about to write is not his own, it is already written for him by another character in this book, Nicola Six.  Nicola is aware that she will be murdered just minutes after midnight on her 35th birthday. Already playing the role of femme fatale, she goes in search of her murderer. Young decides to document her fate and carefully tries to predict who will commit the murder – whether it will be Keith Talent, the dart-playing cheat, or Guy Clinch, the upper-class banker, both of whom he considers his friends in this new city.

This story gives a glimpse into the many characters that inhabit the city of London. It explores the pubs, the landscape, and the home-life. In what is considered to be his best novel, Amis gives us a murder mystery that begins with comedy and ends in a foreshadowed and climactic crime. Buy it on Amazon.

Night Haunts: A Journey Through the London Night – Sukhdev Sandhu (2006)

Do you ever stand by your window at night and observe a deserted neighborhood? Long after the streetlights have turned on, signaling to the millions that it is time to dream. No more shoppers, schoolchildren, or businessmen – the sidewalks are now only occupied by insomniacs.  This book is all about the night, peeling back the layer of gravel to reveal the dark underbelly of a city.

Night workers keep a city nestled on its infrastructure, safe and in order. From the bird’s eye view of a helicopter, the city looks quiet and tucked in, settled in rows of black houses that line the horizon. From the windshield of a car, strangers are potential fares and flock like flies to a lit up sign that reads Minicab. These are the stories of the few who uphold the streets of London.

Night Haunts is a series of vignettes detailing individual stories of those who view London during its quietest hours. The narratives include those of underground workers, night cleaners, police officers, graffiti artists, cab drivers, and more. Each story offers a glimpse of London’s nocturnal side, as well as the places where the average citizen will never venture on their daily routine. Read this and gain a greater appreciate for the less visible parts of the city as well as the people that maintain its great landscape. Buy it on Amazon.

A Night in the Library: Gladstone’s Library, Wales