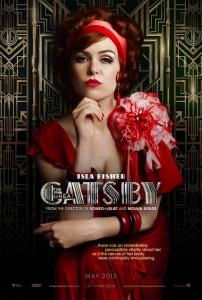 The Great Gatsby is an American classic that captures the illusive nature of the American dream during the Roaring Twenties.  It’s no doubt that a film in this day and age would interpret the story with a modern twist, while preserving the roles that Fitzgerald assigned to each of his characters.

As the personality of James Gatz unfolds, one realizes why Leonardo DiCaprio was chosen to play the part.  He’s always so invested in his roles, and this film is no exception. He does a remarkable job radiating the charm and confidence of a modern day dandy, as well as conveying the determination and craze behind someone driven by obsession –you’ll undoubtedly lose yourself in some of his scenes.

Expect to hear a killer soundtrack with such artists as Jay-Z, Fergie, Andre 3000, and Beyonce. The contemporary approach of the music makes the story that much more accessible to the youth, because it fuses traditional jazz with modern day hip-hop. One of my personal favorites, Fergie’s “A Little Party Never Killed Nobody” sounds authentic because it contains traces of 20s-inspired instrumentals. However, the upbeat drum and bass will have you dancing in the theater. The music tends to accentuate the racy, violent, extravagant nature portrayed in the scenes and adds to the overall theatrics.

For those who have yet to watch the newly released 2013 spin on this beloved novel, be aware of who the director is. Baz Luhrmann, famous for directing such hits as Romeo + Juliet and Moulin Rouge, certainly utilizes his imagination to deliver something incredibly unique to his audiences. Luhrmann’s theatrical approach is indeed ambitious; his rendition relies on over-the-top decadence, A-list stars, and visually stunning effects to appeal to the fans. Although the movie fell short at times, it undoubtedly exceeded my own expectations. My advice would be to go into it with an open mind, taking with you an understanding that this film is the director’s creation and not simply a reproduction.