You may splinter us,
you may break us
We’ll reach the horizon,
where the sun rises!

– from Broken Pines by Rainis

It is November in Riga and the cold and greyness that surrounds us is oppressive.  The transition from fall to winter is bleak here.  Not only is the light leaving us earlier in the evening, but the sun is also beginning to wake up later and later each morning.  Many visitors plan to come for Jāņi, the Summer Solstice, in order to experience the midnight sun, but Latvia also has a lot to offer in the colder months.  In addition to its beautiful parks and charming city streets, Riga has a lot to offer indoors, as well. From museums to shopping to the Latvian National Opera, the city is inspired and full of energy.

So while it may be grey outside, at the National Library of Latvia, also known as the Castle of Light, the world feels bright.  Inspired by the play Glass Mountain by poet Rainis and Castle of Light by poet Auseklis, this Library is a building to experience from the inside out.  Outside, the lights from Old Riga reflect off of the Daugava River and up the glass panes that make up the building, making the city and the books come alive.  When standing in front, you are joined by an oversized statue of poet Rainis, barefoot, and currently sporting a scarf for the coming winter.  I am both intrigued by the man’s stoic face and amused by his bare feet.  To me, this statue nods to the music and poetry that are central to Latvia’s culture and also to its people’s connection to nature. 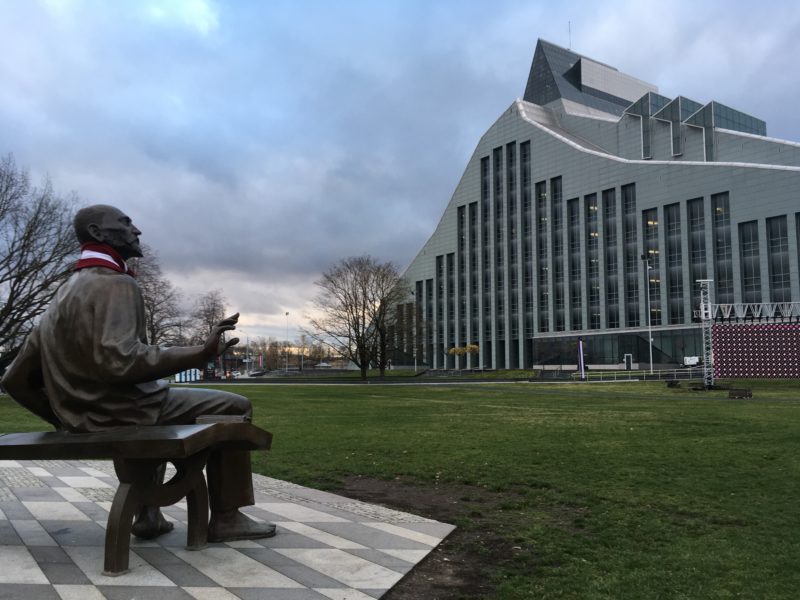 Back inside, that feeling of grandness overwhelms.  The open floor plan allows one to experience the breadth of the building and the scope of its contents, simply by glancing upwards into the exposed floors and glass elevator. According to Eumiesaward.com, the building is made up of 8 levels and boasts space to hold “up to 8 million units of printed materials with 350,000 books provided for free access [that] its size of 40,455 square meters allows [while] simultaneously serving 1,000 visitors.”  In addition to the collections of books, the library holds a restaurant, bookshop, exhibition halls, a book museum and a hall that holds 462 seats. 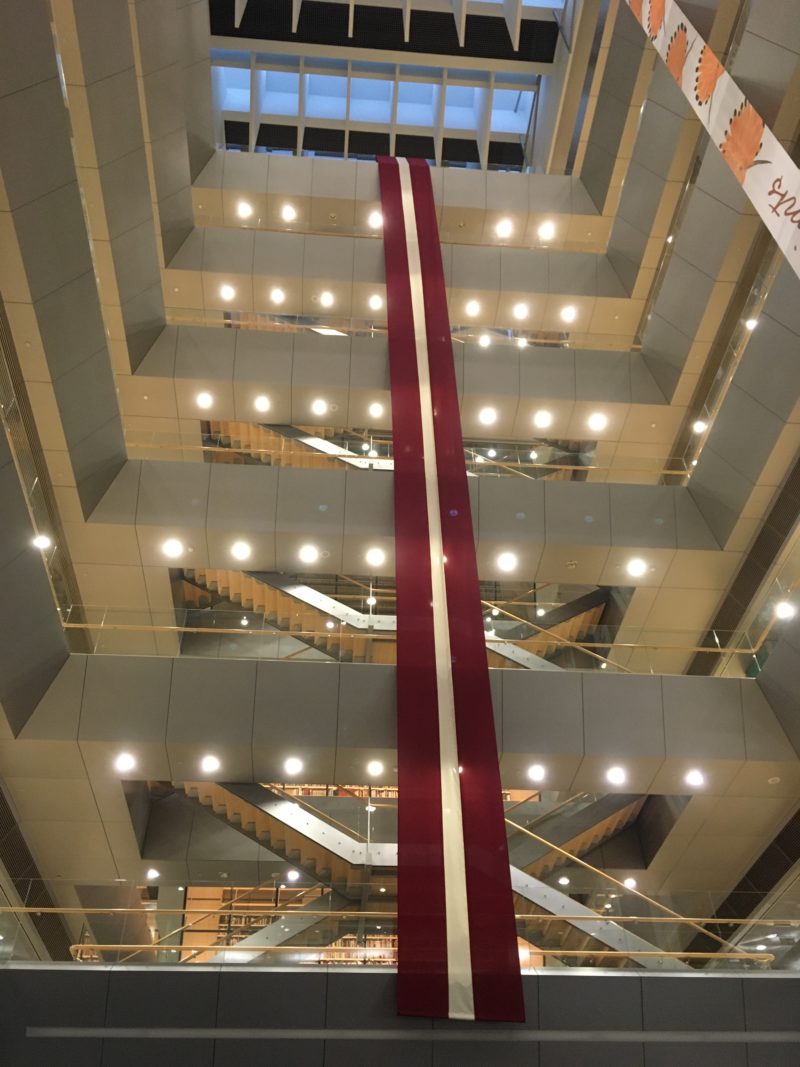 This building was a dream come true for renowned architect Gunnar Birkets, a Latvian-born expat, who lived in the US until he passed away in 2017 at the age of 92.  The first sketches were completed back in 1989, but it wasn’t until 2008 that work began, with the final product being unveiled in 2014.  Birkets won many awards, including the Arnold W. Brunner Memorial Prize in Architecture from the American Institute of Arts and Letters in 1981.  He left a long list of buildings to his credit, including the Federal Reserve Bank of Minneapolis (1980), the American Embassy at Caracas (1992) and served as chief designer on the Dhahran Air Terminal in eastern Saudi Arabia.  He lived in Michigan for many years of his adult life, but most recently resided in Needham, MA, where he died.

But back on our adventure…traveling to the library and shepherding the kids took longer than expected and so after dropping off our jackets and belongings at the coat check, our first trip is to the restaurant.  Down a hallway on the first floor, the open floor plan and bright lighting, make it a comfortable and easy way to sample Latvian fare. We enjoy many local foods, cafeteria style, including beet salad, pan-fried potatoes, and a variety of soups, including borscht and solyanka.

After viewing the exhibits on the main floor, our next stop is to the children’s room.  To travel up to the seventh floor, my husband’s cousin signs up for a library card and we sign in as visitors. The room has many reading nooks to offer small visitors, as well as a small treehouse-like building with replicas of thin trees alongside, reminiscent of the birch trees pervasive in the Latvian forest, but painted red to create a whimsical feel.  I can see that this building is a place of scholarship because we are joined with individuals who appear to be doing scholarly research.  One woman has six versions of Alice in Wonderland in various languages and formats spread out on a small table.  There are coloring materials available and my vivacious toddler is met with smiles and giggles from the staff.  By this time, the sun has set, and the view of the city from the tall glass panes is magical in its own way. 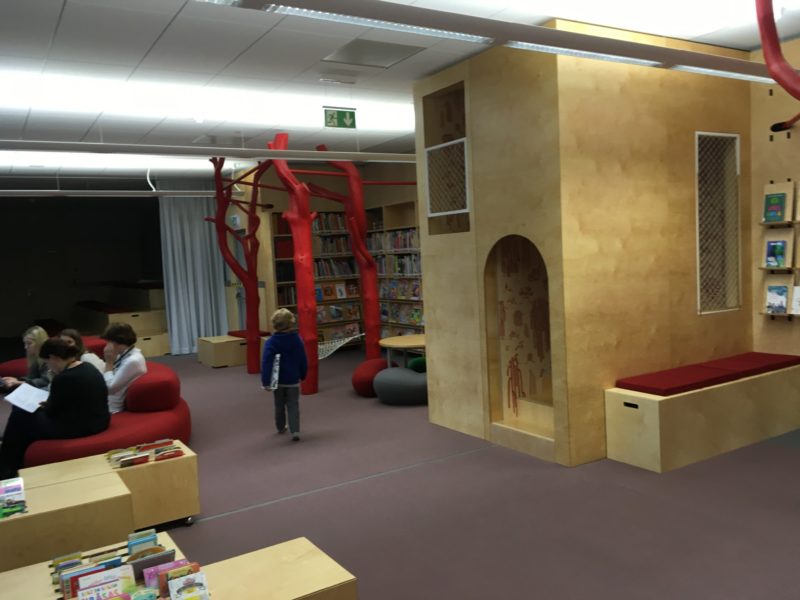 After many hours inside, we travel out into the cold once again.  The wind whips a chill down my spine and I pull my jacket in tighter, I place a blanket on my children, now both asleep in their strollers, and prepare for the half hour walk back to our AirBnB. I am invigorated by the cold and inspired by the celebration of the written word.  I recall my husband telling me that children in Latvia recite poems in front of the Christmas tree before receiving presents and I look back at Rainis.  He looks all-knowing, as if he saw this coming.  The people of Latvia are reclaiming their identity as lovers of literature, as a people.  The words from Rainis’ poem “Broken Pines” seem to ring through the halls and bounce off the reflected glass. “You may splinter us, you may /break us/ We’ll reach the horizon, where the/ sun rises!” It has only been a short time since Latvia won their independence from Soviet rule in 1991, but they seem to have made great strides toward reclaiming that history and the National Library of Latvia helps position that identity.  The revolution may have started with a whisper many years ago, but this country’s voice has gained strength and the world is starting to take note, and to visit.

Jaclyn Tilks is a writer, teacher and marketing professional in the Greater Boston area. Her poetry has appeared in Wilderness House Literary Review. She was the recipient of a scholarship to attend the Frost Place Conference on Poetry and was a representative poet at the Boston Intercollegiate Festival. You can follow her recent adventures at her blog www.familyfoodvalues.com and on Instagram @familyfoodvalues 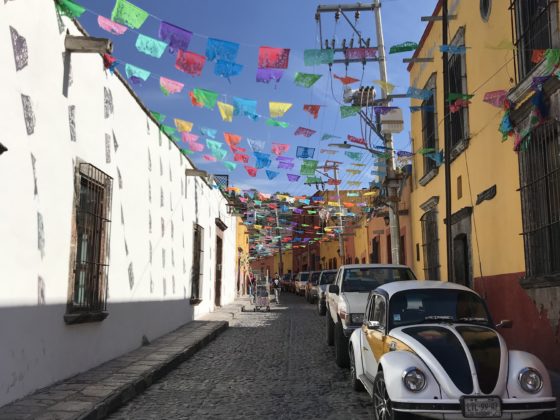 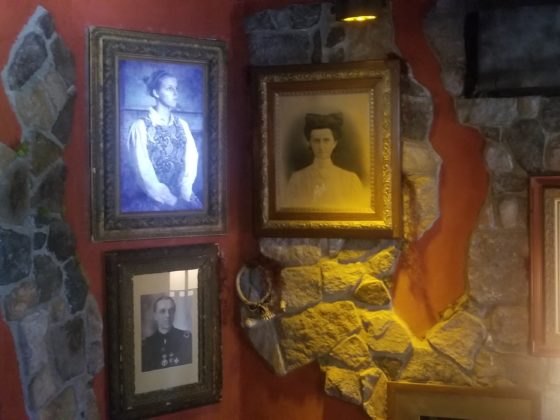