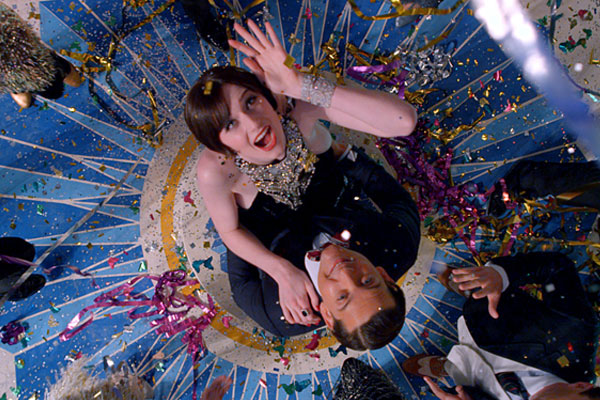 I didn’t see Baz Luhrmann’s film adaptation of The Great Gatsby until two weeks after it opened in theatres.  It wasn’t because of sold out tickets or a schedule so busy I just couldn’t find the time.  It was kind of like staring at a green light on a distant dock for years in anticipation of a fated event to take place at a time to be decided.  Like Gatsby, I was setting myself up for failure.  Could it ever be what I wanted it to be?  Or, like Daisy, would it fail to live up to the hype — not on its own merits, but instead because of my idealistic and admittedly unrealistic expectations?

Before I start this review, I hear all the defensive fans moaning. Cue whiny, sing-song tone: “What did you expect from Baz Luhrmann?”  Well, let me squash that right there: I knew what I was getting into. Moulin Rouge is one of my favorite films. In fact, I am listening to the Moulin Rouge soundtrack right now, as I type this.  I went in with my vision so clear T.J. Eckleburg would be proud.  The problem remains, Moulin Rouge was a Belle Epoque-set spectacle – completely decadent, gratuitous and absolutely amazing. But it was an original story with no precedent set; it was not based on one of the most beloved novels of all time.  I could buy Ewan MacGregor and Nicole Kidman singing a romantic mash-up of Kiss, The Beatles, Phil Collins, David Bowie and U2, because there was no well-worn image in my mind, planted years ago and colored by so many readings and experiences.

Yet, it is not all bad.  I do love what Luhrmann can do visually and musically — and Jazz Age New York under Luhrmann’s tutelage could be nothing short of phenomenal.  The Prohibition-era speakeasies, the opulent parties, even the destitute slums are brought to life in ways that stimulate all of the senses (and I didn’t even see it in 3D).  Certain settings are done so well, in fact, that I think if it had been a series of vignettes it would have been perfect.

The early scene in Myrtle’s NYC apartment is a gorgeous sensory overload.  The debauchery inside contrasted with the myriad of life outside the window is so unique and emotive, both visually and audibly stunning – yet, this is not for its impact on the novel, just a startling example of what Luhrmann can accomplish with the right tools.

Unfortunately, these well-done, visually appealing vignettes are strung together by some over-the-top performances that, at times, border on the nonsensical.  Like I said, I get that Luhrmann is an over-the-top kind of guy. And, as a genuine fan of much of his work, I have the right to say:  Being known for over-the-top antics does not necessarily mean they will be successful every time. You can’t throw shiny objects at an audience and expect us to overlook everything else.  In a culture where everything has to be franchised and packaged to sell, the riskier move would have been to make a subtle, nuanced Gatsby.  But hey, that’s just my opinion.  Sign me up for the Jay Gatsby action figure and let me know who’s signed on for the sequel.

Ultimately, one has to ask, aside from the opulent parties (the convenient product placement for Moet, the who’s who of hip hop-stacked soundtrack, and cool flapper couture by Prada), should the deeper emotional text of the novel and characters so full of sadness, cynicism, and nostalgic angst be represented in such over-the-top, exaggerated, and commercialized ways?

I am undecided, because there are moments throughout the film when I think Leonardo DiCaprio nails it, and then there are times when over-the-top spills into the messy gray area of caricature.  Sometimes this jarring transition occurs in the same scene.  One moment I am wrapped up in the sadness of his illusion, so perfectly captured by a look or subtle glance – and the next,  he dips towards manic, portraying Gatsby a little too cartoonish to do him justice.

The supporting cast of the film seems to steal the spotlight.  When I first heard that Isla Fisher was cast as Myrtle, I was simultaneously excited and nervous.  I always love Isla Fisher, but she seems to be a one-trick pony in the acting department, and I was worried about how well Gloria from Wedding Crashers would fit in at Wilson’s garage. Joel Edgerton was probably the biggest surprise for me, because he takes a racist, misogynistic and all around reprehensible character and, while he plays him as such, manages to make a small part of me feel a glimmer of sympathy for him at key moments, such as The Plaza hotel confrontation and Myrtle’s unfortunate demise.  Surely, this is because of Edgerton’s acting chops and not Tom’s character.

My largest problem with Luhrmann’s film is Nick Carraway.  As a disclaimer, let me say that I like Tobey Maguire, and he did the best he could with what he was given — it just wasn’t much.  Carraway is my favorite character in the novel (and one of my favorite literary characters, in general), so I hold him to some pretty Gatsby-esque standards.  Luhrmann’s Nick is wide-eyed and uncertain – meandering through Gatsby’s world in a sort of tentative haze.  What makes Nick so compelling to me as a character is his skeptical nature when viewed next to Gatsby’s hopeful romanticism. In both the film and novel, Nick plays the role of the observer, yet what is so compelling about Fitzgerald’s Nick, is that he is not as easily convinced as Luhrmann makes it seem.  Characters are often made by their interactions with each other (i.e. Gatsby and Nick), and I believe that a huge part of the reason why Nick is easily forgettable in Luhrmann’s film is the noticeable and unfortunate lack of his counterpoint, Jordan Baker.

Elizabeth Debicki seems to have stepped right from the pages of the novel in all Jordan’s “jaunty” and “insolent” glory — and she is drastically underutilized.  Nick and Jordan’s dynamic is what showcases Nick’s cynicism. In Jordan, for better or worse, he seems to meet his match. The “bad driver” exchange is one of my favorites in all of literature, and one I continually go back to in my own life (only partially because I am terrible behind the wheel).  Without Jordan to expose a different aspect of Nick’s personality, he ends up as a receptacle for Gatsby’s nostalgia and not much more.  (The best representation of Nick I have ever seen is in a made-for-television Gatsby with a young Paul Rudd in the Carraway role – playing him as the low-key, slightly sarcastic observer that I read him as in the novel.)

Ultimately, Fitzgerald’s book is one that does not lend itself easily to film.  It might have elaborate costumes and lavish parties, but the haunted emotions and the bittersweet nostalgia for the past are what make it so gorgeous, and they are missing in Luhrmann’s film – or perhaps they are there, but buried too deeply beneath sensory overload to be felt at all.

Stealing the spotlight is Lana del Rey’s haunting elegy “Young and Beautiful,” which plays in various renditions throughout the film. Del Rey’s song perfectly encapsulates the novel, and it is the thing I will most carry with me from the adaptation.  In lieu of seeing the film, one could read the novel while listening to Del Rey’s song on repeat and will be moved in ways the film alone cannot accomplish.

In the end, as Nick reads the last words of the novel aloud, they lack the depth that we feel as we read and reread them to ourselves at different points in our lives – taking from them what we need.  But maybe that is the point.  We can try to adapt it, to reclaim the beauty, synthesize it, and package it for the screen, but it can’t be replicated and – like Gatsby’s elusive love of Daisy — remains an empty gesture.