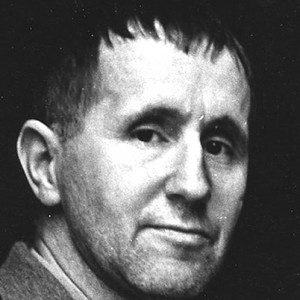 I would have never guessed fifteen years ago when I was introduced to his plays, that one day Bertolt Brecht and I would share the Hollywood experience. Of course, there are a few minor details that separate us, such as fame and the urgency that propelled him into this kind of life. But let’s just say … I can relate.

For the German playwright of The Threepenny Opera the aphorism “it’s a small world” never rang truer. Brecht’s socio-critical and highly satirical writings made him a favorite enemy of the National Socialists in pre-war Germany. In 1933 he was forced out of the country by the Nazi government. A detour via Paris led him to Denmark. Little did he know that this was only the beginning of his odyssey. Like the pestilence, the Nazis roared their ugly heads wherever Brecht decided to go. His travels took him to the Soviet Union and even Mali, but there seemed no end to the Nazi expansion. Last, but not least, Brecht arrived in the US in 1941. With the help of his good friend and fellow exile writer Lion Feuchtwanger, he settled in Los Angeles.

Southern California did not quite prove to be the land of milk and honey. As opposed to Feuchtwanger who continued being successful, Brecht encountered some hardship. The dilemma of keeping one’s integrity as a writer and earning your bread and butter was a new form of struggle that Brecht had to undergo. Before it was his wit and political cynicism that earned him credit. Now he found himself in a society that was based on glitz, glamour and fake smiles. His poems from the Hollywood period draw a biting portrayal of a life that he had very little sympathy for. But the machine had to keep on rolling. Against his conviction, he ventured out to “sell” himself in the big market place of ideas.

As a young German writer in Hollywood, I became very intrigued with the Brechtian episode in Los Angeles. Even a famed poet and one of the most influential developers of a leading acting method (next to Stanislawski’s), had to first find his bearings in this labyrinth. My quest started at Brecht’s first home, a typical Spanish-style townhouse in Hollywood on Argyle Avenue. Today, the 101 Freeway cuts across Argyle Avenue, but you can still see some of its original charm. Brechtonly lived on Argyle for a few months and traded the Hollywood district for Santa Monica”s fresh ocean breeze, but his restless soul did not allow him to stay there for too long either. One year later, a house on 26th Street in Santa Monica found his approval. “… one of the oldest, is about 30 years old, California clapboard, whitewashed, with an upper floor with 4 bedrooms. I have a long workroom (almost 7 meters), which we immediately whitewashed and equipped with 4 tables. There are old trees in the garden (a pepper tree and a fig tree). Rent is $60 per month. $12.50 more than in 25th Street.” He remained on 26th Street until his departure in 1947.

Nearby in the prestigious Pacific Palisades was Feuchtwanger’s residence “Villa Aurora” which became a regular meeting point for Brecht and many other exile artists. Brecht’s body of work continued and so did his recognition despite the commercial trends in the entertainment industry. The house on 26th Street became the birthplace of HangmenAlso Die, a screenplay for Fritz Lang and the play The Caucasian Chalk Circle.

The war ended and Brecht prepared his return to Germany. In 1947, a key event yet again expelled him from the country he resided in. He was ordered to a hearing before the “Committee of Un-American Activities”. In his testimony he drew parallels to the McCarthy witchhunt in the US and the persecutions by the Nazi government. As someone who had the misfortune to have experienced the latter, he was heard, but not longer permitted to practice his art in this country. He was accused of negative left-winged influences on the film industry. Brecht denied these accusations, but relocated to the Eastern part of Berlin the following day where he lived until the end of his life.

Today, Brecht’s body of work has hardly any impact on the status of the arts in Southern California, but the houses he once occupied still exist and pictures, letters and other writings have been carefully cataloged and stored in the “Villa Aurora” which now serves as a reference library on exiles and migrs.

On a personal note … I am probably more familiar with his works now than I have ever been. I have discovered a little bit of “Germany” in Los Angeles, albeit a Germany quite different than Brecht once knew. Bertolt Brecht would have been 101 years old on February 10th 1999.