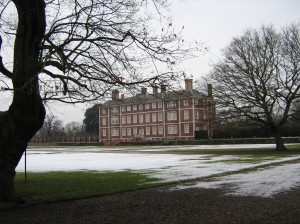 But there was, and is, another Dickensian London. A happier, greener London where Charles Dickens went for a break from his frenetic workload, for a bit of R&R with his family, for celebrations with friends. And on 7 February, his birthday, it wouldn’t have been surprising to find Dickens there.

It’s the borough of Richmond-upon-Thames, in southwest London, and it’s still a place for leisure and pleasure today. Walking round places in the borough associated with the author, it’s easy to imagine Dickens enjoying himself here.

Dickens’ favourite place for celebrations in Richmond was the Star and Garter Hotel, at the top of Richmond Hill. His first visit was in March 1838. He met friends there, dined there to mark birthdays and important events such as the publication of a book, and celebrated about 20 wedding anniversaries there.

Standing at the top of the hill, I can see why he loved the place. Besides being an excellent hotel, it was situated at the gates of Richmond Park and would have had a beautiful view over Petersham Meadows to the silvery curve of the River Thames.

The hotel is gone now, burned down in 1870, and the site is occupied by the Royal Star and Garter Home for disabled servicemen and women. The park is still here, though, and as popular as ever. Walkers, joggers, and cyclists; families with children and dogs and balls and picnics; horse-riders, kite-flyers, and bird-watchers; and anyone who just wants to get into a bit of countryside marooned in urban London comes here, all year round. It’s a huge rolling expanse of wild grassland, ponds, spinneys, woods and ancient trees, home to large herds of deer descended from those installed here by King Charles I in 1625, when he created the park as a royal hunting ground. Incongruously, there’s a large white building in the middle of it. Even more incongruously, it houses part of the Royal Ballet School, a study less recreation than de rigueur.

I love the view from the top of Richmond Hill. It is, I imagine, still much as Dickens saw it. It’s even, still, much as JMW Turner saw it before 1820, when he lived in the area and did numerous sketches and paintings of the scene. True, a few high-rises and a rugby stadium intrude in the distance, and with binoculars you can pick out the control tower at Heathrow airport, but mercifully this part of London has so many trees that even in winter most of the buildings are hidden. And the local council guards the view with commendable ferocity.

There’s a wide, sandy terrace here, with benches shaded by trees, and the Roebuck pub over the road to provide refreshments. I bet Dickens took his family to stroll along here; Tracy Tupman, in The Pickwick Papers, eventually moves to Richmond and “walks constantly on The Terrace during the summer” just as everyone does now, and not only in summer.

I set off down the hill towards Richmond proper, through the lovely Terrace Gardens, wondering what Dickens would have eaten to celebrate his birthday. I vaguely remember beef and oysters and goose figuring in his stories (and gruel, of course, but I doubt if he’d have celebrated with that). He’d be spoilt for choice these days, Richmond is full of eateries, from pizza chains to upmarket riverside restaurants. I pause for a coffee and snack at Alianti, a tiny cafe on the corner of King Street and Paved Court which does sinful pastries and generous, healthy salads. Best to have both, really.

Paved Court is one of several stone-flagged alleyways leading off, or near, the main street in Richmond town. Far from being sinister Dickensian lairs, however, they’re quaint pedestrian lanes lined with alluring shops whose only scary aspect is their prices. I walk down Paved Court past a bookshop, a milliner, a tea-and-coffee importer, a jewellers, award-winning chocolatier William Curley’s shop and another cafe before coming out onto Richmond Green.

The Green is surrounded by tall trees and elegant houses. In Great Expectations, Estella is sent to one of them. In real life, Virginia Woolf and her husband Leonard once rented rooms in No. 17, and today the actor Richard Attenborough lives on the Green (his brother David, famous for his TV programmes on the natural world, lives up Richmond Hill). In summer people lounge on the grass, picnic, play, and watch leisurely cricket matches. I’ve decided that cricket played on a green isn’t a sport, it’s an art-form designed to complete a lovely landscape.

Did Dickens go to the theatre to relax? In his day the theatre stood at the southwest corner of the Green, but the present Richmond Theatre lies diagonally opposite. It’s an ornate building of russet brick and peachy stone, designed by theatre architect Frank Matcham and opened in 1899. The auditorium is elegantly old-fashioned, gilded and plush, and the first-floor bar with stained-glass windows gives onto little balconies overlooking the Green. The theatre is very popular, and often presents plays before they transfer to London’s West End ‘theatreland.’

A few hundred yards away is another playhouse, the Orange Tree Theatre. It began life  in an upstairs room of the neighbouring Orange Tree pub, but now occupies a modern purpose-built home designed for its specialty, theatre-in-the-round. It too is popular and successful. As I walk between the two theatres I pass the magistrates’ court, built where George Eliot’s house once stood.

If Dickens’ birthday had been in summer, he might have taken a pleasure boat up the river to party on Eel Pie Island at nearby Twickenham, as Miss Kenwigs did in Nicholas Nickleby. The hotel there became a famous rock ‘n roll venue in the 1960s, hosting the young Rolling Stones, among others. Like the Star and Garter Hotel, it burned down.  In those days Eel Pie Island could only be reached by boat. Nowadays a graceful pedestrian bridge arches across to the bank at Twickenham, and the island is home to many artists, whose studios can be visited during the annual ARThouse open studios festival.

When the weather turns fine, boating on the river is massive. Eights and fours slit the water, their coxes shouting hoarse instructions; motor cruisers parade past, sailing dinghies and the odd sailboarder swoop from bank to bank, and hired rowing boats with enthusiastic but unseamanlike crews zigzag erratically among the rest.

Some of the rowing boats are hired from Mark Edwards at Richmond Bridge Boathouses, who specialises in hand-building traditional wooden craft. The staff work outdoors on the riverside promenade in summer, scenting the air with aromas of sawn wood and exotic oils. He once built a replica of a 17th-century submarine. And it worked.

Big pleasure boats depart from landing stages on either side of Richmond Bridge. I’ve taken one upriver, past Eel Pie Island and through Teddington Lock, beyond busy Kingston to Hampton Court Palace, home of Henry VIII. There can be few nicer ways to enjoy the river than basking in the sun on the deck of a boat.

Dickens would disagree. He was into swimming.

He wrote to his friend, the artist Daniel MacLise: “…swimming feats from Petersham to Richmond Bridge have been achieved before breakfast, I myself have risen at 6 and plunged head foremost into the water …” He must have been bonkers. Today most swimmers go to Pools on the Park, which are indoors and heated.

Dickens undertook his mad morning swims while he was living at Elm Cottage, on Petersham Road. He first rented this house in April 1839 for four months. It had a large garden, where Dickens and his companions played vigorous games. “Bar-leaping, bowling and quoits were among the games carried on with the greatest ardour … Even the lighter recreations of battledore and bagatelle were pursued with relentless activity,” groaned his friend and biographer John Forster.

Petersham is a pretty and expensive area less than a mile south of Richmond town, with a villagey feel despite the main road hammering through it.  There’s a very pleasant walk between the two, along the towpath and through the cow-grazed Petersham Meadows.

Dickens discovered Petersham in summer 1836, staying at a Mrs Denman’s place. It’s thought that this may have been the Dysart Arms, whose then owner was a Mr Denman. There followed a brief flirtation with the St Margaret’s area (a part of the borough between Twickenham and Richmond town) in summer 1838, when the family stayed at 4 Ailsa Park Villas for two months (now in Downes Close and converted to flats). But Petersham seems to have been favourite, and the family later remained faithful to Elm Cottage. Sadly, you can’t see it now; renamed Elm Lodge and accessed from the new Dickens Close (natch), it’s completely hidden behind high walls, gates and hedges.

Dickens also went to the horse races at Petersham and Hampton. There’s no longer a racecourse around here but between Petersham village and the river is Ham Polo Club, which welcomes spectators on match days between May and September.

Only about half a mile from Elm Cottage is Ham House, now owned by the National Trust and open to the public. You can drive there but I prefer to walk, either along the towpath or by going down the avenue of trees from Petersham, then hanging a right down a track between the side of Ham House and the polo club, followed by a left to the front of the house. This is the exact route taken by Sir Mulberry Hawk and Lord Frederick on their way to fight a duel in Nicholas Nickleby. Sometimes I still hear gunshots around here, but there are no furious duelists, lugubrious seconds or swooning ladies; the sounds come from a distant and well-disciplined rifle club.

Richmond’s a happy place, offering lots of ways to enjoy life and recharge your batteries. It’s good to think that long ago it offered the same things to Charles Dickens and so, perhaps, helped him return to his writing desk reinvigorated, ready to write another masterpiece.

The Real Story Behind Dickens’ A Christmas Carol

From Turkmenistan to America: How I Found Langston Hughes