“A Merry Christmas, uncle! God save you!” says Fred to Scrooge in the opening pages of A Christmas Carol, beginning the literary event that marks a turning point in the history of Christmas. 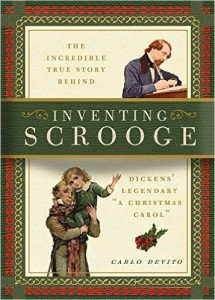 Charles Dickens popularized the expression “Merry Christmas,” which is the most enduring expression of the Christmas season.  Dickens created a vision of Christmastime based on joy, compassion, and companionship, which has become the blueprint of Christmas celebrations in western culture.

In mid-Victorian Britain, Christmas as a celebratory festival had fallen into decline. A wave of nostalgia heralded new efforts to revive it with the introduction of customs such as the Christmas tree and the Christmas card. But it was Dickens’ A Christmas Carol, first published on the 19th December 1843, which made the biggest impact on the public. In certain respects, Dickens almost invented Christmas as we know it today.

Many Christmas traditions, which feel as if they have been in existence for millennia, were actually not widely practiced until Dickens published his perennial tale of Scrooge’s spiritual journey from miserable old miser to the very soul of Christmas joy and generosity. The book depicts certain sentimental aspects of Christmas which are now so firmly ingrained in the season that Christmas would be unthinkable without them.  Christmas is a family-oriented festival based around plenteous food, drink and jollity, a season of good cheer, of dancing and frivolity, a time of warm-hearted goodness when we extend a hand to those less fortunate than ourselves.

“But I am sure I have always thought of Christmas time…apart from the veneration due to its sacred name and origin, if anything belonging to it can be set apart from that — as a good time, a kind, forgiving, charitable, pleasant time…the only time I know of….when men and women seem by one consent to open up their shut-up hearts freely, and to think of people below them as if they were fellow-passengers to the grave, and not another race of creatures bound on other journeys.”

The irony of this beautiful and insightful speech given by Fred is that, far from being an alternative to the Christian Christmas which he fears it may taken for, it actually promotes the very message of love and compassion which Christ brought to the world. The church, since the inception of Cromwell’s overly zealous Puritanism, had all but destroyed this message.

Dickens re-established Christmas as the season of goodwill to all men in the hearts and minds of the people. A Christmas Carol almost became a new form of gospel, causing people to behave better towards one another. William Thackeray said that the book was “a national benefit and to every man and woman who read it, a personal kindness.” The story seemed to touch the heart of everyone who read it, including tough business owners who suddenly became kindlier to their employees as a result.

But the source of the story lies in Dickens’ troubled childhood. The darker aspects of A Christmas Carol and Scrooge’s personality are a reflection of his own suffering caused by his father’s financial irresponsibility. When Charles was twelve years old, his father John Dickens, was taken into the custody of Marshalsea debtors prison. His whole family moved into the prison with his father except Charles, who was forced to leave school and work in a so-called blacking factory which manufactured shoe polish. Charles was deeply humiliated to being reduced to a common laborer.  He worked twelve hours a day in a rat-infested hellish environment, assigned to repetitively placing tops onto endless pots of polish.

This experience traumatized the young Charles Dickens, and he never really recovered from it. This horrible exposure to life as one of the exploited working masses colored the rest of his life, including much of his writing. The character of Scrooge is a reflection of his own paradoxical, unresolved feelings towards his father. Charles both loved and loathed his father, which explains why Scrooge is depicted in the story as both monster and angel. This duel personality of Scrooge is rationalized in the book by the epiphany he experiences as a result of the ghostly visitations he must endure.

The psychological interpretation of the story is Dickens’ attempt to work through his conflicted feelings towards his father, if only subconsciously. The joyful scenes of A Christmas Carol are a re-imagining of Dickens’ own early idyllic childhood experiences of Christmas before disaster struck and his father was sent to debtors prison.

Although the story is based around an old man, Scrooge, who approaches the twilight of his life, the story can be read as an evocation of childhood. In A Christmas Carol Dickens rekindles the spirit of childhood innocence and joy which jaded older people, exhausted by the trials of life, have lost. He subtly connects the concept of childhood with Godliness. The underlying message of the story is that we must reconnect with the child within, which is symbolized by the Christ child, whose birth is the source of the festival.

“For it is good to be children sometimes, and never better than at Christmas, when its mighty Founder was a child himself.”

The story resurrects this spirit of childhood innocence, the antithesis of cynical worldliness which Scrooge so vehemently represents at the start of the story. The experience of life as an adult can blind us to simple joys and we can easily become embittered as we grow older. The figure of Scrooge is a warning of where such disillusionment can take us. Perhaps the real spirit of Christmas can only be found when we reconnect with the little children we once were. One of the most moving parts of the story is when the ghost of Christmas Past takes Scrooge back to his own childhood. The ghost itself appears to Scrooge as a child-like apparition with a crown of light upon its head and speaks in oddly Christ-like ways.

“Would you so soon put out, with worldly hands, the light I give?”

The ghost proceeds to reveal scenes from Scrooge’s boyhood at his old school when all the children leave for Christmas. The boy Scrooge has been left behind and sits all alone reading. Scrooge is deeply touched by this vision of his former self in all his innocence.

“And Scrooge sat down upon a form, and wept to see his poor forgotten self as he used to be.”

But it soon transpires that the young Scrooge has a vivid imagination to compensate for his loneliness. He whiles away his time daydreaming about Ali Baba and Robinson Crusoe. Scrooge comes alive after being frozen hard for so long. His cold heart thaws as he connects with the child he once was. He loses himself in childhood joy, a time when he lived inside his fertile imagination. Dickens reintroduces Scrooge to a lost part of himself. This begins a process of redemption in his soul. It is a revelation for his readers, allowing them to perceive Scrooge in an entirely new light.

The theme of the vulnerable child reoccurs frequently in the story, but is most obviously personified in the pathetic figure of Tiny Tim — one of Dickens’ most memorable creations. During Dickens’ own childhood, he first became aware of the destitute lives of families living in the poorest quarters of London. He continually used his writing to draw attention to the plight of impoverished London children, suggesting that their suffering touched him deeply.

In Victorian London the only pleasure the poor could afford to indulge in was sex, but the result was thousands of children living in horrific filth and poverty. One statistic from the time sums up the hideous scale of the problem: in 1839 almost 50 percent of all funerals were for those under ten years old. Dickens brings these children to the reader’s attention in A Christmas Carol through such sympathetic characters as Tiny Tim, but also symbolically through the allegorical twins Ignorance and Want. The ghost of Christmas Present shows Scrooge, and also the reader, in blunt, direct language, the reduced and base condition of these feral children.

“This boy is Ignorance. This girl is Want. Beware them both, and all their degree, but most of all beware this boy, for on his brow I see that written which is Doom, unless the writing be erased.”

This stark and powerful passage resounds Dickens’ righteous anger about the fate of such children. Dickens believed that lack of education was the greatest enemy of these children. Without it there was no escape from the cycle of poverty. The children resorted to crime and delinquency, detrimental to society and the children themselves. With this in mind, Dickens supported the Ragged Schools, charitable institutions dedicated to providing free schooling to the poorest children living in the inner cities.

The character of Tiny Tim also symbolized the poor helpless children on the streets of London. The ghosts succeed in reigniting the flame of Scrooge’s frozen heart.  The character which moves Scrooge more than any other is Tiny Tim. When the ghost of Christmas Present reveals poor Tiny Tim to Scrooge, who Scrooge has completely disregarded up to this moment, he sees for the first time how ill the child really is.

“Alas for Tiny Tim, he bore a little crutch, and had his limbs supported by an iron frame!”

Scrooge realizes his own responsibility for Tim’s wretched state.  The boy is dying because he does not pay his father, Bob Cratchit, sufficient wages to provide the medical care Tim so desperately needs. There are parallels between Tiny Tim and Biblical figures whose sickness and deformities Christ healed, which is recognized by Tim himself and recounted by Bob, his father.

“He told me, coming home, that he hoped the people saw him in the church, because he was a cripple, and it might be pleasant to them to remember upon Christmas Day, who made lame beggars walk, and blind men see.”

Tiny Tim’s goodness is rewarded. Scrooge becomes a second father to the boy. 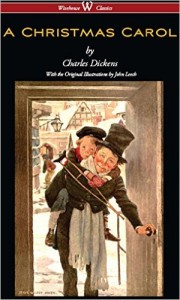 “I will honour Christmas in my heart, and try to keep it all the year. I will live in the Past, the Present, and the Future. The Spirits of all three shall strive within me.”

And so I leave you with these warm words expressed by Tiny Tim at the Christmas dinner table, with goose, turkey, brandy, holly, and his loving, happy family all around him, as the boy offers this simple blessing at Christmastime.

“God bless us, everyone!” 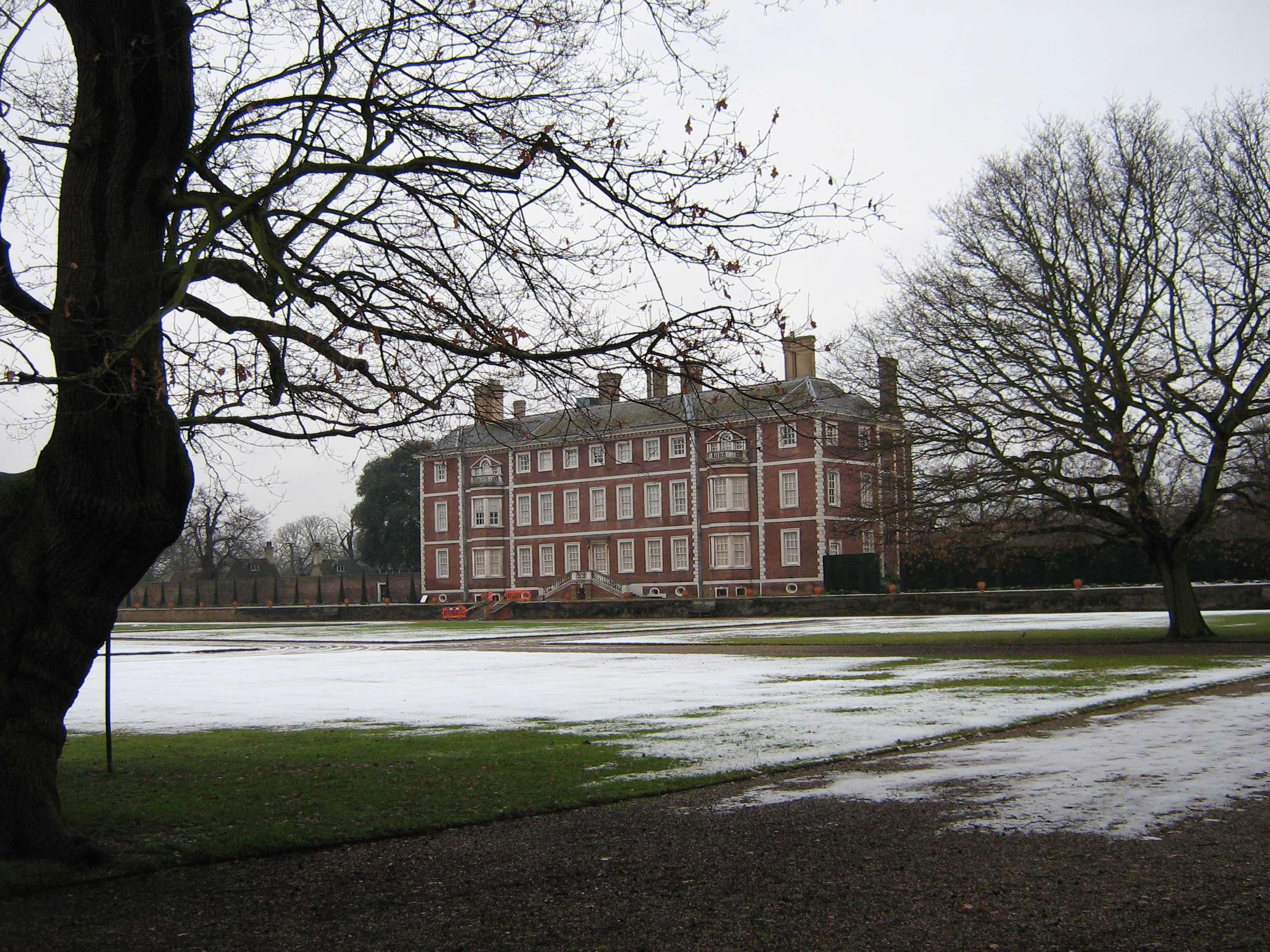 Chilling Out with Charles Dickens