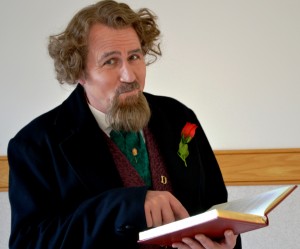 Mike Randall, Buffalo, New York meteorologist, reporter, and artist, walked through the seated crowd in coattails, ascot, monocle, and wig, up to a decked-out desk, from which he—quite remarkably—acted one of the world’s greatest stories for almost two hours. Randall has (nearly) memorized the entire reading, so the marvelous effort he puts forth is all for the integrity of the character. Ebenezer Scrooge, for example, displays the most unceremoniously perfect transition from “scrooge” to humble family man that you could possibly imagine. Scrooge’s nephew, Fred, the clerk, Cratchit, and his wife, “Mrs. Cratchit,” are each saturated in the kind of affection only an aficionado could muster.  And Tiny Tim? You guessed it: he didn’t die. So it’s clear that, after only six years performing Dickens in this way (compared to his 40 years performing Mark Twain), Randall cares very deeply about the story, the message, and the man.

Dickens was a socially conscious man who began his writing career as a journalist in England. A Christmas Carol, one of Dickens’ most famous works, is a beautiful commentary on a society obsessed with status and material gain. Greed and consumerism were rampant in the Victorian era, and like today, social reform was considered radical. But in a “whimsical and unique fashion,” Dickens shed light on the problems of his day, and showed the world how it could go about fixing them. Human virtues, like compassion and empathy, solidarity with all people, and a sense of humor, might not make you as famous as Dickens, but they lay the foundation for a good story.

The kind of story Dickens told, the kind Mark Twain told—Mike Randall brings us these stories, and the performance chops that engrossed audiences to the point of hysteria back in the day, so it’s no surprise Carly Cassano, Literary Traveler editorial director, wanted to ask him a few questions. He didn’t even have a chance to take off his beard.

Carly Cassano:  Good to meet you, Mike, that was an impressive performance! Do you need some water? What are you currently reading?

Mike Randall: I’m reading a book I didn’t even know existed, I think it came out around 2006, called Mark Twain Interviews. It’s interviews that Mark Twain did with newspapers and magazines. I’ve found new material for Mark Twain in so many places, so I thought, if I can get a few nuggets from the book, actual things he said to reporters, that would be awesome.

CC: So that’s your plan for the next installment?

MR: I don’t know. Right now I’m focusing on this one. People question why the show is edited the way it is; well, it was edited by Dickens. He wrote this version in order to perform it for the public. Now, he wrote A Christmas Carol in 1843, so by the time he started performing this version, much of the social reform he advocated and fought for in England was already taking place. People were becoming more aware of the poor, and stepping up and taking care of people, and not being so materialistic.

Dickens really took all of the traditions that existed at that time and put them all into one story. A lot of people credit him—and I’m not certain whether it’s true or not—with the idea of gluing together different customs and creating Christmas as we know it today: taking the day off; having a family dinner; good tidings, things like that. You know, in 1843, a lot of people didn’t get Christmas day off.

CC: Who are your favorite authors?

MR: Twain and Dickens. I always thought Twain was this huge icon, and in a sense he is in this country, but Twain only performed on stage about 200 times. And people didn’t really wait in line for tickets, or scalp tickets for a Twain lecture. But when Dickens came to the United States, there was nothing as big as him. The tickets sold for around two dollars.  Scalpers would buy up the first 50 tickets or so, and then sold them for as much as 20 dollars each. People would wait in the queue, or in line, all night like they do now for a concert. It was huge when he came here. Dickens was iconic in his own time. And to see the man who created these characters you read about (and if you were illiterate, somebody else would have read it to you)—because he wrote serial stories that you’d read about and follow along with like Desperate Housewives—to get the opportunity to see Dickens on stage, bringing these characters and stories to life, was unbelievable. People would pass out, they would cry…. Nothing that Twain did equaled that kind of celebrity.

But here’s an interesting sidenote: Of all the reviews I’ve read about Dickens performing on stage, hardly any were negative. They always talked about his set, his desk, the dress, how he played so many different characters—the thin little voice for Tiny Tim. The only bad, or wishy-washy, review that he ever got was written by Mark Twain. Twain saw him in New York City, and for years that’s all I knew about Dickens’ performances—because I’ve been performing Twain’s stuff for 40 years, and only been doing Dickens’ performances for six. So it made me wonder if Twain was a little jealous of Dickens. He had just started doing the lecturing thing, but I doubt very much if he ever filled a hall with 3,000 people like Dickens did (and that’s just what fit in the hall, people were turned away). So Twain was popular, and very funny, but he didn’t always get good reviews. Because Twain wasn’t exactly a literary type, you know, he was more of a stand-up comic. If there was a joke in Dickens, it came from the character; whereas Twain liked getting his jokes himself. His humor is described as lighting a firework under someone’s chair, walking away, and waiting for it to explode. He had a great pause. People would just die laughing when he paused.

Dickens was just an overall great performer. He wanted to be an actor, and though he didn’t end up an actor, he still did a lot of theater. When he came to the U.S. the first time, in the 1840s, he went to Buffalo and up to Montreal, and stayed long enough to produce a couple amateur plays. He also wrote a book, called American Notes, in which he basically trashed America. He even went so far as to say Buffalo women were unattractive. So he went home, thinking he’d never come back, but then in the mid 1850s when he was doing these readings, making a ton of money, he said to George, his tour director, I want to  do readings in America, would you go over there and see if they still hate me? And a lot of people did. And others felt cheated, because he was supposed to go as far west as Cincinnati and St. Louis on his tour, but he had to cancel those shows because he was ill—he died only a couple months later.

CC: Do you think storytelling and performance like this is making a comeback?

MR: I would consider storytelling, puppetry, magic, juggling, stuff like that, lost arts. But they’re all enjoying a comeback, or a second comeback. My belief is that we all love to hear good stories. Like when we’re little kids—or like when my kids were little—you could read the same story like 100 times, to the point where you do voices for all the characters, you know them so well. I don’t think you ever get tired of a good story. You might not have time, or you might not be able to get into the right frame of mind, but when you finally get a chance to sit down with a good character—something that stands the test of time—that’s a universal joy.

If you would like Mike Randall to perform Charles Dickens or Mark Twain at your next event, visit www.marktwainlive.com or www.charlesdickenslive.com. Randall is currently working with the Kurt Vonnegut estate to gain permission to perform his work and speeches, too.

Who Wrote ‘Twas the Night Before Christmas? A Literary Debate