It’s one thing to travel to the Russian countryside and recall some brilliant Tolstoy scene, or to duck into a flower shop in London and suddenly think of Virginia Woolf. Kitschy motels in America’s West almost always make me think of Lolita. But why on earth did Franz Kafka dominate my thoughts for the roughly two years that I lived in China?

As an exchange professor at Beijing Foreign Studies University, I spent a lot of time moving through cold, institutional buildings. When I saw a fire exit chained shut, I thought of Kafka. When a middling bureaucrat seemed to taunt me with his slow shuffling of my paperwork, I thought of Kafka. When I used my VPN to read news accounts of dissidents getting spirited away by the secret police on charges of “inciting social unrest,” I thought of those harrowing portrayals of “justice” in works like The Trial and In the Penal Colony.

I had taken the China gig because I’d heard there would be time to write, time to sight-see and bum around the country. I was feeling a little lost as a writer and figured the change in scenery might do me good. My young daughter didn’t have much say in the matter, and my wife Julie loved traveling more than me anyway, so what the hell? Why not Beijing?

We home-schooled Amelia and set out on exploratory food missions, trying crickets one night, donkey another night, scorpions from street vendors. I studied Chinese every day and hazarded conversations with bicycle repairmen and cashiers, often making a fool of myself.

The life we lived wasn’t so much that of ex-pats but as persistent tourists. We wandered a great deal, up and down the wild sections of the Great Wall, across mountain ranges in Yunnan, into the valleys of the gumdrop mountains near Guilin. We hiked Yellow Mountain. We visited the terracotta warriors. We trekked miles into the mist to reach a temple and eat in silence beside Buddhist monks. Wherever I went, wherever I aimed my DSLR, things Kafka seemed to pop up like a Bernie Sanders meme.

Recall that Franz Kafka (1883 – 1924) spent most of his life in Prague, working a tedious office job for the Workers’ Accident Insurance Institute, scribbling his odd tales after midnight until he died of tuberculosis at age 40—but not before leaving us the likes of The Hunger Artist, In the Penal Colony, three unfinished novels including The Trial, and one of the greatest stories ever written: The Metamorphosis. Fun facts: Franz was a nudist and a vegetarian, a lover of Yiddish theater, and he would laugh out loud while reading his work. His Hebrew name was Amschel.

It’s one thing to say a novel is Faulkneresque or Dickensian—but no author I can think of has given rise to a term as broad and shapeshifting as Kafkaesque. It describes a world where you might wake up one morning intending to go to your humdrum job as a travelling salesman and find that you’ve been transformed into a giant bug. Your sister brings you milk, but you now hate it. Kafkaesque describes a world where justice is arbitrary and capricious, where an elaborate code of laws exists somewhere but is unseeable though totally binding. Our dreams and nightmares can be Kafkaesque, but so too can weighty bureaucratic names like “The School of English for Specific Purposes,” under whose official umbrella I worked. The fact that I served under two deans—one a Party member and the other not—seemed like something old Franz would laugh at.

Kafka was funny, both as a person and a writer, so a Kafkaesque situation can be comical. I once got lost in a labyrinthine hutong trying to find the newest microbrewery in Beijing, walking for well over an hour stone sober with no smart phone to guide me. I was really lost but probably only a block from my destination as the crow flies. Labyrinths are common in Kafka’s work, as when Joseph K. from The Trial finds the courtroom in the attic, or when the mole in “The Burrow” digs and claws towards some unknown end. Bureaucracy can be funny, too, if it doesn’t harm you much. In the PRC, the fetishism for proper documentation (with red seals) is so domineering the best way to deal with it is to simply laugh, get in line again, and take note of the stony face of the official who scans your health records or travel visa with a finality like she’s just commuted your death sentence.

Then there are the not-so-funny security cameras everywhere, and these days, the facial recognition software used to tabulate social credit scores. Such things could more accurately be described as Orwellian—but before there was George there was Franz. Before there was Big Brother, there was The Committee of Affairs putting Joseph K. on trial for unspecified crimes in an unspecified court.

Also not funny: The metal grill covering the window of our first-floor apartment, making egress impossible in a fire. It was so Kafkaesque that we whined like Americans till we got transferred to a higher floor.

In grocery stores there were security guards who looked terrifically bored and seemed to exist only to remind me that I lived in a police state. The Beijing Zoo was so abject as to be surreal. I’d think of Kafka’s hunger artist as I turned the corner from the filthy, cramped tiger pen, half expecting to see a man in a cage starving himself to death.

Consider the Forbidden City. If a person defaces the giant portrait of Mao Zedung hanging over the entrance to the City, that numbskull will not only get thrown into prison for a long time, but a brand-new replacement portrait will be brought up from the crypt in about three minutes. That’s a Kafkan flourish.

In class, teaching some of the smartest twenty-year-olds on the planet, I was keenly aware of things I could say and things I couldn’t say in public. The three T’s—Tibet, Taiwan, and Tiananmen—were off limits. Each section I taught had a class monitor who was unfailingly sweet but who would have felt pressure to rat on me if I said something like, “Mao Zedung ate horse poop and liked it!” or “Xi Jinping seriously looks like Winnie the Pooh and I’m not kidding!”

Like many writers, I found myself in one of those periods where I had too many projects and not enough. Should I revise that stubborn old baseball novel or write something new? What about all those side projects that kept flirting with me? (For those of you have normal jobs where you use words like “liquidity” or “scalable,” being a writer is like living in a large Victorian house that you plan to renovate. The projects are endless. Finishing the damn thing and flipping it is the equivalent of selling a manuscript and seeing your book on the shelf.)

I forced myself to write a certain number of pages per day. And one afternoon, sitting down in my dusty white office to do some scribbling, I imagined a story where a foreign professor gets spirited away by the secret police for unspecified crimes against the state. I wrote one line and thought, “Oh shit, this is a novel.” It was no accident that my office felt like a prison, or at least like a barracks. Gray desk, gray filing cabinet, crumbling walls, bars on the windows. It was a Spartan room on the 5th floor of a building that had once served as a dormitory for faculty members in Mao’s China.

When my wife and daughter went back to the states during the long Chinese New Year holiday, I holed up in the apartment and wrote longhand for eight hours a day, till my hand cramped, and at night I read everything I could of Kafka’s stories, fragments, and diaries. One day on break I wandered over to the campus bookstore to find that several of the master’s books were available in Chinese, written by one Ka Fu Ka. This pleased me immensely. I had forgotten that he wrote a story called “The Great Wall of China,” and this pleased me some more. I was surprised—then not surprised at all to see so many of his books in translation. It made sense that Kafka would be popular in China. In a place that is so Kafkaesque, I supposed his work provided folks with an outlet for their angst. As a Chinese citizen, you better not stand up against the mass incarcerations of Muslims in the Xin Jiang region, but you can express your dismay at the horrifying instrument of torture carving the words “Honor Your Superiors” into the naked back of the prisoner at the center of In The Penal Colony.

My story became the story of a lonely expat who winds up as the only Westerner in a Chinese prison, where the inmates are directed to carry out the execution of one of their fellow prisoners. Like Kafka, my man has an affinity for foreign languages but has trouble with intimacy. For a time he does not speak with the other prisoners, though his Chinese is excellent. Obsessed with the need to write, he feels doubly punished by the fact that no art is allowed in prison, and every time he has any kind of literary thought, a guard jabs him in the ribs with a bamboo goad. In his cell languish men who have done terrible things, unknowable things, and men who are genuinely innocent. The guards can roam about doing their job, but they can never leave.

Seven years after writing that first line, K: A Novel crawled out of the burrow and got published. It might not make me famous, but I’m proud of it. These days when the thought of leaving the country is more prized and less possible than ever, it’s nice to open the book to a random passage and remember the place in China that conjured the scene. A battlement on the Great Wall. A bustling subway terminal. A stone path up Yellow Mountain. A pet market in Beijing, where crickets battle each other in tiny cages. Feels like traveling again. The tourist persists.

Winner of the Tobias Wolff Award in Fiction, Ted O’Connell’s work has appeared in the likes of Black Warrior Review, Puerto Del Sol, and Third Coast, and he has also written journalistic pieces for Hooked On the Outdoors magazine and In the Grove. He holds an MFA from the University of Oregon and have twice served as a visiting professor at Beijing Foreign Studies University. K: A Novel was published in May of 2020 by the Santa Fe Writers Project. His website is https://www.writerted.com/

Please check out our Zoom Interview with Ted to talk about his book and his time in China. 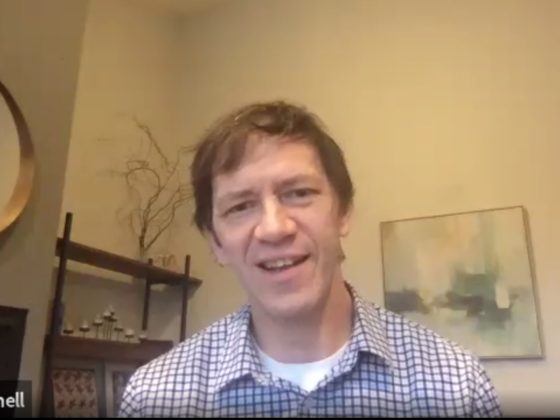