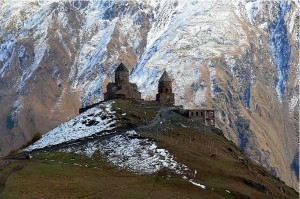 “I was traveling along the military road back from Tiflis.”

So begins Mikhail Lermontov’s 1833 A Hero of Our Time, the classic novel of the Caucasus: the mist-shrouded, emerald mountain range that once delineated the southern stretches of the Russian Empire. For Lermontov—whose own exploits in the Caucasus were as daring, dangerous, and unabashedly romantic as those of his anti-heroic protagonist, Pechorin—the Caucasus was more than merely a frontier outpost for Russia’s colonial power. For Lermontov, as for Pushkin before him, the Caucasus was the land of passion and possibility, of amorous intrigues with beautiful women, of frenzied duels and fatal blood feuds, where even the Tsar himself could not encroach upon the long-held customs of the region’s mountain tribes.

Lermontov’s Caucasus is a kaleidoscope of reality and myth. Here, the princess Bela is kidnapped and killed by a too-eager bridegroom; here too, in “The Demon,” a fallen angel battles a hopeless love for the proud Georgian queen Tamara, whose beauty echoes that of the “rich and blessed ground” of her nation. “Serpents breed” in the “dragon-haunted” pass of the Darial Gorge, near present-day Stepantsminda; the Terek River is “like a lion bounding.” Today, however, the Caucasus’s struggles are all too real. Much of the North Caucasus—regions like Chechnya and Dagestan—are fraught with conflict, too dangerous for even the hardiest traveler. Lermontov’s vast peaks echo not with thunder but with artillery fire; the rich slopes dotted with waterfalls and land-mines.

But in the tiny, former Soviet state of Georgia, its famed military road snaking north into the Caucasus, vestiges of Lermontov’s Romanticism still remain. Provinces like Khevsureti, near the Chechen border, are all but abandoned, their ruined towers blanketed by mist. In the villages of Tusheti, a grueling seven-hour drive up the dizzying Abano Pass, inhabitants still ferry their goods on horseback, past still-used pagan shrines women are not allowed to approach. In Svaneti, in the country’s northwest, a series of stone towers still stand as a testament to the province’s storied past: they were built not as defense against outsiders but rather to protect against intra-village vendettas.

But it is in the town of Stepantsminda, nestled in the shadows of Mount Kazbek at the northern stretch of the Military Highway, miles from the Russian border, that I can sense, with a shudder, Pechorin’s ghost. It is April, and trails of snow still spike down the rocky mountainside like lines in cut crystal; imploded citadels peer down at me from higher up the peak. Behind the village, a near-vertical ascent leads to the Gergeti Trinity Church, a fourteenth-century conglomeration of stone that, through a trick of the eye, seems to dwarf the snow-capped summit of Mount Kazbek behind it.

Beams in its wealth of endless snow,

And far beneath, in winding banks’ embrace,

As in a cleft where serpents breed their race”

I have come, like Hero’s narrator, on the marshrutka from Tbilisi, a three-hour dance with death that has taken me up the ice-glazed Military Highway, past the cathedral domes of Mtskheta, past the frozen lakeside fortress of Ananuri, past the snowy ridges of Gudari – now, unromantically, a ski resort.  Like Lermontov, I have come in search of a fantasy: a Caucasus peopled by demons and maidens, with duels fought in the streets and dragons peering out of the rivers. I ignore, in the poetic service of this pursuit, the pervasive smell of gasoline and vomit on the marshrutka, of swaddled old ladies munching the same gag-inducing lemon-cheese crisps I have encountered on every form of public transport from Batumi to Yerevan. At the opening of Hero, the narrator arrives at Kazbek in time for breakfast. Less hardy, I am only in time for lunch.

I ignore the yapping Kavkaz puppies and the hotel touts and the promise of hot water in the town’s only proper hotel and make my way across the rushing river to the village of Gergeti, where I am met by a woman I know only as Vano’s mother, the single remaining inhabitant of her son’s guesthouse in the April off-season.

The house is empty; it echoes with the wind. Old Soviet military caps still dangle from the hat-stand; the wallpaper peels and the intoxicating smell of pine infuses the corridors. I have arranged with Vano to rent three horses at midday; at three in the afternoon, four horses—beleaguered and fly-nipped and fantastically unlike the stallions I have imagined—trudge through the slush to our courtyard. But by the time we make it—two hours later—to the snow-bolstered courtyard of Gergeti Church, this hardly matters. Our boots are soaked through with the snow; we leave the horses tied up to a tree-branch to scramble the final third of the voyage. We are bruised; we ache. But as we stand at the summit, Mount Kazbek vanishing into the clouds above us, the Russian city of Vladikavkaz — “Rule the Caucasus” — just out of view, we sense that savage beauty, that divinely-infused grandeur that leads the narrator of Hero to write:

“Further in the distance the massive amphitheater of mountains grows ever bluer and mistier, while on the fringe of the horizon stretches the silvery chain of snow-capped peaks beginning with Kazbek and ending with twin-peaked Elbrus. It is a joy to live in a place like this! A feeling of elation flows in all my veins. The air is pure and fresh like the kiss of a child, the sun is bright and the sky blue–what more could one desire?”

Here, where all is silent save for the chanting of priests and the whinnying of horses, we are alone with that same enormity. We are dwarfed by the mountains, by the whiteness of the sky and the gray proliferation of the snow. Even now, the pass is full of dragons.

In the evening, when it starts to rain, we return to the empty halls of the guesthouse, and to Vano’s mother. In a thoroughly incomprehensible hybrid of Russian and Georgian she stuffs me with vegetarian pastries (it is Holy Week). I attempt to mime out a horse. The television crackles and flickers and sometimes smokes; she fries potato, flour, and cheese—a regional variation on the ubiquitous khachapuri—over a worryingly rickety gas stove. My companion—a vegan—demurs at the promise of dairy, placing a hand upon her stomach to signal illness. It is only after Vano’s mother spends an hour massaging her stomach and breasts, undaunted by our politely Anglo-Saxon protestations, and decisively cuts off her coffee supply, that we realize that my friend has accidentally invented a pregnancy. With our pidgin Georgian and guidebook Russian, with our blustering foreignness, we cannot convince Vano’s mother otherwise. She has determined that we—her only guests in what seems like months—will be the recipients of her folk remedies, her Turkish coffee, her laugh-punctuated stories, and we have no choice but to submit.

“And the tribes living in these gorges are savages/their god is freedom, their law is war.”

Such was Lermontov’s analysis of the Caucasus—a reminder that, although these mountain peaks captured his heart (and, ultimately, his life), he nevertheless remained the Russian aristocrat he was born: his Caucasus, both truth and falsehood, tells us as much as it does about Lermontov as it does about Vano’s loquacious mother. But Lermontov too, it seems, is aware of this. In A Hero of Our Time, he mocks one character whose obsession with the Caucasus is the stuff of self-invented fancy, in words that make us wonder if Lermontov, too, has intensified on the page his own experiences in these empty and snowbound lands.

“His coming to the Caucasus too was the result of his romantic fanaticism…I am certain that on the eve of his departure from his father’s village he tragically announced to some pretty neighbor that he was not going merely to serve in the army, but to seek death, because . . . at this point he probably covered his eyes with his hand and went on like this: “No, you must not know the reason! Your pure soul would shudder at the thought! And why should you? What am I to you? Could you understand me?” and so on and so forth.”

Certainly, I think grimly, these words apply—in a moderated state—to me. I too have come with my expectations, my own romance. And, perhaps like Lermontov, my desires have been only half-fulfilled. Curled up in quilts, sharing a bed to stave off the cold, listening to the echoes of Vano’s mother’s Russian soap operas from the far room, I know that much of Lermontov’s vision is an illusory one: an orientalist fantasy of a world that never existed.

But then I remember the sight of the church, the precipitous drop at the gorge, the mountains swelling and then stretching into the sky. I remember the feeling of standing, with wet socks and tangled hair and frost on my breath, where I can go no higher, alive with the thrill of the mountains and the overwhelming force of their silence. I remember the smell of horse-sweat, the snowballing mist, the way that everything around me reduces me, standing still, to nothingness.

Here be dragons after all.

Bleak Kaliningrad: Infused with the Happiness of Philosopher Immanuel Kant

In Search of Vladimir Nabokov in St. Petersburg, Russia

Hemingway’s Cuba: The Old Man and the Sea

Edgar Allan Poe: An Afternoon at the Wissahickon