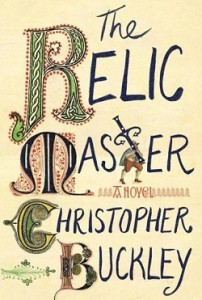 “Dismas might have purchased the finger bone of the Apostle Thomas, but there was something not quite right about the man offering it for sale.”

Thus begins Christopher Buckley’s novel The Relic Master, a tale of religious corruption, extreme sarcasm, and general ridiculousness. In the Holy Roman Empire at the start of the 16th century, Dismas is one of many dealing in the thriving relic industry, purchasing religious artifacts (such as the aforementioned finger bone of the Apostle Thomas) for his wealthy clients. Of all relics, none is more sought after than the Burial Shroud of Jesus and, after a financial disaster leaves him in ruin, Dismas and his artist friend Albrecht Durer decide to forge one. Hijinks, as is typically the case, ensue.

The Relic Master is not purely a work of fiction. A large percentage of the characters are historical figures reimagined into appropriately zany forms. Albrecht Durer, maker of fake Shrouds, was an extremely celebrated German painter. Dismas’ greatest ally is Frederick the Wise of Saxony, known to history as the man who kept Martin Luther from being killed by the Catholic Church. Even Dismas, seemingly an imagined character in a sea of historical figures, turns out to have a base in reality by the book’s end.

Though he cleverly blends details of these people’s real lives into his story, Buckley never relinquishes the flip, borderline absurdist voice present across his body of work. This is good, because this humor is by far the book’s best quality. It’s over 300 pages long yet feels like a quick read, punctuated by laughs, comical stupidity, and genuine action. It uses none of the cheap ploys writers sometimes employ to drum up suspense, yet it’s difficult to put down. Buckley does not need to manufacture dramatic questions to keep the reader entertained, because the story creates questions itself. Will Dismas be cursed to seven centuries in Purgatory? Will we learn what became of the true Burial Shroud of Christ? Will Pope Leo X ever realize that it’s tasteless to keep an albino elephant at the Vatican? Inquiring minds want to know.

Given the subject matter and tone, it’s impossible not to compare The Relic Master with Monty Python and their famous foray into medieval humor, Monty Python and the Holy Grail. The book does not even try to distance itself, referencing Monty Python in its own summary. This is unfortunate, because, amusing though it is, The Relic Master fails in some of the areas Monty Python succeeds. Most notably, it does not believe in the intelligence of its audience as much as its predecessor. The first section of the book is largely exposition, explaining the workings of the Church’s indulgence system, the origins of relics, etc. It’s certainly important for the reader to know these things, but the crush of explanation belies the fun of the rest of the novel. There are also a few story lines that are poorly paced or have unsatisfying conclusion.

Despite a few shortcomings, The Relic Master is by and large a fun, whimsical read. For fans of both capers and sacrilege, this book is a must.

The Buried Giant: Why the Fantastic Isn’t Always Important in Fantasy