In the final entry of her diary on 24th March 1941, Virginia Woolf left no clues to her impending suicide. Four days 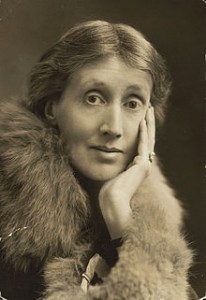 later she left Monk’s House, in the Sussex village of Rodmell, and took her last walk along the pathway that runs beside the tranquil River Ouse. Her walking stick was recovered first, discarded on the edge of the river bank. Three weeks later, on 18th April, her drowned body was retrieved.

Her devoted husband, Leonard Woolf wrote: “Death, I think, was always very near the surface of Virginia’s mind, the contemplation of death.”

Scholars of Virginia Woolf later speculated that her final book, “Between the Acts” which she completed on the 26th of February 1941, was the longest suicide note in the English language.

In the weeks prior to her suicide several anxieties consumed her; one being a complete dissatisfaction with her book, which she regarded as unfit to publish, despite the praise of her peers who had read the final draft. It is believed she suffered from what today we call manic depression. These intense bouts of “madness”- as she then described them – often occurred during the period between the completion of a book and its publication. But the writing process itself absorbed and exhausted her, physically and emotionally. It was not unusual for her to sequester herself for up to eighteen hours a day; lost in the realm of her stories.

During the weeks before her death she became acutely sensitive to the threats of war, especially since Monk’s House stood quite literally beneath the front lines of the air battle for Britain, and she had witnessed allied and enemy aircraft engaged in dogfights. Moreover, her two London homes had recently been bombed. In the event of a Nazi invasion she vowed that she would rather die by her own hand, than be chained by tyranny. During this period of depression and vulnerability, Virginia’s support network was absent; Leonard was dealing with his own personal demons, and her friends were many miles away in London. Following her death two suicide letters were discovered, one addressed to Leonard, and the other to her sister, Vanessa. She wrote:

Dearest, I feel certain I am going mad again. I feel we can’t go through another of those terrible times. And I can’t concentrate. So I am doing what seems the best thing to do. You have given me the greatest possible happiness. You have been in every way all that anyone could be. I don’t think two people could have been happier till this terrible disease came. I can’t fight any longer. I know that I am spoiling your life, that without me you could work. And you will I know. You see I can’t even write this properly. I can’t read. What I want to say is I owe all the happiness of my life to you. You have been entirely patient with me and incredibly good. I want to say that – everybody knows it. If anybody could have saved me it would have been you. Everything has gone from me but the certainty of your goodness. I can’t go on spoiling your life any longer. I don’t think two people could have been happier than we have been. V!

To gain further insight into the life of this matriarch of literature I visited Rodmell in the Spring of 2005 and also explored the scene of her suicide. Monk’s house had been purchased by Virginia and Leonard in September 1919. At the time they were living at nearby Asheham House, but the main attraction of Monk’s House for the couple was the dilapidated orchard, which they were both eager to restore. Monk’s House was also a convenient distance from their London publishing business, the Hogarth Press, and only four miles from the home of Vanessa Bell, Virginia’s sister, who lived at “Charleston” farmhouse near the village of Firle. (Owned by the National Trust and open to the public).

After Leonard Woolf’s death in 1969 Monk’s House was bought by the National Trust, and opened for public viewing. A simple plaque mounted on a flint wall reminds you that Virginia and Leonard Woolf lived there.

To reach the house, I walked up a short gravel driveway to a wooden gate which opened onto a garden, brimming with summer flowers, and sheltered by a variety of fruit trees. A cobbled pathway led to a green manicured lawn surrounded by a low wall of Sussex flint. Beyond the wall I saw St. Peter’s Church, a miniature edifice of Norman architecture, crowned by a stunted saxon steeple. Mounted on a wall in the flower garden were stone busts of Virginia and Leonard.

From here I could see the back of the house, and in particular a weathered clapboard hut standing in one corner beneath an oak tree. Through the large window I could see an armchair, a rug, a wooden office chair and a simple flat topped mahogany desk, on which lay the tools of the written word; pens, pencils, inkwells, nibs, blotting paper, pale blue vellum, dictionaries, diaries, and journals. There were also personal items, such as spectacles, family photographs, dried flowers, and ceramic pottery. This sentient scene convinced me that Virginia had just stepped out to fetch a cup of tea. Writing in his biography of Virginia Woolf, Nigel Nicolson observed:

“She acquired a wooden hut and put it in a corner of the garden from where she had a view of Mount Caburn. There she wrote her books during the summer months. After her death it was doubled in size for a studio. It should be halved again, to restore its shape and character.”

Following Virginia’s death, Leonard had expanded the “Lodge” as it was known, to allow his friend, Trekkie Ritchie, to use it as an art studio.

I was impressed to see that The National Trust had made a particular effort to preserve the details of life at Monk’s House between 1919 and 1969. For example, Virginia loved the color green. Beneath several layers of paint, the original color of the sitting room was discovered, matched and then restored. Crossing the threshold from the back garden into the main house the furnishings evoked a feeling of relaxation by their simplicity and comfort. Bright coloured ceramics sat on side tables and mantelpieces. Jugs, plates and tiled tables were created by Vanessa Bell and her husband, Duncan Grant, who played a large part in decorating the interior of the house. Many of Vanessa’s original paintings and pencil drawings hang on the walls of the dining and living rooms.

The village of Rodmell stands beneath the broad vista of the South Downs of East Sussex.

The River Ouse is a ten minute walk from Monk’s House. I walked down Rodmell’s quiet main street to a gravel track that crosses a cattle grid and continues up to a grass pathway that follows a channel of water dyed pastel blue by the chalk sediment of the Downs. This section of the Ouse was not wider than a Sussex country lane. It was here that Virginia weighted down her coat pockets with rocks and jumped into the river. One would be forgiven for not raising an eyebrow to the featureless landscape that hosted this tragedy; flat, ignoble; like an empty sheet of paper waiting for an idea.

There is still speculation as to why Virginia chose so suddenly to end her life, but her decision does not diminish her literary genius or undermine the legacy she left for the world. Her novels are now required reading in colleges and universities from London to Beijing. All of her novels, except for two, were written while cloistered with pen and ink in the wooden shed of Monk’s House which she called her “sanctuary”. Here she demonstrated her ability to articulate prose and manipulate narrative in such a way as to cross the boundaries of religion and culture, revealing the universality of the human experience.

After their deaths, Virginia’s and Leonard’s ashes were scattered in the garden of Monk’s House under two elm trees, which unfortunately are no longer standing.

“Monk’s House” is located in the village of Rodmell, south of the town of Lewes, in East Sussex

“Charleston Farmhouse” is located in the village of Firle, 4 miles from Rodmell.

For more information and times for public viewing go to the National Trust website.

“Guide To Rodmell” by Jim Bartholomew 1985

The High Mountains of Portugal: A Thoughtful but Underwhelming Study of Grief

“Fates and Furies”: Two Takes on a Marriage, One Impressive Novel