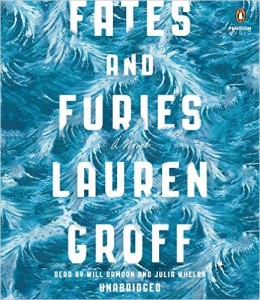 Lauren Groff’s Fates and Furies is an unusual accomplishment, not only because it is that rare ambitious novel that largely lives up to its ambition, but because it is essentially two novels rolled into one.

Fates and Furies is the story of Lotto and Mathilde, who get married at 22 just two weeks after meeting. Following 24 years of their relationship, the book is split into two distinct sections; “Fates,” telling the story from Lotto’s perspective, and Furies, from Mathilde’s. The two segments are as different as Lotto and Mathilde themselves. “She’s so calm and quiet. Ice queen,” one of their mutual friends remarks soon after they are married. “And Lotto’s the loudest. Warm, sexy. Opposites.”

“Fates” is an appropriate title for Lotto’s section because, though his life is marred by early tragedy and he is prone to both mania and depression, things seem to simply work out for him. From birth he is considered a “golden child,” and life seems to regard him as such. After failing as an actor, Lotto accidentally discovers his gift as a playwright and becomes world-renowned. Groff’s writing style when telling Lotto’s story is as warm and golden as he is. Describing his tropical Floridian childhood and bacchanalian adolescence, she flirts with magical realism. His own birth takes place in the eye of a hurricane, his sister’s described as the over-ripening of a fruit. The loss of his virginity takes place as he falls from the roof of a house on fire. The sensual, metaphorical style gives Lotto’s life the air of legend. And though the prose occasionally delves into purple territory, the vast majority of the time it works. Groff’s writing is fluid, evocative, and constantly hinting at a secret beneath the surface of Lotto’s charmed existence. “Fates” is a novella not only of beauty, but of anticipation.

Mathilde was a specter in “Fates,” but perspective is the center of “Furies.” Again, an appropriate title; while Lotto’s life is shaped by chance (which, we learn, has more to do with his wife’s unseen workings than with destiny), Mathilde’s is dominated by rage. Gone is the magical realism, the lushness of life from the book’s first segment. Mathilde’s life more closely resembles a classical tragedy or gothic horror; Groff even references Frankenstein and other 19th century works throughout the segment, books read in Mathilde’s lonely and frightened adolescence. It is, by comparison, less enjoyable to read, more gratingly literary and less beautiful. It also feels less real, despite all its added grittiness. And the sense of anticipation in the first section is more compelling than the revelations of the second. Perhaps, though, this is appropriate. Mathilde’s life is harsher, less palatable than Lotto’s. How could her story be any different?

The greatest strength of Fates and Furies is in its unflinching complexity. Lotto and Mathilde are not stereotypical people. He is narcissistic to the point of blindness, but with an unflinching devotion to his loved ones. She is an ends-justify-the-means survivalist, but her love for her husband is very real. With Mathilde, especially, it would be easy for Groff to fall into character conventions, simplifying them to easily-digestible forms that would match the reader’s expectations. But Groff regards her characters too highly to shortchange them in this way. She presents their many strengths and faults without ever moralizing or condemning them.

The cast of characters seem, at times, nonsensical because they do not fit easily into predetermined roles. At times, they have the very human problem of not even understanding themselves. Lotto and Mathilde’s relationship can be difficult to grasp for this reason, and some might feel distanced from the heart of the story as a result. But this is what ultimately makes Fates and Furies so satisfying. It is the story of something seemingly mundane (a marriage), told in an extraordinary way.

At Home With Virginia Woolf