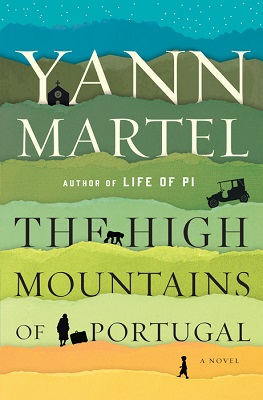 Never let it be said that Yann Martel doesn’t like wild animals. Fifteen years ago he published Life of Pi, a book about a man and a tiger that went on to win the Man Booker Prize and be adapted into an Academy Award winning film. His latest effort, The High Mountains of Portugal, revolves heavily around chimpanzees and the Iberian rhinoceros. As the saying goes: if it ain’t broke, don’t fix it.

The High Mountains of Portugal isn’t so much one novel as it is three novellas. Titled “Homeless,” “Homeward,” and “Home,” they deal with stories centered on the rural Portuguese village of Tuizello, all taking place at different points in the 20th century. In “Homeless,” a man named Tomas journeys to Tuizello in 1904. He has recently lost his wife and child, and in his overwhelming grief embarks on a quest for a mysterious religious artifact. 35 years later, in “Homeward,” a pathologist named Eusebio encounters someone from Tomas’ life while dealing with a particularly difficult death. “Home” takes place another 50 years on, in which a Canadian senator deals with his own loss and decides to move to Tuizelo. It is only then, nearly 80 years later, that the consequences of Tomas’ journey are discovered.

This is a sparse summary of these men’s stories, and for good reason. The novel is less about the people in it than it is about its own themes. Very few of the characters’ lives are sketched in detail; most are echoes, whose beginnings, ends, or middles are left unexplored. Instead, Martel focuses on the ways three different men express grief. There is certainly a concrete narrative running through the sections, but more than anything the connection is an evolution of loss. And because this is a Yann Martel book, Chimpanzees play a surprisingly poignant role in the grieving process.

Mountains is a carefully thought out novel, with subtly developed motifs and understated yet effective language. But for all of its objective merit, it is far from a masterpiece. Since the story is of secondary importance to the novel, key elements are often explained in large, exposition-heavy portions. It suffers, too, from a lack of focus. Martel often writes for pages about the workings of a car or the quality of a chimpanzee’s movement. This meandering reaches a point where it no longer serves either the plot of the book or its emotional content. Mountains is over 300 pages long, yet it feels like there is very little story in those pages. The book is, at times, as barren as the Portuguese landscapes in its title.

There is also an element of magical realism in the book that doesn’t quite land. Magical realism is a polarizing genre and there are some, I’m sure, who will read Mountains and find no issue with it. Where it fails in my estimation is that, rather than having a supernatural element integrated properly into the world of the story, there is only one incidence of it in the book. The result is a sort of genre dissonance, one that is more jarring than intriguing.

The High Mountains of Portugal lacks bite and is surely not destined for the success of Life of Pi. It provides a thoughtful meditation of what it means to live with grief, though, and an interesting (if underutilized) narrative. There is also a precocious ape who learns to cook, and that’s difficult not to enjoy.

The Magic of Venice and ‘The Thief Lord’

At Home With Virginia Woolf