Western Samoa claims the largest proportion of full-blooded Polynesians in the world. At last count there were 162,000 of them, a collection of robust, often tattooed, sometimes obese, lava lava clad folks who live on the two main islands of Savai’i, and Upolu. Here too, for many of these people, the tempo, the style of life is much the same now as it was in 1889, when Robert Louis Stevenson and his wife Fanny first appeared, and for some of these folks, the conditions of island happiness remains the same. It’s a happiness based on a healthy wife, plenty of children, a Fale for cooking in, some coconut trees, bananas, taro, breadfruit trees, a church, a canoe and a few pigs.

But fortunately or unfortunately, independent Western Samoa is beginning to stir. A new airport has been built, new hotels too, and when word gets out about her beaches, mountains and general beauty, the tourist onslaught will begin. Added to this, Western Samoa is beginning to consider entry into international life, and into a world community that may offer more than subsistence living.

Still, for Robert Louis Stevenson and his wife Fanny, who in 1889 first saw these islands, it was the traditional way of life, coupled with its verdant beauty that first caught their attention. All of this was further enhanced by the presence of the small port town of Apia, which offered a few western style amenities, and a handful of amiable
expatriates.

It was the combination of all these elements that lured them into paying $US 4,000 for a 314 acre piece of jungle clad property. And, it was here on a cooler than sea level 650 foot plateau, a place nearby a waterfall, a stream, and at the foot of 1,500 foot Mt. Vaea that the Stevensons and helpful Samoans hacked away the jungle and built a modest two story house. It was a house with a red roof, a place that sported two verandas, one upstairs, one down, and with all due ceremony was dubbed Vailima.

The name, Vailima, meaning five streams, may not have been quite accurate since there weren’t that many streams. Still, Stevenson liked the name, it stuck, and in time, when fully built, Vailima became a sort of Mecca for, not only Samoans but for the small expatriate community of Apia: Germans, English, a few Americans, and numbers of overseas visitors who appeared from time to time. Here dinner parties, dances, and picnics were held, all of them lively, happy occasions.

However, none of these social events were allowed to interfere with Stevenson’s closely guarded writing discipline, which was done in a room with a view of Mt. Vaea. It was there he wrote such things as Ebb Tide, The Beach At Falesa, The Bottle Imp, David Balfour, and his unfinished masterpiece, Weir Of Hermiston. But, what was Stevenson doing in the South Pacific? What brought him from the hard won scenes of success in both Europe and America? Why did the Stevensons first spend two years wandering about in a variety of ships to Tahiti, the Marquesas, Hawaii, the Cooks, Tonga, the Gilberts, New Caledonia, the Tokelaus and Australia? Why did he decide to spend what would be the last four years of his life in Samoa?

Biographers agree that Stevenson did it because he loved the sea, because he reveled in adventure, and he did it because it would be good for his health, which was never good. He was tubercular, a chronically thin lanky man, who in later years, firmly believed that a life at sea among these myriad islands would benefit his health. This may or may not have been true, but the people who benefited the very most were his readers, the ones who, to this day, continue to find pleasure in one of the best books about the South Pacific, In the South Seas, which was completed at Vailima. Fortunately, for Stevenson, by the time he and Fanny first sailed away from San Francisco on the sailing yacht “Casco” in 1888, he had achieved a literary reputation. His Dr. Jekyll and Mr.Hyde, Treasure Island, and Kidnappedhad come out, and unlike his earlier books that may have been overlooked, these books ensured the economic ability to sail, to travel at will, and to build his dream house, Vailima, in Samoa.

Building that house in early 1890 was rough on the Stevensons. They labored hard, and lived austerely. They got away occasionally, to Australia and other Pacific islands. One of these, an early 1891 junket, required Louis to go to Australia to meet his mother who was coming to Sydney. Fanny stayed in Samoa.

Stevenson met his mother in Australia, but the change of climate caused him to become very ill. Fortunately, help was at hand and it was his mother who nursed him until he was well enough to sail back to Samoa, where at Vailima he recovered rapidly. But, his mother, appalled at the primitive life the unfinished house provided, quickly decided to go back to Sydney and wait until conditions at Vailima improved. By fits and starts matters were improved, and in May 1891 Stevenson’s mother returned. There at Vailima she found herself a part of a congenial family, a family composed of her son Louis, his wife Fanny, Belle Strong (Fanny’s daughter by a previous marriage), her son Lloyd, and Belle’s son Austin. Added to this was a brace of attentive Samoan Servants. It was a big, active, and animated household.

As for Stevenson and Fanny, they were reasonably happy, but because Fanny was several years older it was said that he saw in her more of a mother than a wife. Biographers report little evidence of any display of affection between them, and at Vailima they had separate bedrooms. But all was not completely peaceful in Western Samoa. There were, about 1892, political problems, nearly warfare, that set England, America and Germany at odds. All of this left the Samoans out in the cold, and some of their chiefs were imprisoned for objecting to a foreign takeover. Stevenson took an active part during this bad patch of time. He strongly supported and gave aid to the Samoan cause, and they responded with profound gratitude and Stevenson, known as “Tusitala, the Teller of Tales,” became a revered member of Samoan life. In the end though a foreign power did prevail and Western Samoa was annexed to Germany.

For Stevenson, who by that time had reached literary prominence, life abruptly ended on December 3rd, 1894. That evening while helping Fanny with dinner, Robert Louis Stevenson had a brain hemorrhage and died. Then on the heels of his death, forty Samoan chiefs, who knew that their beloved Tusitala wanted to be buried on the top of Mt. Vaea, appeared and bore his body to a final resting place on the summit. Had he lived beyond that brief span of 44 years, one wonders what further impact he’d have on the literary world or what future benefit he might have produced for the Samoan people.

One morning, more than a century later, we left the quiet sanctuary of Aggie Grey’s Hotel, and in the cool of the morning we taxied to Vailima, where the land behind Apia slants upward. We went to the house, now a museum, and now a place that serves as a legacy of the past. Vailima, an important legacy, has in order of appearance been used as a government house by the Germans until they were evicted by New Zealand in World War I, next by the British as the same, and now as the home of the Samoan Prime Minister (who doesn’t live there). The house, however, is open to the public five days a week.

But it was to the summit of jungle-clad Mt. Vaea that we were bound that day. We were making a pilgrimage, a substantial sweat-producing pilgrimage up a rough path that finally fetched up in a clearing. From there Apia lay at our feet, and in either direction the island of Upolu with its line of breaking surf, was spread out below. There where we stood, in the center of that clearing, were the simple tombs of Stevenson and his wife Fanny, who died in California in 1914 and whose ashes were brought back to Samoa. One could see why Stevenson had chosen this place, and on the side of his tomb we read his epitaph.

Under the wide and starry sky
Dig the grave and let me lie,
Glad did I live and gladly die
And I laid me down with a will.
This be the verse you grave for me.
Here he lies where he longed to be.
Home is the sailor, home from the sea.
And the hunter home from the hill.

Not many people make that substantial trek these days. Few Samoans do it, and only a handful of nostalgic Stevenson buffs make the attempt. But the thought surely occurs to those of us who do. How pleased he would be to see that so much of the essence of Samoan life is now as it was then. 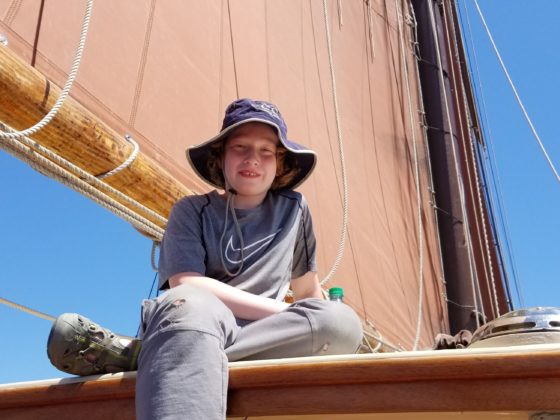 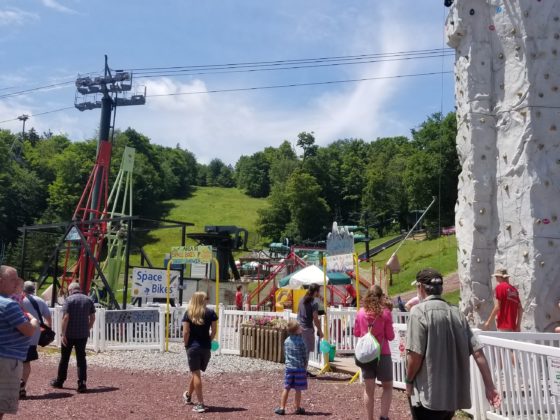