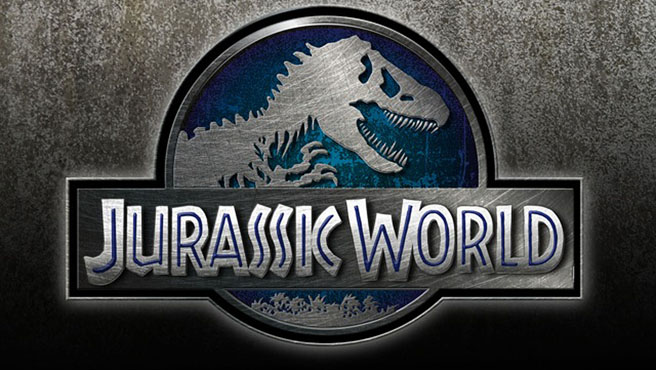 Jurassic World is a fantastically fun movie and anyone who wants to escape life and the heat for a few hours should most definitely see it. That said, it’s also one of those movies you go into knowing you are along for the ride and if it’s fun maybe you shouldn’t question certain things like over-the-top stock characters.

In fact, in movies like Jurassic World those type characters can actually work really well. Chris Pratt’s Owen, an ex-military, velicoraptor whispering, rebel-with-a-heart is a likable character from start to finish. The most successful character of the movie, I would argue, is Jake Johnson’s Lowery, a greek chorus-esque observer who is there to poke a hole in the filmic bubble of the situational absurdity that is the film’s concept (no way anyone is trusting a dino theme park after the events of Jurassic Parks 1-3) while also acting as a love letter to the franchise and its fans (the shirt, the dino figurines, his dramatic overture to stay behind).

Lowery doesn’t do much, spending the whole film in the control room, but he is one of the reasons the movie works so well. Because the movie knows it’s over the top and it wants us to know that it knows. I don’t want to be a buzzkill, but Jurassic World is a horribly unsafe theme park idea and couples thrown together in high-intensity situations are sometimes just coworkers. Outside the control room, we can go full-Jurassic World goodness (and it’s amazing in theory, from the on-site Margaritaville to genetically modified miniature dinosaur petting zoo – boozy triceratops rides, sign me up!) and we can, of course, toss together two completely incompatible characters because, of course, opposites attract and sexual tension in high-stress situations and all that.

But it’s not the pairing of Owen and Claire that I have a problem with. As summer blockbuster pairings go, they’re fine. My problem is Claire in general.

I get using stock character types for big budget action movies. Less character development necessary, more time to get down to the action. And Owen is a fantastic hero. Lowery is a spot-on observer. Claire is… a problem.

First, of all, I should say for the record that my least favorite female stereotype in the bag is the type A, uptight workaholic career gal who just needs to relax. She’s all hard angles and asymmetrical hair that looks like it required a protractor to accomplish. And Chris Pratt is supposed to be the freewheeling vehicle by which she is going to learn to loosen up. Groan.

Now, maybe she’s there to make fun of the horrible cliché. (When she ties up her shirt and says she ready to go, I thought this has to be a joke. An homage to Laura Dern’s 90’s wardrobe in Jurassic Park perhaps?) After all, Lowery lets us have a little fun with the nature of this action fantasy. But if Bryce Dallas Howard’s Claire is doing the same for bad female action movie characters, it just doesn’t work. 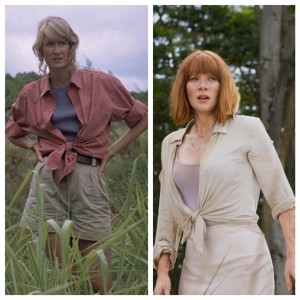 First of all, it’s 2015 and this blockbuster season has already given us Imperator Furiosa circa Mad Max: Fury Road, Black Widow from Avengers, etc. There is no room for Claire. I rewatched Jurassic Park from 1993 and Laura Dern has more agency in her pinky finger than Claire has in this entire movie. (When she tells Hammond: “We can discuss sexism in survival situations when I get back.” Like a boss.)

Even the scene where Claire is arguably the hero, freeing the T-Rex to fight Indominus, she is reduced to a helpless female archetype almost immediately. The movie had me pumped, on the edge of my seat, suspending ALL the disbelief that this chick can outrun a T-Rex in stiletto heels. Just let her do it. Don’t make her fall at the last minute and splay out in an overly dramatic position of helpless distress circa Fay Wray 1933. 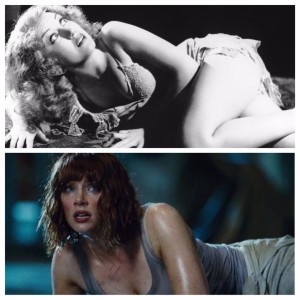 The similarities between the dinosaur looming over her in her torn white outfit so immediately conjure images of King Kong that it had to be intentional. But why reduce her to this when she just looked so damn cool outrunning a dinosaur in spike heels? I almost fell walking in flats today. I wanted more for her.

Not to mention, when Indominous Rex first escapes, how much time passes before Claire even mentions Gray and Zach? Jimmy Buffet cared more about saving his two margaritas than Claire did about her nephews for the first half of the movie.

So why make it a plot point that this character wants children? It’s irrelevant to the story and there is not one thing that happens in the entire movie that makes me believe she is gearing up for motherhood. While children have typically played large roles in the Jurassic Park franchise, there is no need to push this quality on her.

Similarly, her big so-called turning point as a character comes as she tends to a dying brontosaurus. (Note: her nephews are currently being chased by a murderous dinosaur.) And as a single tear falls down her cheek to show how nurturing and caring she is, her aggressive hair turns to perfect beachy waves. Also, for anyone keeping track, her nephews are still being chased by a dinosaur.

But ultimately, she is really inconsequential to the movie. And that’s where the real problem lies. Jurassic World is an exciting ride, equal parts escapism, action, humor. It knows what it is and it doesn’t take itself too seriously. So, one could argue, its characters shouldn’t be taken too seriously. And maybe that’s true. But I’m sure we will be seeing a few Owen/raptor costumes this Halloween. How many Claires will we see? Not many, I’m guessing. 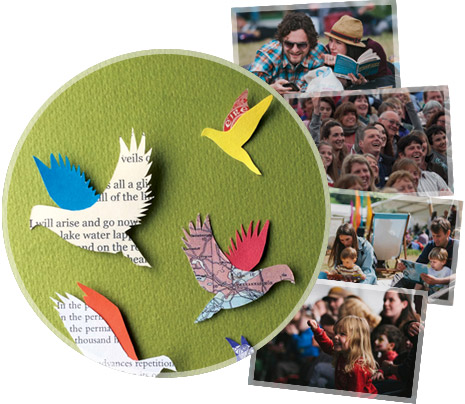 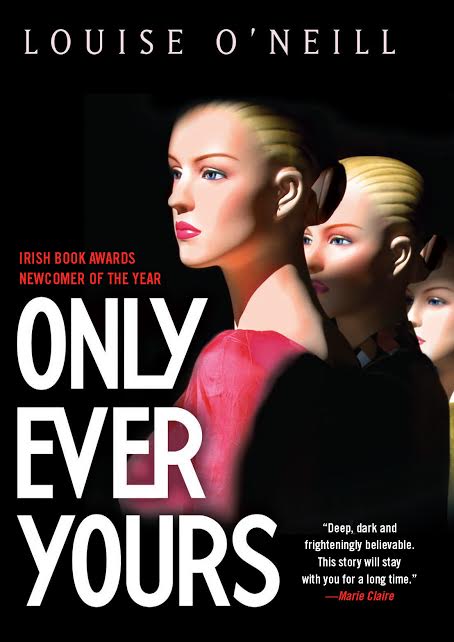 Room 101, for Teenage Girls: A conversation with Only Ever Yours Author Louise O’ Neill