Trees in thick green leaf fuzz the banks of the Beaulieu River. The foliage wall is pierced occasionally by inviting, narrow inlets through the trailing branches, or by the lawns of big houses where nobody seems to live. Songbirds call, gulls wheel overhead and an egret flaps up from the tidal marsh between the trees and the main channel. The water shines in the sun, and it feels softly warm when I trail my fingers in it. My kayak drifts as I rest and bask.

I’m paddling slowly up-river, in the slack water between tides, between the hamlet of Bucklers Hard and Beaulieu village in the New Forest National Park. It’s very quiet and peaceful.

It would have been totally different when Jane Austen, her sister Cassandra and their mother came up here.

Jane, Cassandra and Mrs Austen moved to Southampton in late 1806 after the death of Jane’s father the previous year, staying there until 1809. They lived with one of Jane’s brothers, Frank, and his new wife Mary, initially in lodgings and subsequently in a rented house in Castle Square. Among their pastimes were boat trips, to places like Netley Abbey and Beaulieu (prononounced Bewley).

I bet the excursion up the Beaulieu River was Brother Frank’s idea. He was a captain in the navy, and Bucklers Hard is linked to Admiral Lord Nelson and the great naval victory at the Battle of Trafalgar. The battle had taken place in 1805, so it must still have been fresh in everyone’s minds.

In Jane’s day Bucklers Hard was a working shipyard. Three of the ships for Nelson’s Trafalgar fleet were built there. As the women’s boat passed by, there would have been the noise of sawing and hammering, the clanging of metal on anvils, whinnying horses, shouted orders. There would have been the smell of sawn wood and hot tar and burning coal. The shoreline would have been buzzing with activity around half-built ships, smoke billowing from smithies, ox-carts plodding up the main thoroughfare and barges jostling for space to unload supplies at the wharf. The water would probably have been polluted.

It was an industrial site.

Now it’s a heritage site, and beautiful. The one short ‘street’ is a wide grassy area running back from the river between two rows of neat, brick  houses. They were once the homes of important shipyard workers, and some are still privately occupied, but most now accommodate a fascinating museum and a tiny chapel. The pub was doubtless extremely unsavoury in Jane’s time and definitely no place for a lady, but now it offers extremely savoury food and drinks and is definitely gentrified. The hamlet retains its links to shipping via the neighbouring yacht marina and the incongruous little black shed by the river, where kayaks like mine are hired out.

Beaulieu village, with the neighbouring abbey ruins and the great house of the Montagu family, would have been more attractive for the Austens. By the time the boat party got here I imagine Jane would have been itching to stretch her legs in the nearby forest.

Two centuries later, I want to stretch mine. The New Forest is in Hampshire, the English county best loved by Jane, and it’s a wonderful place to walk, ride horses or bicycles, sail or kayak, watch birds or butterflies, and seek out flowers and ferns, ancient sites and ancient trees. In fact you can do pretty much any outdoor activity here except mountaineering. But, like Jane, I prefer walking, and one of my favourite routes is in the northern part of the Forest.

The New Forest has a long and complex history which has produced an equally complex landscape with unique traditions. There are tracts of ancient oak, beech and yew woodland going back to the 11th century, when William the Conqueror declared this a royal hunting ground and pretty much excluded peasantry like us; open grassy areas, so manicured by grazing that they’re aptly called ‘lawns’; great swathes of purple heather smelling of honey in summer, thickets of gorse, hawthorn and holly, swampy bits patrolled by red and blue damselflies, 19th-century plantations of oaks and conifers, farms and fields, villages and pubs. My walk takes in some of these varied landscapes and their stories.

I descend the lane from Frogham village, passing 13th-century Abbots Well where water for animals still trickles from a stone trough (the lidded well beside it was for people) and head up a wide, stony track into the heathland. It’s a huge area of purple bell heather and mauve ling, softy humming with bees. Like Jane’s Emma I’m relishing “the exquisite sight, smell, sensation of nature, tranquil, warm, and brilliant.”

Below, on my right, the shallow valley of Latchmore Brook runs parallel to my route. The bottom of it is shade. That doesn’t mean it’s shady — the scattered trees and bushes in the valley bottom give little shelter from the sun — it means a place where ponies gather on warm days because for some reason the air is cooler there and there are fewer flies.

Today at least 20 ponies are grazing beside the little stream. Brown, chestnut and black, their summer coats are glossy and they’re well fed. You’d never think they’d been out in the open all winter.

The Forest’s famous for its free-roaming ponies. They all belong to someone — they’re branded to identify their owners — but are left out in the forest all year round to fend for themselves under Commoners Rights going back to medieval times. Once a year they’re rounded up for health checks and for payment of pasture fees to the Agisters who manage the Forest; their tails are clipped in a special way to show the fee has been paid. Some are sold, foals are branded, then they all go back into the woods again.

They wander where they please, even into the Forest villages. The villagers have cattle grids across their driveways and must keep their garden gates firmly closed, otherwise their flowers and vegetables become pony lunch.

The ponies also graze the verges and hedges of the unfenced roads, and they’re far too used to traffic. They graze with their rear ends stuck out among the cars, suddenly decide to amble across the tarmac with complete disregard for vehicles, form knots under shady roadside trees and overflow onto the road itself. Consequently, tragically, every year ponies are hit and killed by cars.

Not only ponies graze the forest. As I crunch up the track through the heather, long grey ears poke up behind a coconut-scented gorse bush. Then an inquisitive grey nose appears, followed by the rest of the donkey and half-a-dozen of his mates, curious about what’s making the noise. In the distance are stocky cattle, ginger and pied.

A bit further on is a large, scrub-covered mound, and I climb up it. The mound is marked as a tumulus on the map. Actually it’s a fake U-Boat pen.

This area of the heath, called Ashley Walk, was used to test bombs during World War II (they’ve all long been cleared) and the fake pen was built to find out if the bombs could pierce such structures. Clearly they didn’t, and after the war the pen was simply covered in earth and the scrub grew up. Bits of reinforced concrete are visible where feet have worn away the soil.

From the top of the mound I can see a long, straight path, about six feet wide, through the heather and gorse. That was a fake railway line, for accuracy tests. Buried in the heather a little way off is a white concrete arrow, to help the pilots navigate. Then, bombers would have growled overhead and there would have been intermittent huge explosions as another bomb was tried out. Today all I can hear are skylarks, and the high wild exclamation of a buzzard.

I descend into a dip and pick my way across a bog, through a gate into Alderhill Inclosure, a woodland of tall beeches, twisted oaks, hawthorns, hazels and ferns. The shade is welcome, as is the softness of the mossy path. In spring there were pools of bluebells here. Suddenly there’s a jerk of movement among a thicket of hazels, a flash of black-and-white rump, and a band of speckled fallow deer bounds away.

The New Forest shelters wildlife ranging from shy foxes and badgers, through ubiquitous grey squirrels and deer, to tiny shrews and mice. The list of birds is encyclopaedic due to the variety of habitats. It goes from tawny owls, hobbies and hen harriers to wrens and goldcrests, and includes rare Dartford Warblers and elusive nightjars.

Last autumn I heard a strange, regular barking in here and wondered what that dog was up to. It didn’t seem to be moving. I got closer to the sound, and there in a stand of pine was a big fallow stag with his harem, the stag barking to warn other males away from his ladies. I passed him at a respectful distance.

In autumn new faces appear in the woods: pigs, released to eat acorns under the old Commoners Right of Pannage. They too are best treated with respect, but I only worry about them when I’m driving. Because these pigs are enormous. When they trot, the ground shakes. When they flap their ears, a gale blows. And they’ve no more road sense than the ponies. Hit a pig and it will probably just snort, but your car will be a write-off.

The woodland path begins to climb as I move seamlessly into Sloden Inclosure. It’s muddy and tussocky underfoot now, and I’m glad to reach the drier crest of the rise where a group of old yew and holly trees are already red with berries. The yew berries are waxy and translucent, those of the holly shiny as Christmas baubles. Tradition says abundant berries are a sign of a hard winter ahead.

I stroll along the ridge among the trees, and reach a low bank cut by the path. It’s so low and overgrown that you could easily miss it completely. I trace its route: it forms a square enclosure, only about the size of a tennis court, with the remains of a shallow ditch on the outside. This is ‘The Churchyard,’ allegedly the site of a royal hunting lodge. It could be; or it could be the site of a long-forgotten farm.

Soon I come to the edge of the woods. I’ve walked a circle and now Latchmore Brook and its lawns are ahead of me again, with Hasley Hill and its crowning copse on one side and Frogham on the other, hidden in trees. I sit beneath a hawthorn and just gaze, agreeing with Jane that “To sit in the shade on a fine day and look upon verdure is the most perfect refreshment.” 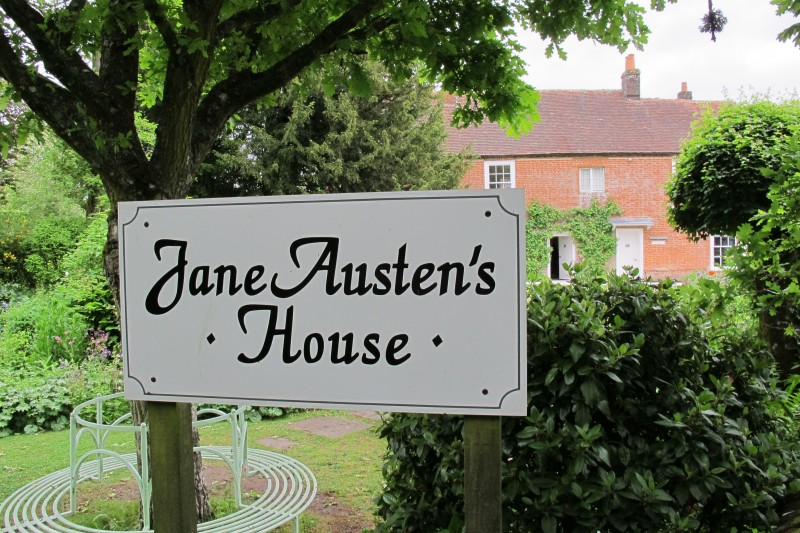