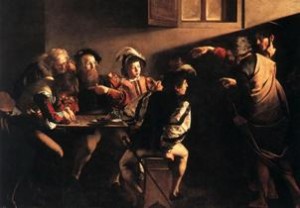 Michelangelo Merisi da Caravaggio, called Caravaggio for the name of the small town in northern Italy where he grew up, was known for his disdainful perspective of the conventions of his art. He was also known for being quarrelsome to the point of violence. He worked without assistants and unlike many of his contemporaries, he worked in a single medium – paint. When Caravaggio fled Rome as a fugitive, having murdered his opponent during a quarrel following a tennis match in 1606, he left behind a series of sublime paintings that still, after four hundred years, surprise viewers with acute intensity and immediacy of impact.

After being transfixed by the strength of one of his paintings at the Vatican museum one afternoon, I decide to plan the rest of my travels in Rome around his work. Caravaggio”s paintings are scattered in churches and collections all over the dense, multi-layered city. Searching them out, I knew, would draw me into different neighborhoods. Caravaggio would give me a thread to hold through the dense weave of Rome.

The Rome in which Caravaggio lived and worked was much smaller than it is today. Its population in 1600 was around 110,000; today it is approximately 3,000,000. In 1600 Michelangelo”s dome on St. Peter”s had been built, but the facade of the basilica and the colonnade which embraces the immense piazza would come later. The main piazzas, which organize one”s experience of Rome, already existed, but the straight avenues that cut through the tangled neighborhoods to link them were still emerging. The fascination with fountains, however, had already begun. Fountains lend a sense of play to the piazzas, making Rome a city where water and light form a counterpoint to the cold stone.

Three of Caravaggios most famous works, a series depicting the life of St. Matthew, are displayed in church near my hotel. In the early morning, after a cappuccino and roll at a cafe in the Piazza della Rotunda, I find my way down the Via Giustiniani to the Church of San Luigi dei Francesi.

The church is close to the Palazzo Madama, where Caravaggio lived in the home of his patron, a powerful cardinal. During the painters lifetime, the Catholic Church dominated Rome, and its beliefs determined the subject of paintings and sculpture. The stylistic preference was for elaborate, sumptuous work.

The St. Matthew paintings hang in a chapel at the far end of the church”s nave. In my favorite, The Call of St. Matthew, the subject sits at a table with several other men and a young boy. They are well-dressed, in luxuriant clothing from the Caravaggio”s era, not Biblical times. Two men in the group seem oblivious their surroundings because they”re engrossed in counting coins. The others are caught in the moment of surprise: two shadowy figures, in poor robes, have entered the room. One is listlessly pointing toward Matthew. The young man across from Matthew is reaching toward his sword, about to object, but the second stranger has raised his hand in warning. Jesus Christ, accompanied by St. Peter, is calling Matthew to work as an evangelist.

Matthew is at the center. One hand remains on the coins in front of him; the other points to his chest in surprise. The light in the painting illuminates most clearly the faces of Matthew and the young boy starting to protest.

The face of the boy is childishly full. It is clear that in the moment of the painting, he understands that Matthew is being called to leave the group – which the boy wants to defend. The summons is breaking up a small enclosed world. Matthew himself, no longer young, is caught unprepared. This call is unexpected and not particularly welcome.

In the three paintings in this chapel, as well as in many of his others, Caravaggio captures moments-in-time. Each moment is illuminated, but around it are shadows and darkness.

The painting itself, with its companions The Inspiration of St. Matthew and the The Martyrdom of St. Matthew, is cast in dim light. The church lighting is provided by candles and a few electric lamps. I can only take in the rich decor of the church, the elaborate carvings and paintings, the colors of the marble columns and floor, the intricacies of the altar pieces slowly. This aspect of visiting Roman churches was frustrating at first, considering my bad habit of scanning objects and quickly moving on. I observed art in a kind of mindless consumption of images, good or bad. I found, however, that in order to absorb my surroundings, I had to let my eyes work with the darkness and follow the details of color and shape as they emerged.

In the chapel there is an electric light on a meter, into which visitors can drop coins through a slot, turning on an overhead fixture that brightens Caravaggio”s paintings for a few minutes. This is certainly a concession of the twentieth century. The chapel is no darker now than it was when Caravaggio planned his work for the space. The experience in the sensuous, velvety darkness, immediately following the clear white brilliance of the Roman sky, was part of their plan.

A few steps from the church is Sant”Agostino, on the piazza of the same name, where another Caravaggio painting hangs.The serene facade Sant”Agostino belies the Rococco profusion within. Here, every surface is frescoed or hung with a painting. Columns and floor are marble – yellow, rose, black, white, gray, green – and gold gilt has been applied lavishly. Its too much, too flamboyant for my taste, but there aretreasures from earlier, more visually temperate periods here – almost hidden. On a pillar in the nave is a painting by Raphael, Isaiah the Prophet, completed in 1512. A statue by Jacopo Sansovino, Madonna of the Childbirth, also from the early sixteenth century, stands in a side chapel. The main altar was done by Bernini in the seventeenth century. But it is another canvas by Caravaggio, this one completed in 1604, which calmed me in its matter-of-fact, unsentimental appeal: The Madonna of Loreto.

Mary stands in a doorway with the young Christ upon her hip. Before her kneel two visitors, a workman and an elderly woman. They are poor; the workman is roughly dressed, his feet bare and dirty. Mary”s clothes are finer and richer, and she is young and beautiful in a salubrious way, rather than an ethereal way. The light illuminates her profile, throat and collarbone. Her hands, holding her son, are smooth and unlined, as are her feet – a stark contrast to the workman”s hands. Mary leans against the door frame with one leg slightly bent to carry the weight of the child who is already too big for her arms. Perhaps three or four years old, Christ”s legs beginning to lengthen, one hand is against his mother”s breast. He is undressed, and she is holding a white cloth loosely under him. The eye senses the weight of the child. There is a slight trace of impatience in the way the mother stands. The visitors have clasped their hands loosely in an attitude of prayer and the child reaches toward them with one arm. The gestures are part of the well-known vocabulary of spirituality. Or are they?

In this Caravaggio painting, as in so many of the others, the physical and spiritual seem fused in daily life. No one in this painting is abstracted by heavenly images; this is a particular mother on a particular day. Amid the richly worked surroundings of the church, the painting”s setting is plain. Bread and cheese on the table, for example. I have read that Caravaggio irritated church figures with this earthy, realistic approach to religious stories. This may be one reason he has become so popular in the 21st century: for his light grasp on religious dogma.

From the Piazza di Sant’Agostino, as the late spring sun gathers force, I walk down the Via della Scrofa to the Via di Ripetta, through a late Medieval and early Renaissance neighborhood filled with apartments, markets and palaces, past the Mausoleum of Augustus the Emperor – a walk of perhaps an hour. I linger along a stretch of elegant antique and clothing shops.

At the end of the Via di Ripetta, I stand on the edge of the Piazza del Popolo, looking across to the Porta del Popolo, the towering gate that marked the northern edge of the city in Caravaggio”s time. An immense civic space set with fountains and bordered by chic cafes and at least three churches, the square is closed to most automobiles; its a place to people watch. The square achieved its present dramatic shape after Caravaggio had fled from Rome, but Santa Maria del Popolo, which stands near the city gate,had already been built. Two more of his paintings hang there.

Many of the individuals who dominated the Renaissance and Baroque art worlds left their mark on this church: Bramante, the apse; Raphael, a statue and a chapel; Bernini, the same chapel; Pinturicchio, a fresco; Carracci, a painting; and Caravaggio. Marble inlays, mosaics, sculpture: architectural illusions. The church bursts with the energy of its contents. There”s no coherent interior design; rather, the nave, sanctuary, and chapels are like heaped jewelry boxes. I began to appreciate the fact that many of the works, here and throughout Rome, sometimes express the craftsman”s sheer delight in material goods like paint, stone, plaster and water. I remind myself that when they filled these churches with rich materials worked to such elaborate fineness, the world was much less crowded with objects, images and than it is now.

But Caravaggio’s style differed from that of the other artists and craftsmen who worked here. As with the other works that I comtemplated that morning, I find The Crucifixion of St. Peter and The Conversion of St. Paul immediate and fresh. In the crucifixion scene there is no sentimentality to the martyrdom; the painter didn”t flinch  from portraying the dirt and sheer physical work involved in the execution of the old man. In the painting of St. Paul, the saint is threatened both by his divine summons and by his frightened horse. The animal competes with its fallen rider to dominate the scene. Paul, transfixed by the light from above, lay very close to the excited animal”s heavy hooves.

It”s past noon, nearly time for the churches of Rome to  lock their doors for the siesta. My feet, legs, and eyes are tired. It”s time to find a cafe for a light lunch, after which I would find another route back to my hotel – down the Via del Corso, perhaps, to rest and reflect for a couple hours before setting out again.

The Caravaggio works scattered around the city in the churches I visited that morning, and in the Borghese Gallery, in the Museo National dArte, on the Campidoglio, and in the Vatican museums, have a directness that can act as a criticism of the lavishness that often surrounds them. Caravaggio apparently failed to fit easily into his own world. He wasn”t interested in the grandiose, but Rome appreciated, absorbed and preserved him neverthetheless. Following the thread of his paintings refined my perception of his work and its surroundings in the continuity of Rome. 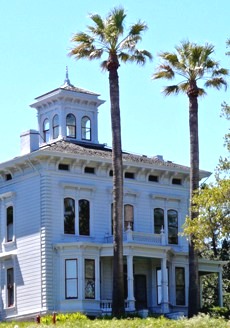 John Muir and the Family Ranch in Martinez 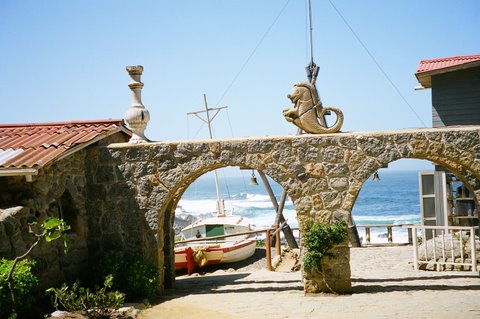