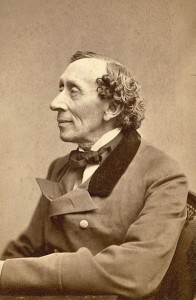 Hans Christian Andersen is probably the most famous Dane in literary history, but his rise from poor, ambitious shoemaker’s son to lauded, internationally renowned author was a troubled one. Even today people are still trying to unearth the real Andersen.

To truly understand this man, one must travel back to Odense, Denmark in the year 1805. On April 2 of this year, Hans Christian Andersen was born to parents who had been married for two months and who did not live together until nine months after his birth. He had half-siblings born out of wedlock, an aunt who ran a brothel, and a maternal grandmother who had been imprisoned for giving birth out of wedlock. His paternal grandfather, known to the town’s children as Crazy Anders, made Andersen fear that the old man’s mentally deranged state would someday be passed on to the boy.

At the age of seven, Andersen had his first encounters with the theatre in Odense. Once, after seeing a German opera, Andersen came home and began to reenact the scenes, making up his own gibberish-German language. All of these scenes did however frighten my mother, he later wrote, she forbade me to carry on like that, believing I must be mad. In 1818, his mother remarried (two years after the death of his father), and the tiny home in Odense quickly became too small a stage for Andersen’s ambition. Then, at the age of fourteen, Hans Christian Andersen moved to Copenhagen. From this point on, he struggled in his attempts to overcome his poor social standing and to insinuate himself into upper class society. This goal was not easily accomplished, and his attempts to earn a living as an artist, actor, singer, and dancer, were not met with grand success. Thus, over the next several years, though he was treated kindly by some members of high society, his quality of life still reflected his underprivileged beginnings. Johan de Mylius’ research shows that at the home in which Andersen resided in 1821, Only breakfast and an evening meal consisting of a set number of open sandwiches [were] included in the board. At noon he had only a piece of dry bread, which he would eat while sitting on a bench in the park Kongens Have. Otherwise he would roam the streets half-frozen.

Fortunately, Hans Christian Andersen’s talents as a writer began to pay off shortly thereafter, when a director for the Royal Theatre read one of the boy’s plays and had Andersen schooled and tutored with the king’s money, and by 1828, Andersen was attending the university in Copenhagen. 1831 marked the year that Andersen became a traveler. He visited Germany on his first journey (eventually there would be thirty such journeys, in all) beyond the borders of Denmark and found the experience so moving that he wrote a travel journal, which was also published that year. Andersen fell in love with traveling so much that, back home in 1833, he wrote in a letter to a friend, I am convinced that unless I am torn away from my momentary surroundings, I will amount to nothing; I shall perish if I remain here! A month later, the king came to the young writer’s rescue again and provided him with a travel grant from public funds. For two years, he journeyed to Germany, France, Switzerland, and Italy. (In his travels, Andersen always brought with him a rope that he could use as a makeshift fire escape because he was perilously afraid of fire.)

In 1835, surprised that the Danish children had begun to sing his musical poems, Hans Christian Andersen published Fairy Tales for Children, a collection of four tales that he had written for a little girl he knew. Over the years, he continued to publish fairy tale collections, autobiographies, and travel sketches, and he continued to travel all across Europe, accepting invitations from fellow writers such as Charles Dickens, as well as from kings of such countries as Sweden and Prussia, often receiving honors from them. Indeed, Andersen had made quite a name for himself. Once, in 1854, as the honored guest of King Maximilian II of Bavaria–known simply as King Max to Andersen–he wrote a letter to a friend describing a carriage ride that he had taken alone with the monarch. It was so lovely, and the King, who had read Das Marchen meines Lebens[an 1847 autobiography], spoke much of my childhood, my development and the various people with whom I had consorted. He was so understanding, and to me myself it was like a chapter in a fairy tale that I, the poor shoemaker’s son, was traversing the mountains by the side of a king. Indeed, Europe loved Hans Christian Andersen, but what about Denmark?

Andersen always felt that due to the rigid class structure in his own country, his lowly birth would never permit the Danes to appreciate his work and his status the way that foreigners did. Finally, in 1855, eight years after the German version and the English translation of his autobiography, Andersen set out to publish a Danish version, entitled Mit Lives Eventyr, or The Fairy Tale of My Life. Johan de Mylius writes, The remarkable thing is that this definitive version of his autobiography, written at the height of his writing career, is the one that betrays the greatest human insecurity. It is one long self-defense, a demonstration with testimonial after testimonial of his abilities and merits. . . . And why should this be? Because Andersen intended it for his Danish public, where it was only a few years before the publication of Mit Livs Eventyr that the critics had begun to acknowledge him with fewer reservations, in a manner in keeping with the reception he had been given abroad.

Having proved himself to Denmark, Hans Christian Andersen continued his travels outside of it, going to destinations such as Spain, Morocco, Portugal, Amsterdam, Holland, Norway, Austria, and always often to Germany, Italy, and Switzerland–which, in 1873, marked his final journey abroad before returning to Copenhagen. There is a famous story about Hans
Christian Andersen that occurred in 1875, the year of his death. The Danish people, to show their affection and esteem for their most famous son, initiated plans to build a statue of Andersen in Copenhagen’s Rosenborg Garden. Sculptor A. V. Saabye created a design that appalled Andersen. It was to be a statue of the old man reading from one of his books to little Danish children sitting on his lap. Andersen, disgusted by the tall boy who is draped all the way up my leg filed an official complaint, saying that neither [Saabye] nor any of the other sculptors knew me, had not seen me read, and that I could not abide people standing behind me and did not have children on my back, lap or leg; that my fairy-tales were just as much for adults as for children, who only understood the ornamental trappings, but only as mature adults can they see and perceive the contents.

Many find this story to be quite characteristic of Hans Christian Andersen. This was a man who was often lonely throughout his life, having left home at the young age of fourteen, having always felt like an ugly duckling, having proposed to several women and having always been refused, having felt that his amazing talents were dismissed by his own homeland, having achieved fame as a writer for children while he always wanted to be and considered himself to be a writer for adults. . . . and yet, Hans Christian Andersen is still a powerful figure in the world of literature. He died of cancer of the liver in 1875, and his funeral was held at the cathedral in Copenhagen in the presence of the king. In his will, he left everything to his friends and their progeny, but declared that in the event that there are no more recipients within this circle, the money is to be transferred to the local authorities in Copenhagen and be distributed to poor Danish poets or musicians.

Today in Copenhagen, a bronze statue of Hans Christian Andersen stands in Rosenborg Garden. The statue portrays a cloaked man, sitting in a chair, arm outstretched, reading eagerly to an invisible audience. Elsewhere in Copenhagen, Andersen lies buried under a granite stone bearing words from one of his poems:

The soul which in God’s own image is made,
Eternal is can never fade
Eternity’s seed in our life doth lie
The body may fall, the soul can not die.

Being buried alive was one of Andersen’s greatest fears. The Hans Christian Andersen 2005 project tells us that because of this fear, the great writer always left by his bed a note which read, I am only apparently dead. Given the immortality that Andersen has achieved through his life and works, I would venture to say that he was correct.

Lucy Maud Montgomery An Island Tribute to a Great Writer