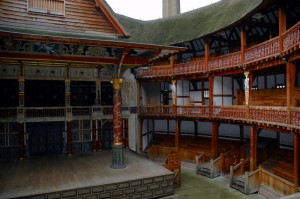 By Michael Hartigan (From the Literary Traveler Archive)

I am not an original Groundling. Nor could I ever be, what with widespread theatrical ambivalence, modern day health codes and a personal dislike for sloshing through human waste.

However, had I been a child of the 60s (the 1560s), I might’ve felt right at home on the wrong side of the Thames, amongst the bawdy bards and applauding proletariat. Right there, on the floor, standing room only at Shakespeare’s Globe, ankle deep in mud, stale ale and whatever that steaming liquid over there in the corner might be – reveling in revelry with a raucous reaction to sword fights and swooning ladies (well, men dressed like ladies) all the same.

These are the cheap seats, the Elizabethan equivalent of the Wrigley bleachers during a mid-summer weekend day game – with more beer. Here on the theater’s ground, directly in front of the stage, apprentices skipped out on their masters to pack the floor and interact with the actors. They were loud, rambunctious and if their nickname, “stinkards,” doesn’t describe them fully enough for you, just know that a trip to the loo meant aiming in between your shoes.

But what the cheap seats during Elizabethan times lacked in hygiene (and they lacked a lot, including any actual seats or any actual hygiene), they made up for in sheer entertainment value. You were part of the production. The sweat on Shylock’s brow as Portia argues his punishment must have dropped right at your poorly shod feet.

True, to stand at the foot of the stage meant to be in prime trampling range should an errant spark find its way onto the thatched roof. But the play was the thing, ensnaring the attention of everyone from commoner to king. For what equaled out to ten percent of your day’s pay, a bit of entertainment was worth the risk and the aroma, which may have been just as deadly.

The Shakespeare’s Globe Theatre you visit in London, England, today is a reconstruction. The original, lost to fire like most of London at one point or another, was located nearby the site of its modern day doppelganger. Like my ability to be a true groundling, the modern Globe is not, nor could it ever be an original. But barring a trip to Stratford-Upon-Avon, it provides one of the area’s best Shakespeare-o-phile indulgences.

With its open-air theater style, the play season does not start until mid-April. I visited too early in the year to enjoy a show, settling for a guided tour. Clad in scarf and fingerless gloves, our guide led us around the balcony, through the corridors and out onto the floor, all the while his voice fully ingrained in gravitas, doing his best to fill the void where the play should be.

The history was fascinating, as were the tidbits about royalty’s penchant for sitting onstage and other behind the scenes Elizabethan gossip. Standing in the dirt at the foot of the stage, the groundling experience could be imagined, if not fully realized.

Although an exact replica of the original, the modern builders did made a point to include indoor plumbing in this century’s Globe Theater. A knock to the philosophy of the original groundlings, but nonetheless mandated by building codes and common decency. I broke away from the crowd to find one of these little bard’s rooms and returned henceforth to find the group seated on wooden benches in another staging area near the gift shop (another modern addition).

As I descended the stairway into the waiting area the small crowd all turned to stare–all save my wife, who was standing in front of everyone  like a frightened actress. My wife was accompanied by a young woman, an older gentleman and two racks of traditional Elizabethan garb, including dresses, surcoats and vibrant doublets, white leggings and an assortment of hats hung, trembling in wait.

I cursed not so subtly under my breath. There was an ambush coming, scheming to dress me up and parade my be-knickered arse in front of international tourists. Why did I open my big mouth and ask the tour guide a question?

With every step toward the group I tried to convince myself it would be fun. I could pull off tights and a feathered cap, right? Maybe they’d give me a sword. That would make it swashbuckling and masculine, right?

As I did my best to hide my oncoming embarrassment, my wife’s face turned as red as the deep scarlet dress hanging behind her–turns out I was not the star of this show.

She flicked her hand timidly, as if shooing away a fly, toward one of the benches right up front. The groundling section.

The young woman announced she and the older gentleman would be dressing my wife up in the traditional clothing of Ophelia, an Elizabethan royal (albeit Hamlet wasn’t British but they wore the British clothes on the stage. You get the idea). It was not the marquee production but as a matinee, this had the makings of a hit.

In the cheapest of seats with the closest of views, I witnessed a transformation from embarrassed modern woman to embarrassed Elizabethan era British lady. She donned a white linen undergarment that looked more bedsheet than bra. The corset came next, laced up fully in the back until everything in front was elevated, squeezed and popping. To make her rear more ample, they inserted a “bump.” Elizabethans liked a little junk in their trunks and the crescent pillow gave all the inflation one could ask for. They finished the beautiful crimson dress with an ivory jacket, laden with jewels and delicate stitching. And topped it all off with a bonnet.

Perhaps I should’ve been more true to the groundling form and heckled her–also, a pint of ale would have been welcomed– but something wholly Shakespearian clamped my voice. My wife sacrificed some of her dignity and probably a few pounds by dressing up in hot, heavy and heaving period attire at the Globe, and I appreciated it.

For all their tomfoolery and mudslinging – literal and figurative – the groundlings understood undertone. Shakespeare wrote for the people; even when he was writing for royalty he include the subtle commoner lingo usually reserved for farmers and flock herds. Billy and his minions would’ve appreciated this scene, for all its skewering of humility, tugging of romantic souls, ironic reversal of perceived roles and just plain comedic value. (She did look like a serving wench.)

So while I didn’t get the full groundling experience–no play, no mud, no free-flowing insults, ale or urine–I thoroughly enjoyed the show.

For more information on Michael Hartigan’s groundling experience, read Literary Traveler’s accompanying interview with the author and take a look “behind the article.”

THE PITY OF WAR: English Poets of WWI

2015 Holiday Gift Guide: 10 Affordable Items for the Literary Traveler in Your Life