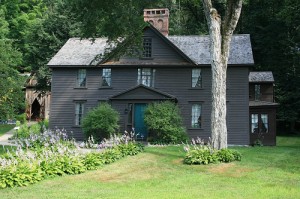 The New England landscape and communities that Louisa May Alcott both cherished and used as inspiration for her writing have changed drastically in the intervening years. Today, two museums remain dedicated to exploring and explaining the lives of the Alcott family: The Fruitlands and Orchard House. Both museums bring to the forefront of their mission Louisa May’s sensibility towards nature and society as they strive to remain relevant to American society.

On June 1, 1843, Bronson Alcott moved his young and growing family into the Fruitlands farmhouse in the town of Harvard, Massachusetts. The Fruitlands experience was an experiment by Bronson Alcott to put his philosophical beliefs regarding community, family, and the individual into action. This was a test of the practical implications of Transcendentalism. Alcott’s main partner was a man named Charles Lane, an admirer of Alcott”s who left England to form the commune. In total, there were about 20 people living in this utopian community, which was dedicated to shared labor, the prohibition of animal products (and labor), and abolitionism. At its height, the consociate family (the term its members applied to themselves) received visits from such notables as Ralph Waldo Emerson, who was a close friend of the Alcotts and George Ripley, one of the participants of the Brook Farm community.

The community did not last long. The constant travel by Alcott and Lane, who were off expounding their views to others around the region, strained the working conditions on the farm. Furthermore, Lane was pressuring Alcott to dissolve ties with Alcott’s family, which Lane felt was an impediment to achieving true transcendentalism. By January 1844, the Fruitlands utopia had failed, the Alcotts had left the farmhouse (on the urging of Mrs. Alcott, after her husband went into a deep depression) and Charles Lane had joined Harvard’s nearby Shaker community. Years later, Louisa May Alcott, who was ten years old during her tenure at Fruitlands, would present the world with a fictionalized version of this tale, in the form of the story Transcendental Wild Oats.

Since 1914, the Fruitlands museum in Harvard has been telling this story, along with that of the town’s sizable Shaker community. The museum complex also contains an exhibit dedicated to the region’s Native American population (recently refurbished) and an art gallery that contains numerous paintings from the early American Hudson River School. The museum was the brainchild of Clara Endicott Sears, on whose property the complex rests. Legend has it that she was looking down from the window of her summerhouse, called the Pergolis, when she saw a rundown farmhouse near her land. Purchasing the property in 1912, she discovered its famous antecedents, fixed it up, and opened it to the public in 1914. The Shaker house and the other two exhibits were added later.

Recently, Fruitlands has expanded its mission as an educational institution, choosing to take advantage of its spectacular location at Prospect Hill in Harvard. In dedicating itself to becoming the “Museum of the New England landscape,” the complex promises to give its visitors a view of New England in terms of both cultural and natural transformation. According to the museum, “Fruitlands is currently developing a series of landscapes that show how humankind has shaped the land over the past 5000 years. Archaeologists are excavating a garrison house and subsistence farm used by European settlers from 1710-1852; museum staff is recreating Native American land management practices, such as seasonal burnings and other hunting and gathering customs.” Thus, visitors will be able to walk the trails on Fruitlands grounds and see the landscape of the region throughout a variety of time periods.

Although well known to Louisa May Alcott scholars, Fruitlands often is overlooked as an important part of the life of the celebrated 19th century author. The attention is given mostly to the Orchard House in Concord, where Louisa wrote her classic Little Women, and the other “domestic” novels that brought her fame and wealth. But Fruitlands’ importance to her family, and to the philosophical development of American society, should not be underestimated. There are those who argue that it is the episode at Fruitlands that shifted the power in the Alcott family from her father to her mother, which thus impacted young Louisa and her writing. Furthermore, as a transcendental experiment, one that had some pretty powerful philosophical backers, the community’s failure surely influenced those who believed that Americans could create a different, American way of communal living, separate from Europe”s hierarchy and one that could rely on its individual members to live morally and prosper.

The Orchard House in Concord, Massachusetts, long identified with Little Women, also must balance the demands of current society with the message of the Alcott family. In the case of the Orchard House, it has learned to deal with the conditions of success, which have brought some stress to the structure, as well as the neighborhood.

The Alcott family moved to the Orchard House in 1858, after living in a variety of locations throughout the town of Concord. As on previous occasions, neighbor Ralph Waldo Emerson assisted the family in the purchase of the house. The family lived at the home until 1877, when it moved to another location near the center of Concord. It is here in this house where Louisa wrote Little Women, as well as Little Men, Old Fashioned Girl and Good Wives.

The Alcotts sold the property to a protg of Bronson Alcott, William Torrey Harris, an early U.S. Commissioner of Education. Importantly, he preserved many of the artifacts in the house. Thus, seventy-five to eighty percent of the objects in the house now were originally owned by the Alcott family. In 1910, The Louisa May Alcott Memorial Association purchased the property and the Orchard House has operated as a museum continuously since 1911. Attendance at the museum reached its peak after the 1994 Christmas opening of the latest theatrical version of Little Women. In 1995, the museum received 55,000 visitors, although that figure has dropped off in recent years.

The mission of Orchard House is to explore and present information about all of the members of the Alcott family, not just Louisa. Thus, Bronson Alcott’s School of Philosophy is preserved for those who are interested in his lifelong crusade for educational betterment. But while Bronson Alcott”s contributions to American philosophy have been well examined by academics and preservationists alike, it is perhaps the museum’s interest in May Alcott which is most surprising and intriguing. May, the youngest daughter, was a talented artist whose drawings can be seen still on the walls of the old house. The Orchard House possesses May’s 1877 Still Life painting which hung in the Paris Salon. That year, May was the only American woman to exhibit in the salon, beating out such notables as Mary Cassatt. The museum is working with the European descendants of May Alcott”s daughter, Lulu, to mount an exhibition of May’s paintings at the Orchard House.

Recently, the Orchard House had the honor of being chosen as an “Official Project” of the “Save America”s Treasures” program. Established by President and Mrs. Clinton as part of the National Millennium Commemoration, this program seeks to protect and to preserve threatened cultural sites and institutions that are important to the history of the nation. The designation gives the museum the opportunity to apply for grant funding to continue its preservation efforts. This opportunity is in addition to the other fundraising efforts the museum makes on behalf of preservation, which include a holiday decorated house tour of historic homes in Concord. It also coincides with the celebrations the museum plans to have in honor of Bronson Alcott’s 200th birthday.

The museum has achieved international significance, receiving enthusiastic visitors from as far away from Japan (where Little Women is often taught as an exemplar of 19th century American home life), but its renown has put some unfortunate physical stress on the structure, which has extended to putting emotional stress on the surrounding neighborhood. The museum recently purchased a house across the street from the Orchard House in order to increase office space, and to get the heavy office equipment out of the centuries old structure. Rumors that there were to be educational programs and expanded business at this site prompted the concerns of some Lexington Road residents that the museum was trying to expand commercially. The Orchard House has worked with the residents to address those concerns. Thus, according to Maria Powers, spokesperson for the museum, that site will not be used for any public purpose, but simply will provide more office space to the Orchard House staff.

Both Fruitlands and the Orchard House hold unique positions in understanding the development of American history. While ostensibly dedicated to retelling the exploits of the Alcott family, because of that family’s significance to American history, literature and culture, they are more than just charming farmhouses that explain life in the 19th century. Furthermore, the museum’s early establishment in the preservation movement gives us insight into the difficulties and rewards many museums face in remaining both topical and faithful to their subjects. As autumn approaches, it is worth it to take a ride through the typical New England towns of Harvard and Concord to understand more about the Alcotts’ important place in New England and New England’s influential position in American history.

More on the Web
Louisa May Alcott