Friends and family met my decision to travel to Vermont from Manhattan with various degrees of incredulity.

‘How can you stand the idea of being in a train for 9 hours?’

‘Do you know that driving only takes five hours?’

Eighteen months of life in pandemic conditions had stirred a wanderlust within me. I’d always fantasized about seeing the barren landscape of the Silk Route through a train window. For now, I had to make due with traveling through mundane New England. For inspiration, I downloaded Paul Theroux’s The Great Railway Bazaar on my Kindle. Theroux is one of the twentieth century’s most prolific travel writers. In 1973, the year of my birth, he set out by train across all of Europe and Asia. The last time I traveled by train long-distance was thirty years ago. Those days, I wasn’t into rolling landscapes. But after being cooped up in an apartment for months, my eyes thirsted for new sights. So, I trundled off with two rolling suitcases to New York City’s spanking new Moynihan Hall. I boarded The Vermonter (my train’s name) and settled into a plush seat. In his novel, Paul Theroux is quick to compare the merits of different modes of transport. ‘Nothing is expected of the train passenger,’ he says. ‘While planes condemn travelers to hours in a tight seat; ships require high spirits and sociability; cars and buses are unspeakable. The sleeping car is the most painless form of travel.’

My train left New York City and entered a long tunnel. Paul Theroux begins his book as he is leaving London. The brick terraces, coal yards and narrow back gardens of South London he describes are probably as dull as the office parks and nondescript housing of Connecticut’s commuter neighborhoods. In Paris, he steps on the Orient Express. It will halt in Lausanne, Milan, Trieste, Zagreb, Belgrade, and Sofia. At this early juncture, Ceylon’s rosy heat is Theroux’s motivating factor. Mine would be Vermont’s crisp mountain air and freshly churned ice-cream. Theroux’s first impression of the Turkish Steppes leaves him nonplussed—he mentions packs of stray dogs and dusty, brown hills. I passed the first attractive scenery of my journey—the Stamford Harbor and its pristine sailboats. Meanwhile, Theroux has reached Istanbul and is admiring caiques on the Bosporus. 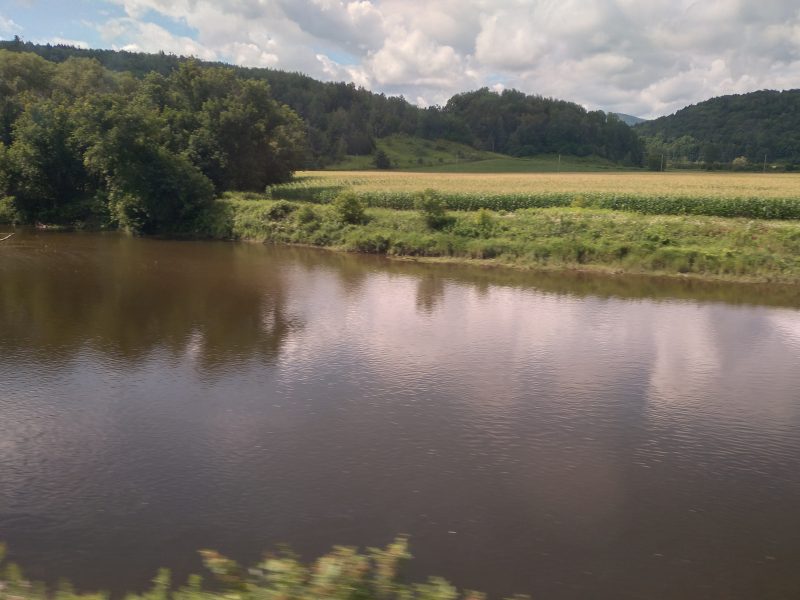 Unlike Theroux, who befriended many interesting characters on his journey, my socially-distanced compartment allowed for no interaction with other human beings. Among his fellow travelers are an Englishman formerly with the Indian Army, gags of Japanese, Germanic tribes, and hippies on their way to India. Most of the latter are teenage girls fleeing their parents; their photographs, Theroux is sure plastered on the walls of American consulates between London and Delhi. Every generation deals with its own issues, parents fleeing children, children fleeing their parents. Theroux’s journey itself is one of self-indulgence—one of travel for its own sake. Stamford’s next offering to me is an ugly power grid. Theroux dismisses Turkey’s mountains as brown and parched like an over-baked pie crust.

The Vermonter slows down at Bridgeport and remains suspended over a body of greenish-brown water. My first glimpse of wildlife—bobbing ducks. Theroux has learned the word baksheesh—in the three thousand miles from Turkey to India (it means ‘a tip’). His fellow passenger, a Turk, foresees the end of the hippie movement. Their shortcoming being tightfistedness and being unable to understand baksheesh. My train gathers speed, passing woods, an office building with a shiny front, and a white-spire church. Theroux is on the Night Mail bound for the holy city of Meshed. It is full of pilgrims who spend their journey in various postures of devotion. As the pressure of prayer builds, the train’s carriages vibrate with its passenger’s zeal. Guilt overcomes me at missing my own prayers—the thought of performing them on a moving train hasn’t occurred to me. I am still doing better than Theroux, who hasn’t showered for five days.

Theroux nears Afghanistan. Its king, Zahir Shah, has been deposed while enjoying a holiday in Italy. Now Theroux’s compartment is sans electricity and water. I am in New Haven where the Vermonter switches engines—sans electricity. Touché Paul. In 1973, when Theroux embarked on this journey, cross-continental travel was not for the faint of heart. Other than the physical hardships of erratic food supply and questionable sanitation; credit cards, mobile phones, and GPS did not exist. After a hot and stifling half hour, The Vermonter moves again. The scenery remains lackluster—industrial waste, then a marsh housing the occasional brown duck. Theroux’s journey has brightened. He is on the Khyber Mail bound for Peshawar. His compartment has a toilet sink, drop-leaf table, well-upholstered seat, mirror, and ashtray. I do hope he took the time to bathe. I am in the town of Meridien. It has a large lake with pretty waterfront homes. The trees are homogenous. Theroux is on the Kalka Mail. Its meat-grinder cogs have lulled him to sleep. Hippies have found their way to Simla in their droves. A persistent ashram owner attempts to induct Theroux by saying, ‘If you believed in yoga, you would not have to worry about catching trains.’

To which Theroux replies. ‘That is why I do not believe in yoga.’

It has taken me three and a half hours to reach open farmland. I pass Springfield, Massachusetts. Theroux is on the Grand Trunk Express. When he tells people of his dream to travel to Ceylon by train, they laugh. The Vermonter stops at an old-fashioned Railway Crossing. The kind where cars stop behind a white fence to allow a train to pass. At long last. I spot a bubbling stream, wild daisies, rolling hills and dense woods. Theroux travels the Palk Straits by steamer. Obviously, no train tracks link India to Ceylon. In Galle, Theroux admires a sunset that patterns the sky in a rufous gold.

When The Vermonter leaves Massachusetts to enter Vermont, the landscape is striking all at once. I switch off my Kindle and pack it in my handbag. My train is traveling parallel to lakes surrounded by mountains on three sides. The water reflects the mountains, clouds, and trees as clearly as a looking glass. Between lakes are chestnut-colored horses galloping within enclosures. A week before my arrival, on the 19th of July, Amtrak started its service to Vermont for the first time since March 2020. Celebrations took place at train stations throughout the state. Locals gathered to cheer the train in. Local restaurant owners handed out free coffees and donuts. I returned to The Great Railway Bazar on my return journey. Theroux returns to India and proceeds to Burma, Singapore, and Japan before heading back to London via Russia. On the platform of Essex Junction, my brother, his wife, and my canine nephews are waiting to greet me. The first thing my brother says to me is: You certainly can’t travel light.

Zeenath Khan lives in Mumbai, India. She is a freelance writer and aspiring historical novelist. Over the pandemic, she pursued a novel-writing course and discovered the joy of reading books written by renowned twentieth-century authors. Alongside working on her novel, she writes articles on history, culture, religion, and topics of social interest. Travel writing is a new foray for her. But it’s an area she would like to pursue as countries open their borders once again. 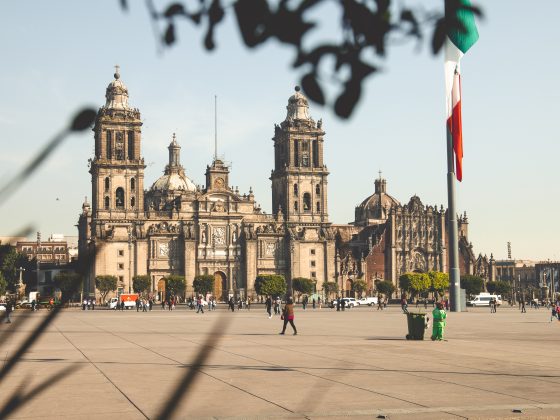