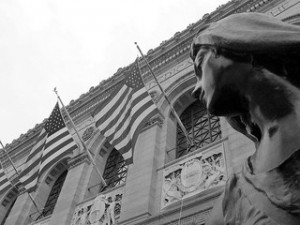 The bleary-eyed rabbit wrapped her paws around a coffee mug for warmth. Although we were indoors, the chill of a Bostonian spring seeped through the walls.

“Some night last night,” she said, flicking her ears for emphasis.

“Yep,” I replied, “Some night indeed.” I took a long drink from my own mug and leaned against the counter. Unthinkingly I began to scratch my back up against it, moving up and down, up and down.

“You’re shedding,” the rabbit said. I looked down and sure enough, black fur was floating to the floor from my backside. I sighed as I lumbered to the broom closet and retrieved the vacuum.

The previous night I had arrived in Boston with a backpack full of Richard Scarry books and an address. I’d worked a full day at my 9 to 5 then hopped on a plane and attempted to navigate my way to a stranger’s house in a city I had never seen before. My host was a young woman, the same age as I, who I had met online through couchsurfing.org.

Perhaps being in Scarry’s hometown was getting to me, or maybe it was exhaustion, but I soon began seeing the people around me as the animal caricatures in his books. I rubbed my eyes and blinked a few times. The old woman sitting next to me on the bus turned into a hedgehog with a purse. As I hopped onto the sidewalk at my stop, a group of young men in polo shirts became mallards, quacking loudly as they entered a bar.

My own skin began to tingle and I felt my body swell and rearrange. My nose lengthened into a muzzle and my ears shifted up the sides of my head. I felt like the man from The Origin of Species drawing in which an ape progresses into a homo-sapien over the course of a few steps, but I was moving in reverse and felt quite a lot larger than an ape. I decided to play along with the fantasy and continued walking. When I reached the door of my destination, I extended a long, yellow bear claw to ring the bell.

The difference between Scarry’s world and mine was quite obvious. His beasts were in a perpetual state of happiness, bordering on medicated, whilst I dragged my weary paws low. The Best, Longest, Busiest, [most] Giant Book Ever! Richard Scarry’s titles generally contain a combination of such superlatives. I wished that I could muster the same enthusiasm for life, but I felt as though I was like most creatures on this planet – more or less complacent and going about life with fluctuating levels of contentment and misery.

Scarry led a fortunate life, which undoubtedly contributed to the fiercely optimistic utopia in his children’s books. His family owned a small chain of department stores that allowed them to live comfortably throughout the Great Depression. When drafted for World War II, he worked as a cartographer in Northern Africa instead of on the front lines. He moved to New York City and beat the odds to become a successful illustrator, then met the woman of his dreams, a writer, who helped him become an author. He sold millions of books, moved to the Swiss Alps, and left a legacy of wealth to his son and socialite-artist granddaughters when he passed at the age of 74. An enviable existence, no doubt.

My focus turned to the doorstep on which I stood. The padding of soft feet echoed from within, and the door opened to reveal a smiling white rabbit. Amazingly, my host did not run in fear from my massive bear form, but welcomed me inside, asking if I liked curry.

“Absolutely!” I replied. “The spicier the better.”

“Oh, but it’s vegetarian. I hope that’s alright,” she said, taking in my carnivorous attributes.

I thanked my lucky stars that I wasn’t a grizzly bear and said, “You know us black bears. We’ll eat whatever garbage we can find!”

She laughed and led me into the dining room, where a tabby cat and two chickadees sat around a table drinking cans of beer. The birds fluttered from their seats and introduced themselves. They were both visiting from the Ukraine, but currently worked as au pairs for twin piglets in New York City. They were staying with a billy goat, who popped his head out of the kitchen to say hello. The tabby smirked wryly and handed me a beer.

Shortly thereafter the rabbit’s boyfriend, a timber wolf, arrived along with his friend, a raccoon. We gobbled down our food and cracked jokes about fur balls and furry balls for hours – playing a few rounds of cards along the way. At around 2:00AM, the wolf nodded off in his chair with a string of drool dangling from his lip. The tabby had disappeared, as had the birds and the billy goat. I looked at the raccoon and the rabbit and decided it was time for a brief hibernation. What, I wondered, would Mr. Scarry think if he caught his critters drinking and gambling like this?

The next morning, after sweeping my fur off the kitchen floor, I accompanied the goat and the chicks on a day of sightseeing. We went on a tour of Harvard University and the Boston Public Library. Later we rode a painfully slow elevator to the 52nd floor of the Prudential Tower and walked around the Skywalk. It was clear, crisp day and I could see for miles. Busytown indeed, I though as I gazed down upon the rows of brownstones, buildings, and milling bodies.

I departed early to take a brief adventure on my own. I was hoping to cross paths with someone or something that would inspire me and lead me to Scarry, but I had only a weekend and time was getting scarce. I was rumbling down the sidewalk on my stout bear legs – feeling the first twinge of worry – when I spotted a 50% off coupon for a psychic reading flattened to the pavement. I had never had my fortune told before. I followed the little map on the corner of the flyer and found myself across the street from a cemetery, staring up at a brick building.

I took the elevator to the 6th floor and was surprised to pass mostly law offices. At the end of the hall voices echoed from a propped open door. The room was dark and cramped, with four or five psychics claiming corners behind Japanese Shoji screens. A bloodhound in a turban pointed me to the far-left corner, where an aging turtle sat. I cautiously approached the turtle and sat down across from him. He wore a violet shirt with the top button undone and peace sign necklace. Before he could introduce himself, he sneezed loudly into a hanky.

“Excuse me, my friend,” he said. “I am suffering from a terrible cold.” He wiped his beak and buried the hanky in a drawer.

“Now, what is your birthday?” He asked.

“Ah, my Aries friend. What brings you here today?”

“This is my first psychic reading,” I said. I didn’t want to tell him that my curiosity had gotten the best of me, so instead I began rambling about my trivial life issues – career, relationships, uncontrollable cravings for honey, etc. All the while, the turtle rubbed his flat hooves on some crystals and closed his eyes.

“I see that you are very restless…Typical Aries. You love to travel, don’t you?”

“Is there anywhere in particular that you would like to go?”

“I think Brazil,” I said, but he began shaking his head fiercely so I changed my answer.

“I am really feeling Southeast Asia,” he said. “I see you visiting the temples as a lone traveler.” He went on and on about temples and green mountains.

I had intended to ask him about Richard Scarry – if he had any special “feelings” that might help to guide the rest of my weekend in Boston, but before I had a chance he said, “Alrighty, then. We are out of time, my friend.”And nudged a sign that read, Please tip your psychic.

Feeling disheartened, I began wandering aimlessly, just another bumbling animal in Busytown. I contemplated Southeast Asia with some seriousness. I had been packing every last second of my schedule to make sure I wasn’t wasting a single moment, but my many varied interests were starting to weigh on me. I felt scattered and disappointed. Why hadn’t I asked about Scarry?

I eventually found myself back at the rabbit’s house, where the chickadees were cooking borscht. The night started off much like the one before. The billy goat took the birds home fairly early in the night, leaving me, the rabbit, the wolf, the tabby, and the raccoon. The rabbit suggested a game of “slapbag” to spice up the night, a completely foreign concept to me.

It consisted of taking boxed wine, removing the box, and tossing the bag of wine amongst the players. A category is chosen, and the player who catches the bag must list a previously unsaid item within that category. If successful, they throw the bag to another player. If not, the player must drink from the bag of wine while another player slaps it – potentially causing it to spray in the drinkers face. This went on for a while, until I accidentally slashed open the bag of wine with my large claws.

We began dancing around the living room to 80’s power ballads and a sense of freedom and elation came over me. The situation was so ludicrous that I couldn’t help but laugh. I felt light, liberated, and young. Was it the cheap wine or was it something more? I thought it was more the joy of making a huge mess, just like a child, and then playing in it. This is what it’s supposed to feel like to be a Richard Scarry animal, I thought.

The next morning our menagerie of furry creatures huddled around mugs of coffee once more. The feline’s smirk was more pronounced than usual as she stirred the contents of her cup – like she had a secret joke that she wasn’t sure anyone else would think was funny.

I needed to get to the airport, so we piled into the wolf’s powder blue car and cruised through the city for a final look. Along the way, I felt myself shrinking back into my comfortable female form as I gazed out the window at the people passing by. I glanced around the car at my four new friends. I wasn’t sure if I had found what I was looking for in Boston, but I was glad I had found them.

Is life but a lovely fable? I wondered. I began to scoff at myself, but then, as if it were whispered in my ear, “It all depends on how you see it.” 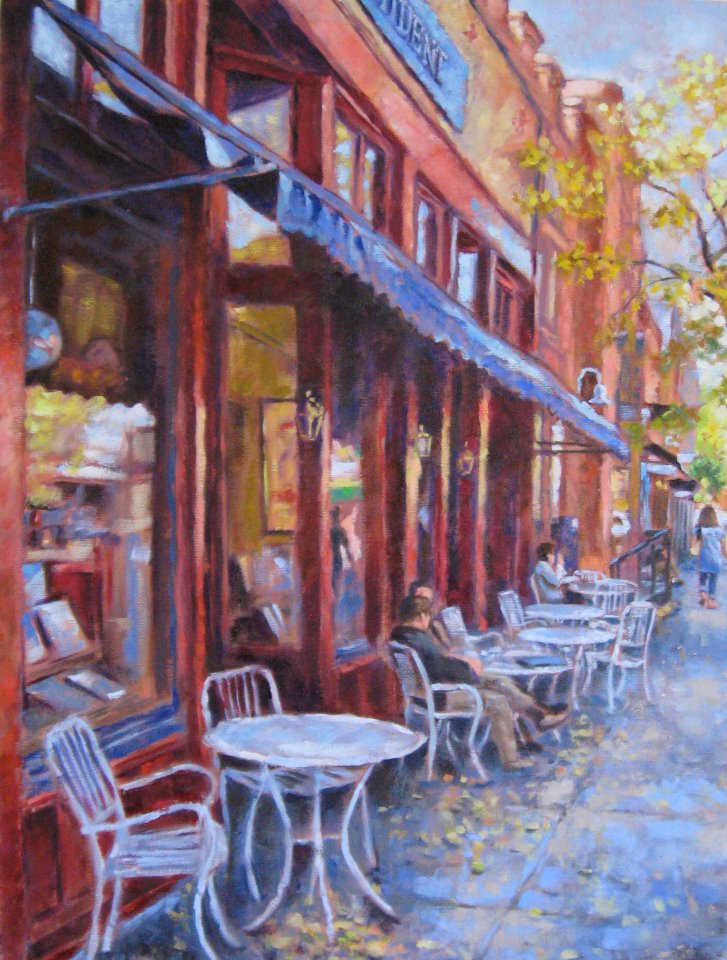 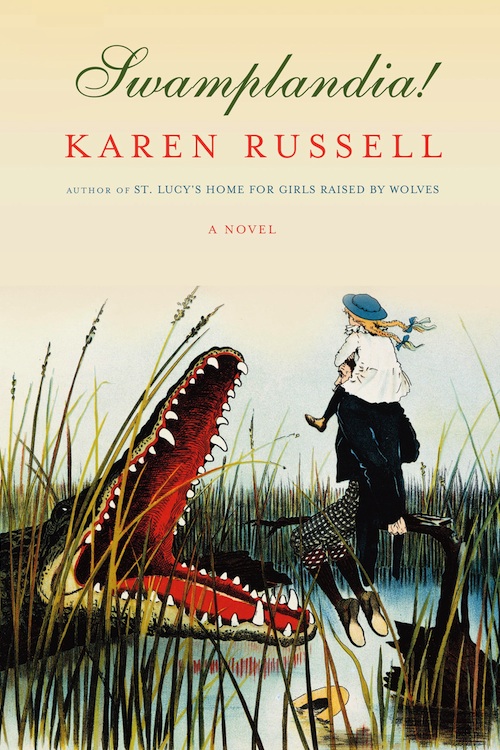