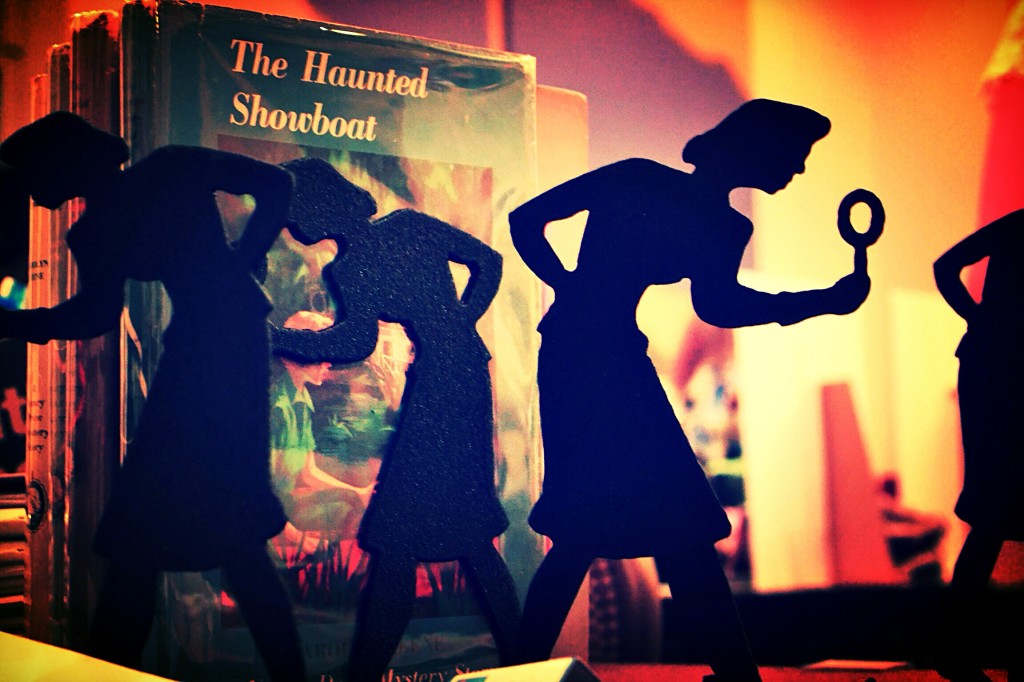 Discovering Nancy Drew was one of those moments in life that defined me – which I understand sounds a little drastic. It’s only a book series, right? Like any coming-of-age pursuit, whether it is Little League, or finger painting, or building houses from popsicle sticks – when you’re young and your curiosity is piqued, the smallest things can impact your life in the biggest ways.  Some kids had sports; I had books – an awkward, bespectacled little girl who lived vicariously through the bold strawberry-blonde detective as she set out on exciting adventures.

My mom shared Nancy with me, a remnant of her own childhood.  She helped me collect all fifty-six of the shiny yellow-spine ‘flashlight editions,’ which sat proudly on a bookshelf above my desk.  She would tell me with dismay of how her mom had discarded her own collection, and how she wished she’d still had them to pass along to me.

Nancy was both inspiration and escape.  As cliché as it sounds, I read my sturdy ‘flashlight editions’ by flashlight curled up on a canopy bed under a dusty-rose duvet in the hopes that I wouldn’t wake my sister, who was never a big reader and wouldn’t understand my urgency to finish the next chapter — or six. Every little girl has a role model, and Nancy was mine.  She was strong and independent, decisive and brave.  She protected her friends, maintained her independence, and was always quick to pack a suitcase and be off on a spontaneous adventure.  I may not have a little blue roadster (or the ability to drive it), but I have great friends, an independent spirit, and a wanderlust that has yet to be quenched. Thanks, Nancy. 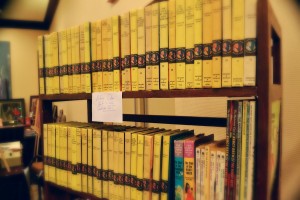 First published in 1930, the product of the Stratemeyer syndicate, Nancy Drew was created to expand on the syndicate’s previous success with children’s mystery stories such as The Hardy Boys as to include books targeted to the female demographic.  The series was penned by the mysterious Carolyn Keene, a nom de plume still used to this day.  In existence for over eighty years, Nancy Drew remains the spunky amateur detective that she has always been, but aside from her penchant for a good mystery, she is barely recognizable in 2013 from her original manifestation.  Trading telegram for text message, and shift dresses for tank tops – Nancy has changed with the times.  Yet, despite superficial wardrobe updates and technological advances, she remains timeless.

And I am not alone.  Nancy Drew is an icon for a reason – because children have found themselves in her, found strength in her, and escaped with her. I know countless individuals, traveling very different paths in life, who all cite Nancy as a central figure — my mom, a Literary Traveler contributor or two, the director of my graduate English program.  And, of course, Nancy Drew Sleuths president, Jennifer Fisher.

Nancy Drew Sleuths began as an internet discussion group in 2000, quickly expanding into a fan club that features gatherings, conventions and a comprehensive website that is a go-to wealth of Nancy knowledge. Fisher is a long-time Nancy Drew collector, scholar and enthusiast, and an expert on all things Drew.  She even consulted on the 2007 Warner Brothers film starring Emma Roberts. Fisher relays that it “was such a neat experience –getting to work with the director and getting to spend a few days during the filming on the set seeing how the movie got made and all that goes on in the background of filmmaking.”

Like myself and countless others, Fisher grew up captivated by the girl detective. “One of my first memories,” she admits, “is reading the books in my school library and being so fascinated by the stories to the point of sitting near them during library programs so I could peek in them.”

In addition to her research, writing and collecting, Fisher plans the annual Nancy Drew Sleuths conventions. The first one took place in Toledo, Ohio in 2001, although, according to Fisher, “it wasn’t considered a convention at the time, just a gathering of a small group of around 12 fans, but it was so much fun that we started planning them for each year after that.”

The conventions take place in a new location each year, picked based on the setting of a Nancy Drew mystery, and the theme of the convention involves exploring the real-life locations featured in that particular book.  According to Fisher, “we can follow in Nancy Drew’s footsteps and do things that she and her friends did in the books. It really helps bring the books alive for fans. So both the book and location go hand in hand.”

While the conventions have been happening for over a decade, Fisher’s favorite memory to date happened the first year.  “Meeting Mildred Wirt Benson at our first convention will always be a favorite memory. She was a very neat and intelligent woman,” Fisher raves, speaking of the original Drew ghostwriter working under the iconic pseudonym Carolyn Keene.

This year marked the 13th annual convention, and it explored Boston through The Secret of the Wooden Lady (#27 – 1950) and The Case of the Vanishing Veil (#83 – 1988).  The former finds Nancy and her best friends Bess and George investigating the haunting of a ship docked in Boston Harbor. The book takes Nancy from her fictional hometown of River Heights to Boston, Cape Cod and Provincetown.  The latter has a more contemporary Nancy, Bess, and George returning to Boston for a wedding, during which an antique veil goes missing prompting the girls to take the case and in the process travel from Boston to Salem.

With day trips to Provincetown and Salem, along with Boston-based excursions to please attendees who came from all over the country, the conventions seamlessly blend travel adventure with book discussion. Past conventions have taken place in New York, Phoenix, Chicago and Las Vegas.  One of Fisher’s favorite convention locations was the 2004 outing in New Orleans – focusing on The Haunted Showboat. While there will never be a convention held in River Heights, 2014 will find the Sleuths in San Diego, and in 2015 the 85th anniversary convention will be held in Hawaii – focusing on a personal favorite, The Secret of the Golden Pavilion. 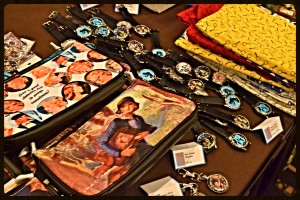 On June 2nd, Literary Traveler’s Antoinette and I stopped by the Boston-area convention day to meet some fellow Drew devotees and indulge in a little nostalgia of our own.  It became clear that many of the convention-goers are regulars, reunited yearly to share a common passion.  Presenters speaking on a variety of topics indulged in inside jokes with the audience, sparking good-humored banter and an abundance of laughter. Between presentations, sleuthing enthusiasts meandered from booth to booth, chatting and browsing through books, memorabilia and Drew themed collectibles.

Fisher admits, “We do have quite a few regulars–generally about 20 to 30 come just about every year. Though that number is growing as the years go by! I think it’s like a family reunion in some ways seeing each other again each year, we really have a lot of fun!”  Newbies fit right in and quickly become part of the Sleuth family through five days of activities, sightseeing, and conversation – bonding over their own unique ties to the popular girl sleuth.

While this convention was for Nancy Drew, the fans and collectors that attend have interests that go further than the one series.  Nancy Drew Sleuth Dean Burcham spoke to the crowd about Nancy Drew’s literary rivals and contemporaries– The Dana Girls, Judy Bolton, Cherry Ames, and Trixie Belden. 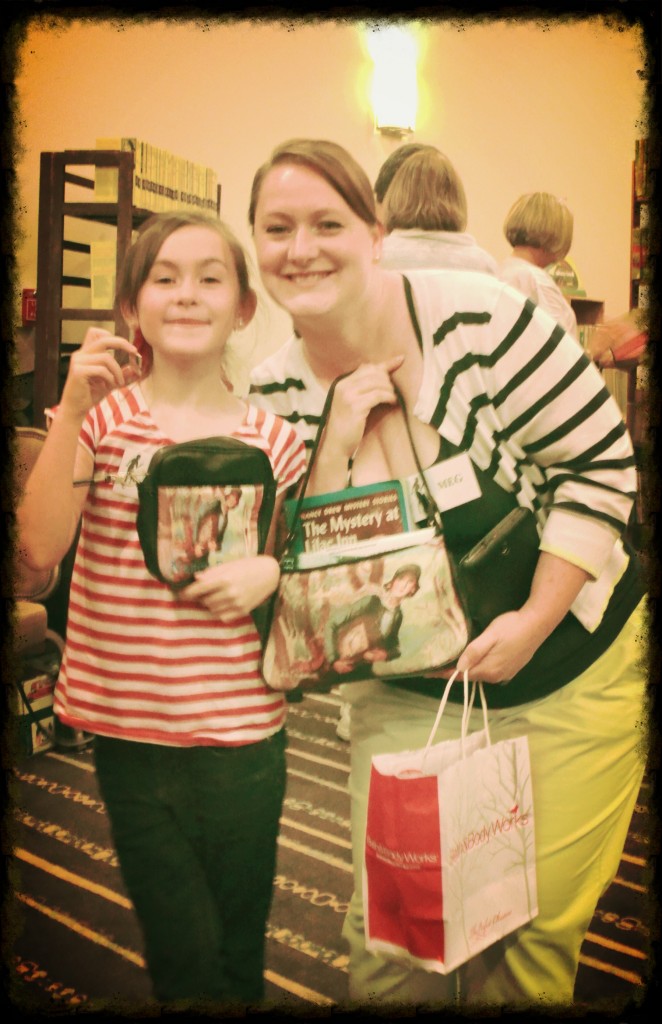 We were delighted to speak with mother/daughter convention goers Meg and Fiona.  Seven-year-old Fiona was psyched to be there with her mom, and she was quick to show off a miniature Nancy Drew book – a must-read for any dollhouse resident.  She spoke excitedly about her favorites, Nancy Drew and the Clue Crew, a contemporary series for the younger set.  Her mom, Meg, started reading Nancy when she was just about her daughter’s age and says the first fifty-six were her favorites, naming The Hidden Window Mystery as a stand-out title.  They proudly showed off their Nancy accessories and a new acquisition, Nancy Drew Ghost Stories.

Richard Mori, a book seller from Milford, NH, was also in attendance, and quick to distinguish that he specializes in “collectibles” and not used books.  He smiles as he speaks of his profession, saying that one day he woke up and realized that he had to do something he loved – and he loved books.  He has been a collector himself for over 50 years, with a particular affinity for the Boy Scouts Juvenile series.  He has been good friends with a fellow collector and Nancy Drew Sleuth, Jim, for 20 years and always enjoys showing him his latest finds, stating with a sheepish smile, “who else could I show it to who would appreciate it?” 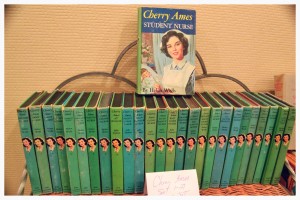 Later in the afternoon, we spoke with Linda, a nurse and collector from Pennsylvania whose booth boasted titles from a variety of classic series. While certainly a Nancy Drew fan, she cites her favorite girl detective as Judy Bolton, who also hails from PA. She has around 6,000 items in her personal collection, and she has been a collector since childhood, starting with the Bobbsey Twins before graduating to Nancy and eventually discovering the Cherry Ames series, which follows the adventures of a young nurse. Linda attributes her profession of 39 years to this childhood idol. When asked about her history with the convention, like Fisher, she fondly recalls meeting Wirt Benson in 2001. With a good-natured shrug, she laughs and says that her husband endearingly refers to the annual conventions as time with her “crazy book friends.” 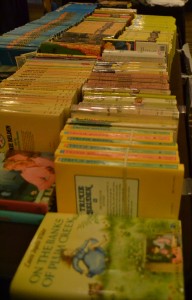 With so many Drew enthusiasts in one place, it is easy to see the impact that the girl sleuth has had throughout the years.  Attendees range in age from children to parents to grandparents – generations of fans together in one place with a collective interest that has clearly withstood the test of time.  Whether it be the Clue Crew, the original hardcover Nancy Drew Mysteries, or any of the other many embodiments of the girl detective — from her risqué 80s incarnation in the more adult Nancy Drew Files to her foray in to higher education with Nancy Drew on Campus  – it is clear that she is here to stay.

When asked what makes Nancy so enduring, Fisher reflects: “She’s timeless because she’s nostalgia — people’s childhood relived… I think as long as so many generations keep passing her down, she’ll always be a fond part of our childhood and for those of us who reminisce about her and collect her, our adult lives too.”

What does this say about the future of Nancy Drew, and what is in store for future generations of readers and collectors?  Whatever the answer, it seems certain that in one form or another, Nancy will be there to solve the mystery. 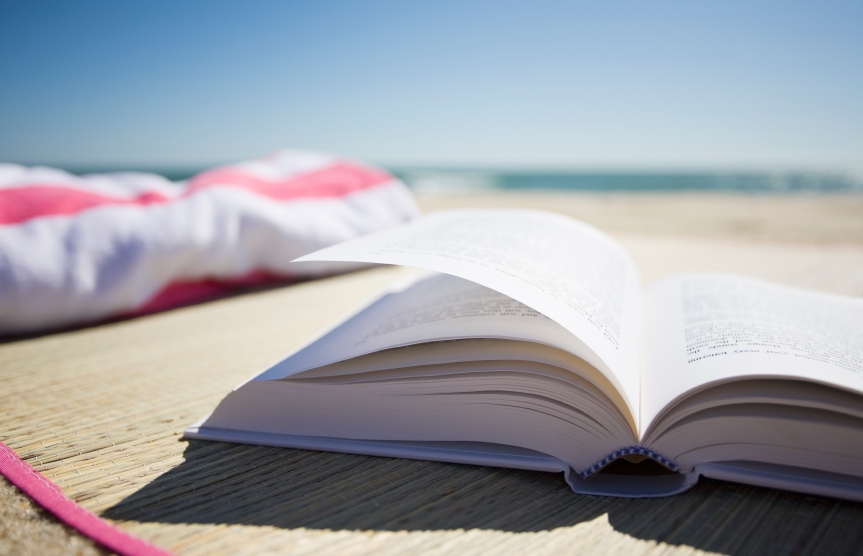 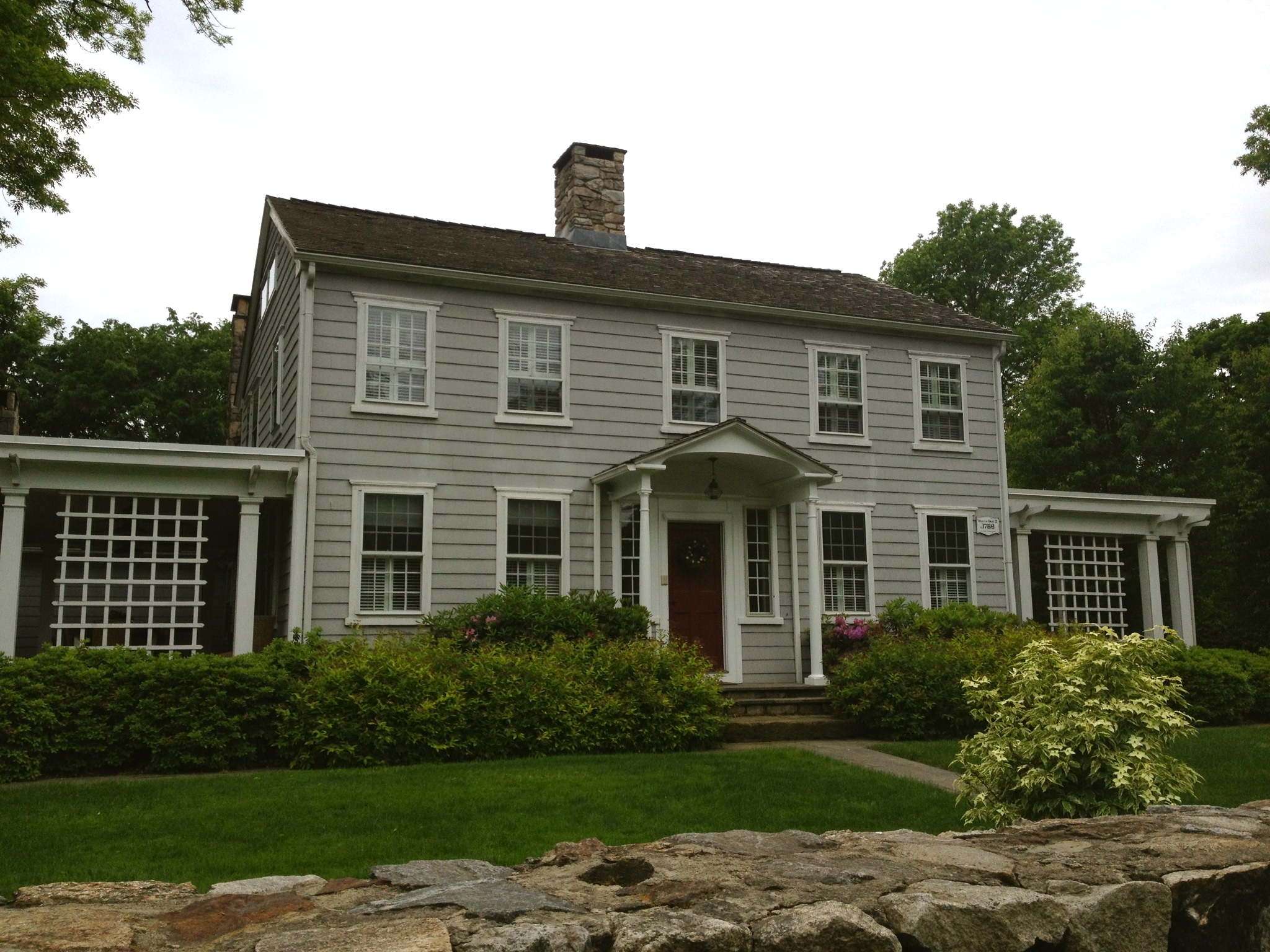