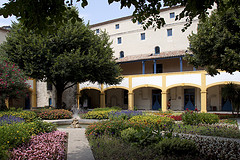 It’s late October, but the sun beats down on my bare head with the ferocity of an August heat wave. I stand at the entrance of Les Alyscamps, Elisii Campi, the Elysian Fields. It is the final resting place of Roman dead in Arles in the South of France. A cloying floral scent weighs heavily in my throat; it”s the scent of thousands of funerals over thousands of years. Tall straight trees line the walkway like sentinels or prison bars. I’m alone at the gates to the great necropolis in the open air, but I feel suffocated.

Once upon a time, thousands of bodies were lined up and stacked in the stone sarcophagi that line the path in front of me. My palms sweat—not from the heat—because I have a fear of cemeteries and the dead.

As I stand petrified, a family walks through the gates and breaks the tension with an audible snap. A toddler and a chocolate Lab jump and play, and I realize that today, the great fields of the dead are nothing more than a park—a place to commune with nature right inside the city. Besides, I’m not here to visit the dead, I’m here to view the ancient burial grounds that inspired two of Vincent Van Gogh’s haunting yet vivid paintings.

I walk through the gates to see the empty stone sarcophagi lined up in a tidy avenue. The trees along the walkway are more like tin soldiers in a child’s playroom than the ominous sentinels I imagined from outside the gates. Even the site of the great stone sarcophagi make me visualize Van Gogh’s paintings more strongly than the dead. No longer like an old house with too much history, it’s a sunny, summery day in a lovely outdoor setting. I imagine the grand necropolis is actually a bit sad, with its empty tombs and quiet avenues. The dead are gone. Here, it is the spirit of Van Gogh’s art that shines through.

One of the many ‘easels’ set up by the Arles Tourist Board shows Van Gogh’s painting Les Alyscamps.  In his time, as in ours, the place was a place to walk. In late 1880s, it was also a place to see and be seen—instead of casual shorts and t-shirts, people strolled in their jackets and gowns. Van Gogh and his friend Paul Gauguin’s pieces were painted in late autumn, and they captured the leaves from the poplars glowing with the colours of fall. Now, as the Provencal sun glimmers against the leaves, it has the same effect. In more than one hundred years, so little has changed in this place. Even then, the stone sarcophagi stood as only vague memories of the ancient dead.

The necropolis was once at the edge of town. Now, houses nestle close against every edge of the cemetery. My fear has dissipated, yet there remains a hush, a separation in this place  The sounds of the city are muted, and the buzz of cicadas drown out the closest noises. It’s as if being in Les Alyscamps cuts you off from the rest of the world.  I sit on one of the few stone monuments that doesn’t appear to be a sarcophagus and breathe slowly in and out, resting my head, resting my nerves, and dreaming of the past.

And then the spell is broken as the dog bounds by. I smile and set out to find some other place to tap into that collective memory. I pull out the Tourist Board’s glossy map of Van Gogh’s painting locations and start walking. I eventually find Place du Forum, a lively central spot in the old town. It’s a quintessentially French square, but over populated by tourists and outdoor cafes. The bustle is just what I need after the forceful relaxation of the necropolis, and I pull up a chair at a jaunty pirate-themed cafe with a perfect view of my destination. The cafe depicted in Van Gogh’s painting Cafe Terrace at Night is dead ahead.

The yellow cafe, a favorite tourist stop in the city, looks exactly like it did in the painting. It’s easy to imagine, like at Les Alyscamps, things might not have changed much. But the yellow in Van Gogh’s cafe was a reflection of the streetlights, possibly from a memory dipped like a paintbrush in absinthe. Even with people swarming Cafe Van Gogh (or Cafe La Nuit, depending on which sign you believe), it’s possible to picture Van Gogh sitting in the same place as I am, visualizing his art under the lamp light.

But things do change.  Things go missing, even in a city like Arles that actively cultivates its history. For example, the Yellow House—where Van Gogh lived with Gauguin, where Van Gogh fought with Gauguin, resulting in the loss of his left ear and his best friend—is gone. The Yellow House, which was located away from the centre near the train station, was destroyed by bombs during World War II.

The connection I feel to the past at the yellow cafe is tenuous, and since I can’t set off for the Yellow House, I use my glossy map to find the bit of the Rhone River where Starry Night Over the Rhone was painted. I wander through the old city to arrive at the banks of a dull brown river with large pale stones dotting the banks. People walk along the trail that follows the river’s course, but I have only one destination. I know there is another easel set up showing Van Gogh’s view over the Rhone one famous starry night.

I climb over rocks until I find it. The view on its own doesn’t seem like much. It could be any river. But my mind provides the star bursts and swirls, the inky blue darkness that Van Gogh created here. I know that if I stayed in Arles longer, I would have spent part of each night at the edge of the river, waiting to glimpse the glorious darkness that Van Gogh did. For now, I view by daylight, and hope my imagination can do it justice.

The final stop on my journey is the old hospital where Van Gogh attempted to recover after losing his ear, his home, his money, and his best friend. As I trek through the old buildings, I notice one designated ‘Espace Van Gogh,’ where the artist was confined and treated, sells trinkets and work inspired by Van Gogh’s art. I smirk with the incongruousness of it: if Van Gogh where alive to witness one of the many commercial testaments to his artistic legacy, what would he think? Perhaps he would be shocked that his name and work is so beloved. After all, he never saw the crowds of admirers when he was alive.

Despite the fact that the gift shop is delightful, I think there’s no way I’ll feel any closeness to the past here. When I step away from the bustle that surrounded me into the quiet courtyard where the hospital used to be, I’m suddenly alone as I was at Les Alyscamps. I begin to feel what I was missing at the other painting sites. With my back to the Espace Van Gogh, the courtyard looks the same as Van Gogh’s Courtyard of the Hospital at Arles from a decade before the turn of the 20th Century. I feel a connection to the past again.

The bright mixed with the pastels of the hospital courtyard hide dark memories. Here, like the courtyard Van Gogh spent the final days before his suicide, he continued to paint.  For the first time on my journey, alone in this old city courtyard, I truly feel the presence of the dead. But this time I’m not afraid. 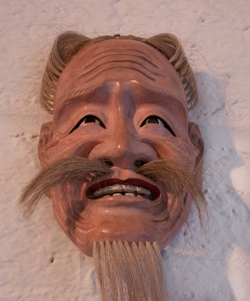