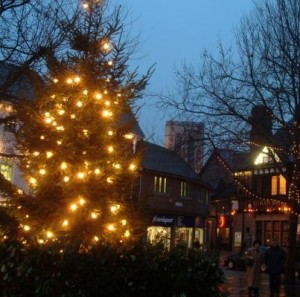 Some of my favorite memories of childhood are of the holiday season.  Sparkling twinkle lights decorating houses, turning their ordinary facades into magical winter scenes, evergreen trees decked out with delicate ornaments, and sipping hot chocolate by fireplaces.  These have become stock images for a reason, and each individual memory only adds to the power of the season.

Yet countless of these ‘memories’ are so strongly tied to literature that many of our own recollections of the season are inextricable from the books we read as children. The anticipation of Christmas Eve evident in Clara’s fantastical adventures with the Nutcracker, the importance of cherishing our loved ones in A Christmas Carol, and the true meaning of the season, spelled out, in How the Grinch Stole Christmas!.

I remember the first time I saw The Nutcracker on a school field trip–it seems to me now that the experience has become an amalgamation of memory, nostalgia, and good old fashioned Christmas spirit.  The famous ballet is actually based upon an 1816 German short story by E.T.A. Hoffman, in which a young girl (often changed from Marie to Clara in the ballet) is given a nutcracker on Christmas Eve. So begins a famous escapade into the thrill of childhood dreams, as Clara spends the night in a magical kingdom full of adventure and Christmas wonderment.

The ballet is a beautiful representation of the story, turning it into the iconic Christmas classic that it has become.  As the stage darkens and the tree begins to grow, one feels the excitement and the anticipation of what is to come in the magic Land of Sweets ruled by the infamous Sugar Plum Fairy.  Variations of the original are performed throughout the world, making way for the holiday season.

If you’re not a fan of the ballet, you might be more familiar with another staple to any discussion of holiday literature, Charles Dickens’ A Christmas Carol.  You cannot throw a snowball in December without hitting some adaptation of Dickens’ masterpiece.  Productions of the classic Christmas tale can be seen everywhere from community theater to the Disney Channel.  Bill Murray even embodied Scrooge in the 1988 film version, which presented a comedic reimagining of the familiar plot.  Dickens’ self-published the original novel in 1843 in the days before Amazon made it affordable to do so, and because of that, despite its critical success, the author did not make much of a monetary profit.  Scholars even suggest that we have Dickens to thank in part for our present day interpretation of the holiday.  Christmas trees, turkey dinners, greeting cards and carolers were popular traditions in Victorian England and Dickens transcribed them for future generations to carry on nearly two centuries later.

If you are at all unpleasant at Christmastime there is good chance that you are no stranger to the moniker ‘Scrooge.’  No, you say?  Perhaps you are more familiar with The Grinch, another infamous cautionary tale of a famously curmudgeonly character ultimately made to see the (twinkling Christmas tree) light.  The Dr. Seuss classic, How the Grinch Stole Christmas!, was originally published in 1957. Jim Carrey played the title character in the most recent 2000 film adaptation (Coincidentally, Carey also played Scrooge in 2009.  Typecast much?).  There’s a reason for the story’s longevity and popularity among both children and adults.  Sometimes, amidst all of the sparkling store displays and peppering of e-mails advertising online sales, it is easy to misplace the spirit of the season.  So, after a particularly grueling late December trip to the mall, or, perhaps, when you are unraveling your children’s Christmas list like it is part of the Dead Sea Scrolls, take heed the spirited lesson of Dr. Seuss and posit, as the Grinch does: “What if Christmas…doesn’t come from a store. What if Christmas, perhaps, means a little bit more.”

Regardless if it’s Dickens or Suess, or another holiday tale, everyone has a favorite written reminder of the meaning of the season that’s sure to bring out our inner-child.

My mom, for example, loves to regale family, friends and anyone within listening distance on December 25th with the tale of her most impressive daughter, a genius really, who, at one year old, could read aloud “Twas The Night Before Christmas.”  More realistically I was much older than that and it was probably more a recitation with the book propped open in front of me.  Also, I don’t believe her.  She insists there is an audio cassette of me doing it, packed away in the attic somewhere, but conveniently she’s never played it for anyone.  I do feel a little bad for the children in the family, nieces and nephews stumbling over the lyrics to “Jingle Bells.”  I might start a rumor that I saw one of them performing the Waltz of the Snowflakes from The Nutcracker and swear I recorded the whole thing as a video on my phone.  Later, I’ll claim it must have accidentally been deleted, or that the technology’s out of date. But I’ll swear it’s the true story, even if this particular child doesn’t grow up to be a ballerina.  Hey, it’s the holiday season, anything is possible.  If you don’t believe me, head back to Whoville and try to steal Christmas if you can.

Who Wrote ‘Twas the Night Before Christmas? A Literary Debate

The Real Story Behind Dickens’ A Christmas Carol