In The Symbolism of Poetry, W.B. Yeats writes:

“All sounds, all colours, all forms, either because of their pre-ordained energies or because of long association, evoke indefinable and yet precise emotions, or, as I prefer to think, call down among us certain disembodied powers, whose footsteps over our hearts we call emotions; and when sound, and colour, and form are in a musical relation, a beautiful relation to one another, they become as it were one sound, one colour, one form, and evoke an emotion that is made out of their distinct evocations and yet is one emotion.”

Standing atop the Cliffs of Moher, everything I had heard and read about Yeats finally began to make sense. Behind the cliffs and myself laid Ireland’s lazy pastures, where rolling hills and mountain tops served as the backdrop to Moher’s transcendental mystique. The roads that winded through the scenery made their way to the entrance of the cliffs and served as the line that separated the pastoral country from Ireland’s edge.

It’s hard to imagine just how opposite these two sights were, yet they are dependent on one another in culminating the emotions they evoke. I’ve never been the biggest fan of Yeats, but until his “Symbolism of Poetry,” I had never heard or read anything that explained so flawlessly the power of nature to extract the emotions it does, the freeing experience that occurs when nature and poetry collide. The Cliffs of Moher owned this disembodied power; its sounds, its colors, its varying landscape were at once one form, and through this unified form, evoked within me an unparalleled sense of euphoria and serenity. In the past, I believed I had experienced these feelings, whether together or separately, but the Cliffs of Moher taught me differently. As I stood looking out on the North Atlantic, I truly experienced these emotions for the first time, and together they formed something that I had never come close to feeling before, one emotion: the sublime. 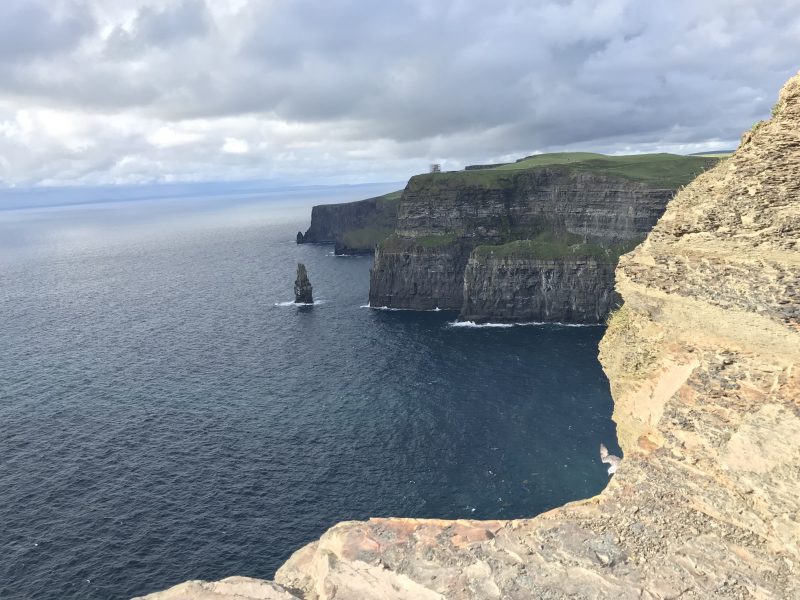 There are few places I have seen that have had the power to make me feel equally euphoric and serene. I’m always dying to escape the monotonies that have come to make up my everyday life, whether I’m craving a hike, hoping it’ll help me get back in touch with my soul and recapture that fleeting moment of tranquility which only nature’s arms can bestow, or dying for just an instant’s taste of the thrill that an amusement park ride or canopy zipline can offer. It’s usually either, or: serenity or euphoria, but rarely both simultaneously.

I can think of one other instance off the top of my head, perhaps more if I really tried, but in this moment I can only recall these duel feelings being evoked once before: when I was parasailing off the coast of Islamorada. The only thing keeping me in the air was a rainbow-colored parachute, and the only thing keeping me tethered to the boat was a thread—or that’s what it seemed like when my feet were dangling hundreds of feet above the open Atlantic. You can’t hear anything, you’re just aware: Aware of the alluring ocean and all its predators below that you’ll be subjected to if you fall; aware of the hundreds of people just beyond the shore, but so out of reach that they’re effectively nonexistent; aware of the seemingly endless horizon that you can’t touch no matter how long you sail towards it. The only thing in existence seems to be the whistling of the air in your ears and your own consciousness.

Hook Lighthouse in Ireland was a close second in evoking the dualism of euphoria and serenity. Like the Cliffs, it too shared its view with lazy pastures in the distance, while a road stretched from behind those pastures all the way to Hook’s edge, where stone slabs (that we were warned not to walk on) jutted out into the ocean. The striped lighthouse stood confidently at the cliff’s bend, supervising the ocean and its travelers on one side, and the tourists walking through its fields on the other. A café and playground sat comfortably, watching as the bold walked down onto the stone-faced beaches, while the shy stood trepidatiously on the verge of grass and stone. A dirt path ran along the edge, separating the grass field from the stone slabs that extended themselves out, welcoming the Atlantic to wash over them.

The slabs laid out flat like stone beaches inviting us to venture out to them and set up camp with our towels and coolers, but then those pesky waves would come with what seemed like the force of a typhoon, calling my attention to the sign notifying visitors of a spot where someone had slipped, fallen, and died. The troughs of the trenches were deceivingly protected. By the time the waves reached between them, they were no stronger than a normal tide washing upon the shore. I imagined myself walking between them, but once down, it was hard to imagine finding an easy way up. I admit these dangers appealed to the side of me that craved risk, but often, the splendor would be overshadowed by an influx of tourism. The busy café, noisy playground, the people audaciously walking on the rocks below you, they all took away from the serenity. When I close my eyes, I can see and hear all of those interruptions, so while the euphoria is present, the traffic distracts from the peace.

In comparison, the Cliffs of Moher extracted so much more out of me than can be compared to parasailing or anything I’ve experienced. Yeats attests the same relation between emotion and poetry, that it “exists between all portions of every work of art,” but “no two modulations or arrangements evoke the same emotion.” Laying on my stomach, looking down at the turquoise waters, nearly 800 feet below, my spirit took flight. Every fiber of my being was alive with the electrifying sensation of knowing one strong wind, of which there were many, could send me flying over the edge. If I stood up the wrong way, took one wrong step, or inched one inch too close to the edge, my ecstasy would turn deadly.

Throughout our travels in Ireland, my notions of beauty were far surpassed with every sight we visited. I remember a peer commenting early in the trip, “you think you know what beauty is, you have this idea of it in your head, and then you go to some of these places and realize you didn’t actually know what beauty was at all,” and she was right, and those words echoed in my brain with every new setting. It seems from the very beginning of our trip my eyes were overwhelmed with more beauty than I could take in and I was forced to reevaluate my own definition of the word. I have these fantastic images in my head of the places we saw, but they are but snapshots of the feast. When I close my eyes, I can see Hook in my mind— but it’s a fantasy. The photos add this validation. They make it real, without the exaggeration or embellishments of my subconscious or emotions, just the place in its normal form. It can be fun to compare the two—the image I have in my mind and the one on my phone. Where do I embellish? At what point does my memory of these places become myth? Sure, those memories make for an excellent daydream, but there’s something refreshing about the reality of the actual place as well. Perhaps that’s why the Cliffs of Moher took my breath away, there’s no need for my mind to embellish. When I close my eyes and look at the picture, the images I see are the same.

But these feelings didn’t strike me until I was standing on the steps leading to O’Brien’s Tower. Yeats writes, “the more perfect it is, and the more various and numerous the elements that have flowed into its perfection, the more powerful will be the emotion, the power, the god it calls among us.” There I was. Surrounded by the innumerable elements that flowed into Moher’s perfection. To my right there were the quintessential Irish pastures with cows and sheep moseying along their days, totally unaware that their view was one of the best in the world. Beneath my feet were stone steps leading to the tower, separating the pastoral from the edge of the world. In front of me, O’Brien’s tower stood on the highest point of the cliffs, overlooking an endless sea; and to my left was that very endless sea, and its infinite world.

However, this was not where the euphoric and serene sensations peaked, in fact, they had barely begun to take fruition. Paths wound up the cliffs; there was one safer route further away from the edge, accompanied by a railing, and another for the more daring traveler, laying wide open, a foot away from the cliff’s edge. That was the path to serenity— where you forget you’re standing on the edge of Ireland and suddenly, you’re on the edge of the earth itself. When I laid on my stomach and peeked over the edge, I was utterly transfixed by the beauty. The cliffs stretched down to meet the water, grass and purple flowers speckled each jutting stone. Nature blotted out the fear and replaced it with intrigue. How can something so dangerous be so lovely?

The water was the richest shade of turquoise I’d ever seen; I wanted to reach down and collect just a drop to save in a locket and wear around my neck. As I continued my walk to the end of cliffs, I could see it all. The gaping sea was in front of me, bordered by cliffs that stretched to the sky like giants waking up from a nap. The point in which the water and horizon met was blurred by low-hanging clouds, allowing the cliffs to stand tall in an endless world in which they reigned. And in that moment of euphoric serenity, it occurred to me: Yeats was right.

Savannah Barrow is a writer from St. Simons Island, GA. She holds a Bachelor of Arts in English and a minor in Writing from Georgia Southern University. She is currently finishing her Masters of Art in English at Georgia Southern University, where she also works as a Graduate Assistant and instructor of World Literature. In her spare time, she writes Fiction and Creative Nonfiction. She has experience writing for college newspapers and online magazines, and she will be presenting her research on Patricia Highsmith’s The Price of Salt at the American Literature Association Conference in May of 2022. Upon finishing her MA, Savannah hopes to pursue a career in academia or in the publishing industry. She can be followed on Twitter at @savmbarrow and on Instagram at @savannah_barrow 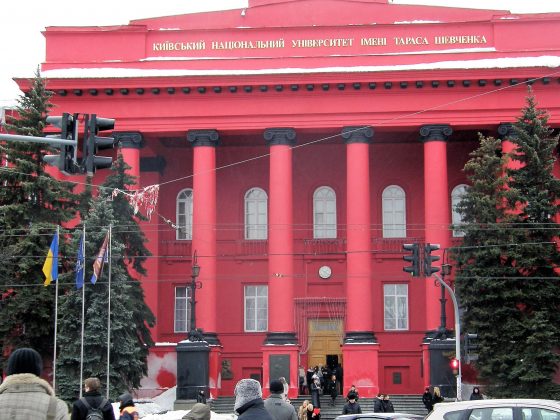