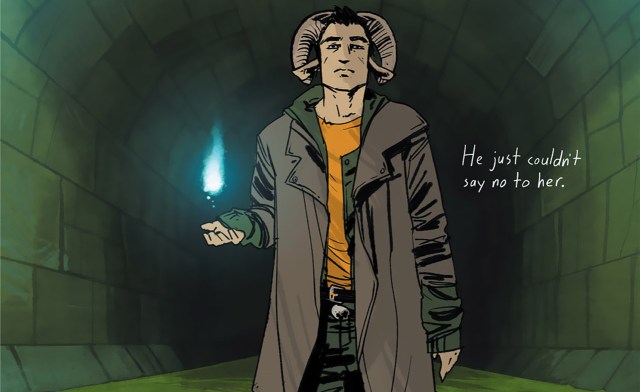 Saga Vol. 1 opens with a singular image of a woman’s face. Her teeth clenching together, sweat pops off her forehead and a small sentence snakes across the top of the page stating, “This is how an idea becomes real.” The reader is never fully informed on the idea, but turning the page, one can assume. The woman is giving birth—as expected. And she has what looks like dragonfly wings protruding from her upper back—as not expected. The man who she is screaming at emerges from underneath her skirt in the panel below, revealing a glowing and doting soon father-to-be. He has curly goat horns coming out of either side of his head. The narration snakes again, “But ideas are fragile things.”

Saga Vol. 1 is a fantasy romance graphic novel and if you’re not open to this level of geekery, don’t bother reading further. Because Saga is dragonfly wings and goat horns. It’s humans with TV heads, spidery monsters, unicorn women, spaceships, sex, murder, child prostitution and a fairly sizable galactic war. Saga is a lot. To the non-fantasy fan, it encapsulates the word “campy” and then some.

We couldn’t expect anything less from writer Brian K. Vaughan whose storytelling brought comic book fans classics like Y: The Last Man (a dystopian science fiction comic series about the last man on earth) and Ex Machina (a story about the world’s first and only superhero who is elected Mayor of New York City after 9/11). The Saga series has been praised by fans around the globe as Vaughan’s best work yet. Vaughan teams up with illustrator Fiona Staples whose gritty and vulgar visual style brings Vaughan’s 2-dimensional dialogue to life. Their pairing is a good reminder of the collaborative effort involved in graphic story telling. Staples’ images breathe life into Vaughan’s story. Just as Vaughan’s words illuminate Staples’ pictures. One without the other would be, well, quite boring.

This co-dependence is appropriately paralleled with the story they are telling. Saga mirrors the epic love stories of our time. It has garnered constant comparisons to Star Wars, Game of Thrones, and Romeo and Juliet. Saga is the story of two star-crossed lovers on the run from their warring homelands. The screaming mother from the first page, Alana, is from the planet Landfall, which is the largest planet in the galaxy. Marko, her annoyingly sweet and liberal husband, is from Wreath, Landfall’s moon. They are from two very different cultures that have been at war with each other for so long that the origin of the conflict is a little blurry.

Alana and Marko met on the planet Wreath, where Marko had been taken prisoner. Alana was his guard. They fell in love and deserted, which got them into a whole lot of trouble with their respective planets. But they ran and kept running regardless of who was chasing them and their love grew. Saga Volume 1 is a short snippet of their journey and covers roughly the first two weeks of their child’s life. It’s a rather busy two weeks as the family is being viciously hunted as they cross the planet Wreath attempting to escape.

As a fan of all three of the previously mentioned epic tales, I don’t consider Saga on par. Its characters and dialogue have a tendency to be too predictable and the story moves too easily through difficult moments that deserve more depiction of struggle. Alana and Marko’s love feels, to me, too easy in the face of the chaos that surrounds them. But this is, of course, how Saga distinguishes itself from the other stories its been compared to.

Saga’s most successful point is that love wins. In Saga Vol 1 love transcends boundaries of war and culture with ease. Alana and Marko’s struggles are lessened by the strength of their love. And we know that love ultimately wins because the story is narrated by Hazel, the child Alana gives birth to in the first scene. Hazel notes at some point in her narration that she is alive in the future and is living in a better world. So regardless of what happens after, Saga Vol 1 ends with the reader understanding love ultimately triumphs. Ideas may be fragile things in this story, but love is not. 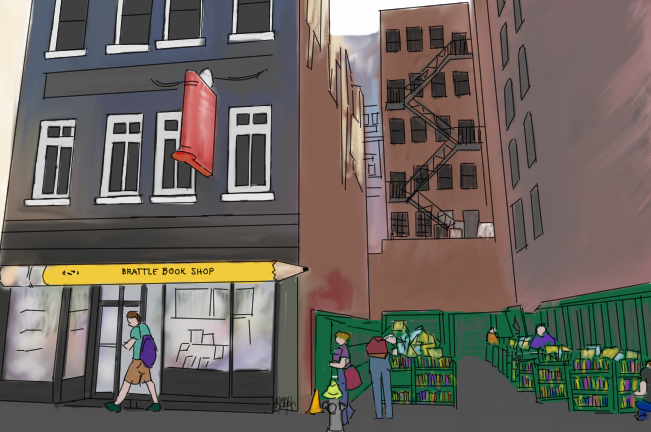 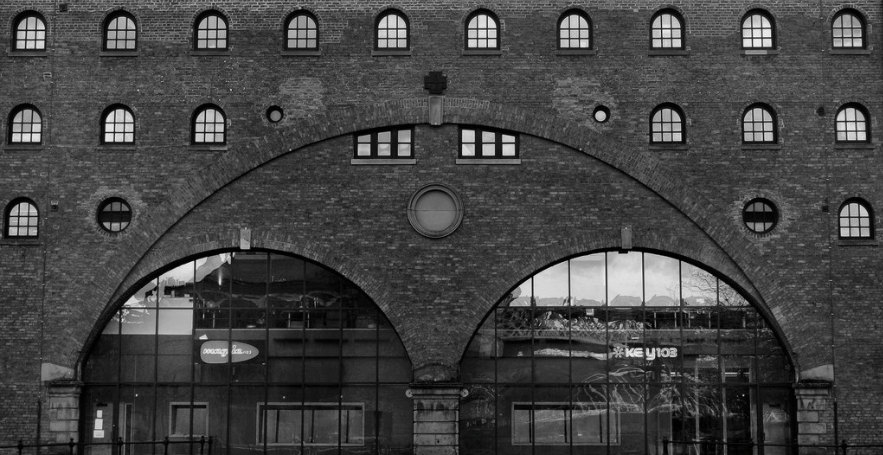