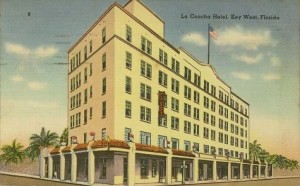 “Then we came to the edge of the stream and the water quit being blue and was light and greenish and inside I could see…the wireless masts at Key West and the La Concha hotel up high out of all the low houses”  – Ernest Hemingway, To Have and Have Not

If you are planning a trip to Key West, there are plenty of hotels to choose from, but for the literary traveler the choice is easy.  Dating back to 1926, and listed on the National Register of Historic Places, the La Concha not only provides you with luxurious accommodations amidst the excitement of popular Duval Street, but it also gives you access to a lush history without even leaving your hotel room.  The La Concha boasts a rich past, with former guests running the gamut from Harry S. Truman to Al Capone, and of course, literary legend, Ernest Hemingway.

At only seven stories high, the La Concha is the tallest building in Key West and one of its best known features is its rooftop bar and observation deck, which offers incredible views of the infamous Key West sunsets.  It is easy to picture Hemingway tossing back a daiquiri against a backdrop of dusky island ambiance.  In fact, he started work on his 1937 novel, To Have and Have Not, in a suite at the La Concha.  The novel, set in Key West, pays homage to the hotel, noting its prominence on the horizon as the protagonist, Harry Morgan, leaves Key West for Cuba.

Hemingway initially made the move to Key West with his second wife, Pauline, at the suggestion of fellow writer John Dos Passos.  In 1936 he met Martha Gellhorn at his favorite watering hole, and present day hot spot, Sloppy Joe’s.  If the walls of the La Concha could talk they would tell tales of their affair, which ultimately led to his third marriage.  For the true literary traveler, a stay in Hemingway’s suite at the La Concha is a very real possibility. While in Key West you can definitely walk a mile in his shoes, but why not kick off those shoes and spend a night in his suite?

While the literature aficionado and history buff alike will take pleasure in sitting where Hemingway sat as he penned his classics, a warning to those looking to stay in the room where he wiled away his days.  According to a chapter on the hotel in Greg Jenkin’s Florida’s Ghostly Legends and Haunted Folklore, strange and possibly otherworldly happenings have been reported in the suite, and one possible culprit is believed to be the ghost of a mischievous Hemingway playing tricks on guests who have taken over his space.  For those who enjoy a little mystery with their history, a tour of haunted Key West landmarks actually starts in the lobby of the La Concha.

For further information on Hemingway’s ties to Key West and the La Concha check out Shannon McKenna Schmidt and Joni Rendon’s 2008 literature themed travel guide, Novel Destinations, a very comprehensive handbook for the literary traveler that The Chicago Tribune calls “a fun read whether for armchair travelers or actual literary pilgrims.”  Now doesn’t that sound like a great book to peruse en route to Key West?  So pack your bags, find a sitter for your six-toed cats, and we will meet you on the rooftop of the La Concha for a mojito in Hemingway’s honor. 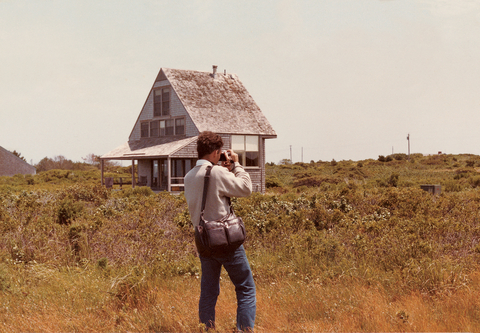 The Irrational Allure of Writers’ Houses* 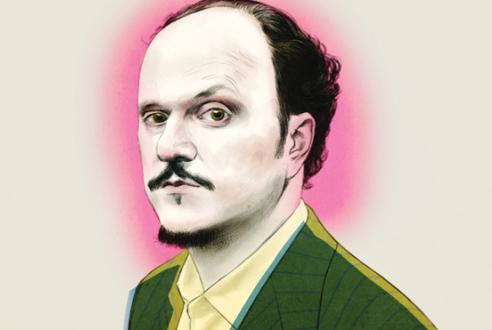